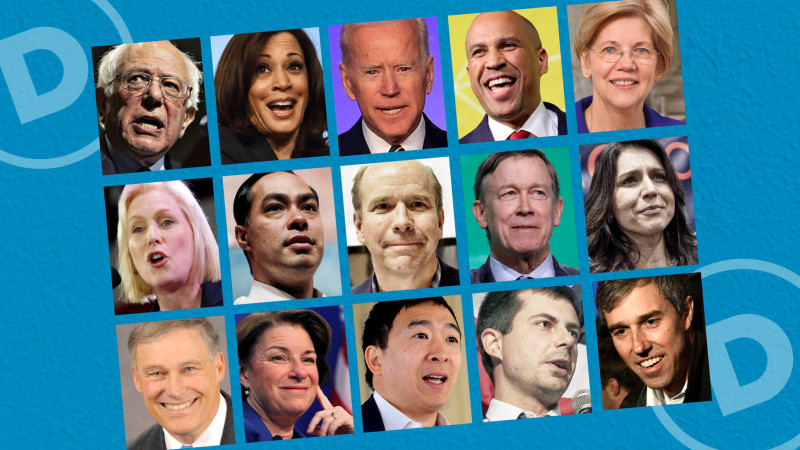 COUNCIL BLUFFS, Iowa — As Peter Johnson and Emily Neal waited for Senator Kirsten Gillibrand to arrive at Barley’s, a brick-lined sports bar in southwestern Iowa, they gamed out possible nominees in the Democratic presidential primary.

Mr. Johnson, a 27-year-old law student, said the large field was a great equalizer, and “if at the end of it we get an old white guy, someone who represents the status quo, it’ll be because they’ve proven themselves.”

Ms. Neal, a dental hygienist, made an agonized face at Mr. Johnson, her boyfriend. Wouldn’t something be lost, she asked, if the historically diverse slate of 2020 Democrats was passed over?

“Personally, I’d love to see a woman,” Ms. Neal, also 27, said at the event on Thursday night. “If people are being catty and holding gender or race against a candidate, it would break my heart.”

As former Vice President Joseph R. Biden Jr. prepares to enter the 2020 race this coming week, Democrats have seen the strong diversity in their field — with candidates like Senators Elizabeth Warren and Kamala Harris reflecting the multiracial and largely female base of the party — become somewhat overshadowed by white male candidates. Senator Bernie Sanders has a wide fund-raising lead, he and Mr. Biden lead in polls, and former Representative Beto O’Rourke and Mayor Pete Buttigieg have enjoyed outsize attention from voters in early primary states, extensive media coverage and viral success with online donors.

Interviews with several dozen Democratic voters around the country show how the party, which enjoyed victories in 2018 that were powered by female and nonwhite candidates, is now grappling with two complicated questions about race, gender and politics in the Trump era.

Is a white man the best face for an increasingly diverse Democratic Party in 2020? And what’s the bigger gamble: to nominate a white man and risk disappointing some of the party’s base, or nominate a minority candidate or a woman who might struggle to carry predominantly white swing states like Wisconsin, Michigan and Pennsylvania that both Barack Obama and President Trump won?

Pam Van Arsdale, 64, of Bedford, N.H., said she would like to see a minority or female candidate catch fire, and worries that nominating a white man could cause some liberals to skip voting in November 2020.

“I consider myself a centrist, middle-of-the-road Democrat. And the progressive side worries me. What are they going to do? Are they going to sit it out if they don’t like the top candidate?” she said while attending a recent event for Senator Cory Booker.

But Lee Kujawa, 72, of Wauwatosa, Wis., near Milwaukee, made a case for Mr. Biden, seeing him as “the most electable.”

“He can stand up to Trump,” said Mr. Kujawa, who said he believed the party would not pay a penalty by nominating its first white man since John Kerry in 2004. Referring to Mr. Biden, he said, “He could pick Kamala Harris as a running mate; she’s one of my top three favorites.”

White men have largely ruled both the Democratic and Republican parties throughout American history, even as they have declined to roughly 30 percent of the population, and many voters still have preconceptions of presidents as white and male. Mr. Biden and Mr. Sanders are starting off with other advantages as well: They are the best-known candidates at this stage, both with experience running for president, and they are well positioned to have the money and resources to compete through the 2020 primaries.

But as older white men, they are out of step with ascendant forces in the party today.

Women, minorities and young people are fueling much of its energy, and they are well represented by multiple well-qualified, politically savvy female and nonwhite Democrats who are running. Ms. Harris in particular has had a strong start in fund-raising, and only Mr. Biden and Mr. Sanders consistently outpace her in polls.

The party also has a new primary calendar for 2020 that could help these candidates: The diverse Democratic electorates in California and Texas will vote earlier than usual, and candidates like Ms. Harris and Mr. Booker could also benefit from the sizable black vote in the early primary state of South Carolina

Many of the voters interviewed said that the most important qualification was the ability to defeat Mr. Trump, who has come away from the recent release of the Mueller report more angry than elated and wants a political victory untainted by questions of legitimacy. To some, the best Democratic candidate will be one who can wrest voters who backed Mr. Trump in battleground states like Pennsylvania and Wisconsin, as Democrats did somewhat successfully in 2018 to flip the House.

Jason Pinkowski, 35, who lives in the Milwaukee suburbs, crossed off several Democrats — Mr. Biden and Mr. Sanders because they are too old, and Mr. O’Rourke because he is too young — to arrive at Mr. Booker and Ms. Harris as his current favorites.

“Long story short, if a Democrat decides to put time in the Midwest, I think he or she will have a good chance,” he said.

The presumption that Democrats will turn out in force to beat Mr. Trump, no matter who the nominee is, has hurt the party before. Hillary Clinton, her campaign strategy, the news media and the F.B.I. have all been blamed for her loss. For whatever reason, she lost votes in Michigan and Wisconsin in 2016 compared with Mr. Obama in 2012, including a notable falloff among black voters.

Mr. Trump, in turn, energized the Republican base, which appears to remain loyal to him for the most part, and also won over some Midwest voters who once backed Mr. Obama.

David Pepper, chairman of the Ohio Democratic Party, said the key to threading the electoral needle in 2020 was a diverse presidential ticket able to stop the hemorrhaging of white rural voters and to excite minority voters. He pointed to Senator Sherrod Brown’s success in Ohio in appealing to both electorates in his 2018 re-election in a state that otherwise voted for Republicans in statewide campaigns.

“If between the ticket you have someone who’s got that economic populist brand of a Sherrod Brown, but also the diversity that will energize Cuyahoga County so that you have a margin of 200,000-plus versus 150,000, I think you win Ohio and all the rest of those Midwest states,” Mr. Pepper said. He was referring to the Democrat-rich county dominated by the predominantly black city of Cleveland. (To be sure, Mr. Trump won Ohio by eight percentage points in 2016.)

Others see the focus on electability as too limited — and even as an underhanded way to discount black and female candidates.

For this group, which includes voters and several political observers who focus on race and gender, there is a particular annoyance around code words they feel unduly penalize candidates. Questions about which contender is “electable” and who can “bring the country together” distract from areas where female and minority candidates may lead the pack, including policy proposals and who best energizes typical nonvoters.

Compounding these frustrations have been Ms. Warren’s campaign fund-raising struggles and the early buzz around candidates like Mr. O’Rourke, who himself has acknowledged that he benefits from white male privilege.

“Bringing the country together won’t happen right now, so just vote for the best progressive policy,” said Kyrsten Matthews, 29, who attended Ms. Warren’s Birmingham, Ala., rally. “I know that’s what I’m going to do.”

For some voters interviewed during Ms. Warren’s tour throughout the South, which included stops in heavily black communities in Tennessee, Alabama and Mississippi, there was interest in candidates such as Mr. O’Rourke, Mr. Sanders or Mr. Biden because of factors unrelated to identity.

In Selma, Ala., Roderick West, 62, said he was looking to support Mr. Biden because of his experience as vice president. Supporters of Mr. Sanders say his calls for wide-scale change in the country’s economic order make him a transformational candidate, regardless of skin color. And some admirers of Mr. Buttigieg say that, as a gay man, he brings diversity to the field and would be a history-making nominee.

In conversations across eastern Iowa, Democratic voters acknowledged a feeling of whiplash after a midterm campaign defined largely by the success of women and people of color. Many of those interviewed seemed almost resigned to having a white male nominee, reserving their angst for what they view as a greater priority than diversity atop the Democratic ticket: defeating Mr. Trump.

“It’s important to appeal to Republicans. I don’t know if a minority candidate can do that,” Catherine Rohret, who will turn 18 in June, said moments after watching Mr. O’Rourke campaign in Waterloo, Iowa. “It hurts me to say because I’m a black woman. I would love to see a woman candidate.”

Rachel Cox, 35, from Iowa City, seemed exultant despite frigid temperatures moments after meeting Mr. O’Rourke at a St. Patrick’s Day 5K in North Liberty, Iowa. A former Texan who waited until after the 2018 midterms to switch her registration to Iowa — so she could vote for Mr. O’Rourke — Ms. Cox said that a white male candidate might be better positioned to build a winning coalition.

“There could be two sides to that story,” she said when asked if nominating another white man could depress turnout in some corners of the party. “Beto could bring a lot of moderate Republicans who are maybe a little bit averse to voting for women or voting for minorities.”

Ms. Cox had good reason to be concerned about the role of discrimination in voter choices. In several instances during Ms. Warren’s Southern tour, men who attended an event with the Massachusetts senator dismissed supporting her candidacy using sexist terminology.

“Trump will run over a woman,” Carl West, 64, said as he walked to see Ms. Warren at the historic Edmund Pettus Bridge in Selma, Ala. “He’ll just run a woman into the ground.”

Diane Henning, 70, a retired bookkeeper outside Milwaukee, disagreed sharply. She said it would be a mistake for Democrats to nominate a white man in 2020.

“There are so many good women out there who could do the job,” she said. “I think women are a lot more open-minded, we certainly have been all of these years.”

For Hannah Reid, 22, who is a graduating senior at the University of Tampa and heard Mr. Buttigieg at an event recently, her decision making on a Democratic candidate will go beyond identity.

“I am a woman of color, but that’s not all that I am,” said Ms. Reid, who is black. Referring to Mr. Buttigieg, she said: “He’s in the L.G.B.T. community, which is something we’ve never seen before. It’s got to be about more than just who you are; it’s got to be about what you think and what you say, what your ideas are.”