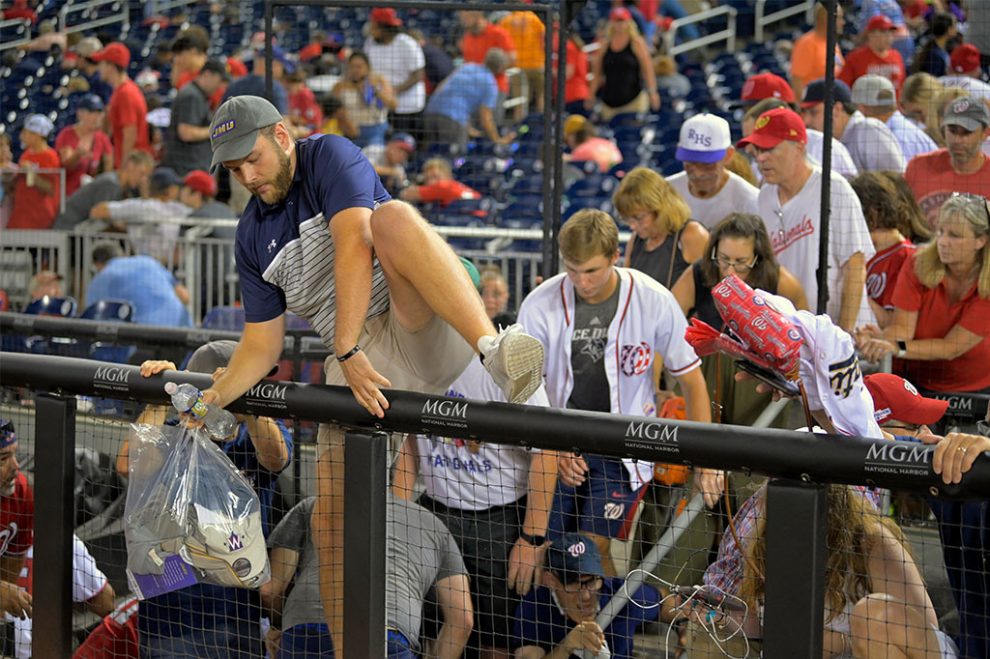 A shooting outside the Nationals-Padres game in Washington, DC, led to a chaotic situation inside the ballpark as fans and players scrambled for cover.

Gunfire could be heard inside the stadium as stadium announcers cautioned fans to remain in the stadium:

Reports of Gunshots outside Nationals Park during the San Diego @Padres vs Washington @Nationals game. pic.twitter.com/7Vy1GmcISh

If you listen closely as MASN is going into the commercial break, the gun shots can be heard and you can see the #Nationals players turn around as they head into the dugout as they host the #Padres pic.twitter.com/xBhnRvNN2L

According to the Nationals, the shooting occurred outside the Third Base gate:

A shooting has been reported outside of the Third Base Gate at Nationals Park.

Fans are encouraged to exit the ballpark via the CF and RF gates at this time.

We're working with law enforcement to provide more information as soon as it becomes available.

Fans are taking cover under seats

Helicopters are now circling the stadium

The game was suspended with the Padres leading 8-4 in the 6th inning:

Tonight's game has officially been suspended with the Padres leading the Nationals 8-4 in the middle of the 6th. It will be resumed tomorrow at 1:05 p.m., in advance of the originally scheduled series finale.

According to Fox 5 in DC, two victims were found shot outside the stadium, with two others seeking treatment at a local hospital.

According to the Associated Press:

Two people were shot, said Dustin Sternbeck, a Metropolitan Police Department spokesman. Investigators believe, based on preliminary information, that one of the victims was an employee at the stadium, he said.

It is unknown if the shooter has been apprehended.