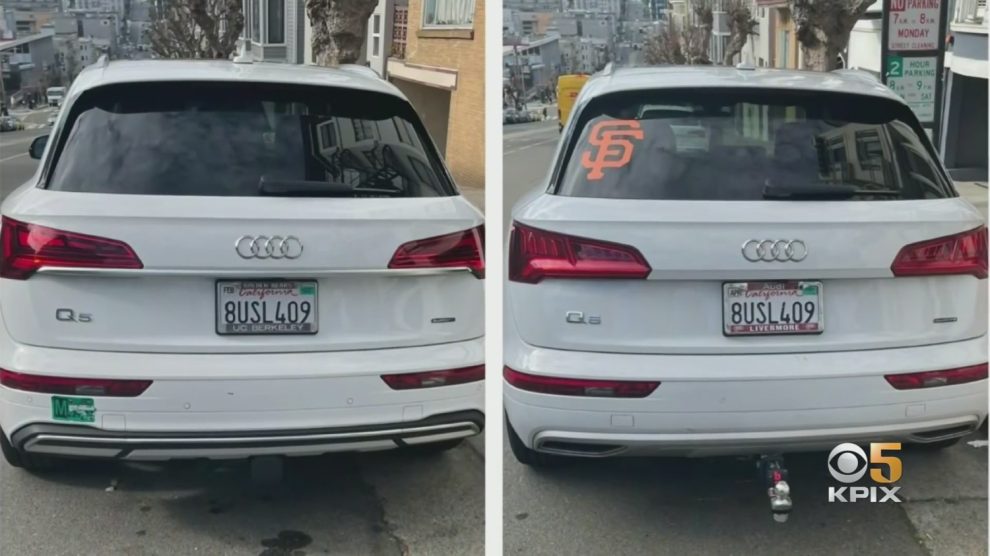 A San Francisco woman who had her car’s front license plate stolen uncovered much more than her property when she went searching for it on Monday.

KPIX 5 first reported on thieves targeting license plates in San Francisco on Saturday. Crooks are screwing them onto cars of the same make and model. Katie Lyons found multiple parking citations online in the last week, when she went to pay for a legitimate ticket.

She decided to circle the Nob Hill area where the driver had been ticketed, and came across her stolen plate on an identical Audi Q5 on California Street near Leavenworth Street.

Detectives found tools, including several long screwrdrivers, inside what turned out to be a stolen car. Lyons said SFPD detectives are now investigating whether it’s been involved in other crimes.

“I was not expecting to see the car recovered, so I’m really grateful to the SF police department and to Katie Lyons,” said Joe Hirasawa of San Francisco.

The stolen car belongs to Hirasawa, who received a call from an officer Monday. Someone took his Audi at Ocean Beach back in November. The longtime surfer said he’s always careful about hiding his car keys in a discreet location. But on that day, someone found them.

Lyons’ front plate was screwed onto the back of Hirasawa’s car. His Audi also had a stolen front plate.

It’s all part of a larger, sophisticated operation designed to make criminals untraceable.

“I think it’s indicative of the scale of the operation. It sounds like I suppose that if my car is the one that has the motherload of tools to rob other people that did this, more power to them, I’d love to see it happen,” said Hirasawa.

Supervisor Catherine Stefani met Lyons, a Marina resident and friend, at the scene of the recovered plate on Monday.

“I think that there’s a lack of accountability in this city and I think the criminals know it,” said Stefani. “This is organized crime for sure. And the fact that there are often no consequences for these kinds of crimes is one of the reasons why they continue.”

Detectives also found what looked like a fresh orange juice drink container in that stolen car. Stefani said they plan to swab it for any DNA, hoping it may lead to a suspect.