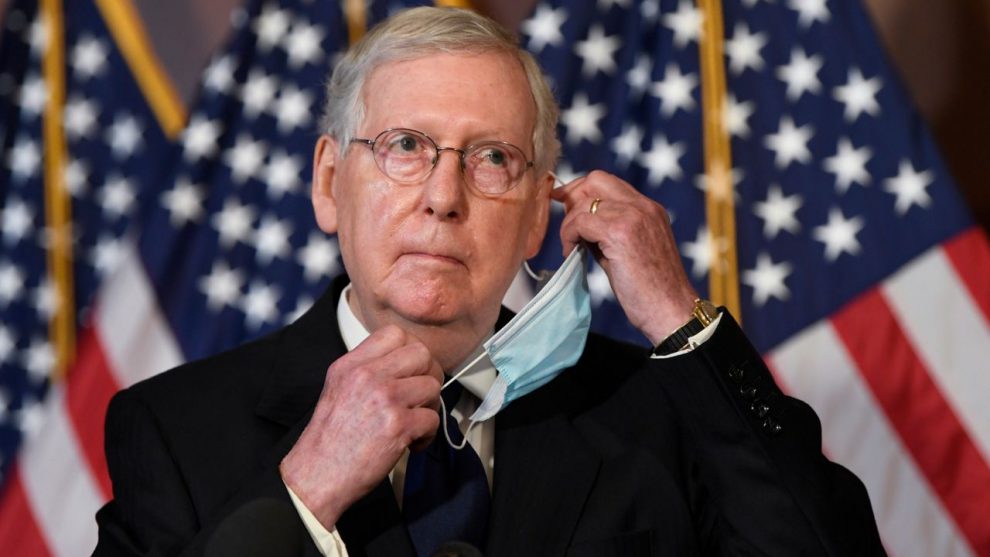 The battle for control of the Senate could go into overtime, pushing the outcome of the months-long fight past beyond election night on Tuesday.

Democrats are within striking distance of securing the majority for the first time since 2014 after putting Republicans on defense in roughly a dozen states. Political handicappers predict the most likely outcome is Democrats winning back the chamber by a small margin.

But lawmakers and officials are warning that the number of close races, the potential for runoffs, and the influx of mail-in and absentee voters mean it could be weeks or months before knowing which party will control the Senate.

“There’s some races out there that are really tight. I suspect, you know, it could go into overtime,” said Sen. John Thune (R-S.D.), the No. 2 Senate Republican.

Senate Majority Leader Mitch McConnell (R-Ky.), during a campaign stop in Kentucky, indicated it would “probably [be] a long night or several days thereafter” before the results are known.

Because the Senate’s margin is likely to be narrow next year regardless of which party is in the majority, having only a few races unknown could keep the larger question about who will control the chamber in flux.

“I don’t think we’re going to know on Tuesday night,” said a Democratic official working on the Senate races. “It’s just going to take a while because of the changes in voting.”

A GOP official added that the amount of tight races is “bad news for folks who want a clean and clear verdict on election night.”

The Cook Political Report’s Jessica Taylor estimates that Democrats will pick up anywhere between two to seven seats, which ranges from a slim Republican majority to a Democratic majority. Republicans control the chamber by a 53-47 margin, meaning Democrats need a net gain of at least three seats and the White House to win control.

Data website FiveThirtyEight estimates that Democrats have an 80 percent chance of starting 2021 with anywhere from 48 to 57 seats. The most likely outcome, according to FiveThirtyEight, is Democrats taking the majority with 52 seats.

McConnell, during an interview with conservative radio host Hugh Hewitt on Friday, called the party’s chances of holding onto the Senate “50-50.”

“We’ve got a whole lot of tough, close, I describe them as like a knife fight in an alley, in about six or eight different places,” he said.

Asked if he thought he would know the outcome of the Senate battle on election night, Sen. Dick Durbin (D-Ill.), the No.2 Senate Democrat, demurred.

“I really couldn’t say one way or another,” Durbin said, noting that run-off elections could take place as late as January.

Officials in both parties agree that two battleground races — Iowa and North Carolina — are more likely to be called quickly, though mail-in ballots for North Carolina have been subjected to several legal challenges already.

Iowa officials have said they “don’t anticipate significant delays in reporting statewide results” and county auditors can start opening absentee ballots on Saturday, instead of the day before the election, under a decision made in September to try to allow more time to process the surge in absentee ballots.

North Carolina Board of Elections officials announced during a recent meeting that they expect roughly 70 to 80 percent of the ballots to be counted once polls close at 7:30 p.m. ET.

But beyond that, officials and handicappers point to a slew of key races that could keep the outcome of the fight for the chamber in limbo.

In Montana, where the 2018 Senate race wasn’t called until the day after the election, Sen. Steve Daines (R) holds a roughly 3 percentage point lead over his Democratic challenger, according to a RealClearPolitics average of polls. In Alaska, where GOP Sen. Dan Sullivan is fighting for a second term, NBC affiliate KTUU reported that thousands of absentee ballots and early voting ballots cast between Oct. 29 and Nov. 3 won’t be counted until Nov. 10.

Meanwhile, Arizona started processing ballots 14 days before the election, instead of seven days ahead like it did in 2018, when it took several days to declare Sen. Kyrsten Sinema (D) the winner. Sen. Martha McSally (R), who lost to Sinema but was later appointed to the state’s other Senate seat, is trying to fend off a strong challenge from Democrat Mark Kelly.

The GOP official noted that Arizona “typically counts more slowly,” meaning the outcome of the Kelly-McSally battle “may not be clear on election night.”

In Maine, officials are expecting the race between GOP Sen. Susan Collins and Democratic nominee Sara Gideon will likely have to go to ranked-choice.

Under Maine’s voting system, voters can rank candidates in order of preference. If no candidate gets a majority, election officials eliminate the lowest-ranked candidate and redirect their supporters based on their second preference. Subsequent rounds continue until a candidate receives a majority.

“That’s been widely anticipated pretty much all cycle,” the GOP official said about the need to go ranked choice.

The Democratic official, who also believed the race would get kicked to subsequent rounds, noted that when a congressional race had to use ranked-choice voting in 2018, it took more than a week for it to be called.

Maine and Arizona are both considered key pieces in the Democratic effort to win back the Senate, all but guaranteeing that uncertainty in those two races will keep the majority from being known quickly.

But the biggest hurdle for both parties will be avoiding a run-off election in both Georgia seats.

Under state law, if neither Sen. David Perdue (R-Ga.) nor Democratic nominee Jon Ossoff hit 50 percent, they will take part in a run-off election. The same rules apply in the other Senate race, where Sen. Kelly Loeffler (R-Ga.) is trying to hold on in a crowded field of candidates.

Any run-off elections would take place on Jan. 5, around the same time the new Congress would normally begin.

“One of those races almost certainly going to go to a run off, the special election, and potentially the other one might too,” said Kyle Kondik, the managing editor of Sabato’s Crystal Ball.

Polling in the Perdue race shows it a statistical dead heat, with neither the GOP incumbent nor Ossoff garnering 50 percent. Polling in the Loeffler race shows Democratic candidate Raphael Warnock in the lead but short of the 50 percent mark. Both races are ranked as a toss-up in the final days.

The GOP official predicted that it was “pretty likely” that both are going to runoffs, quipping: “We’re all spending Christmas in Atlanta together.”