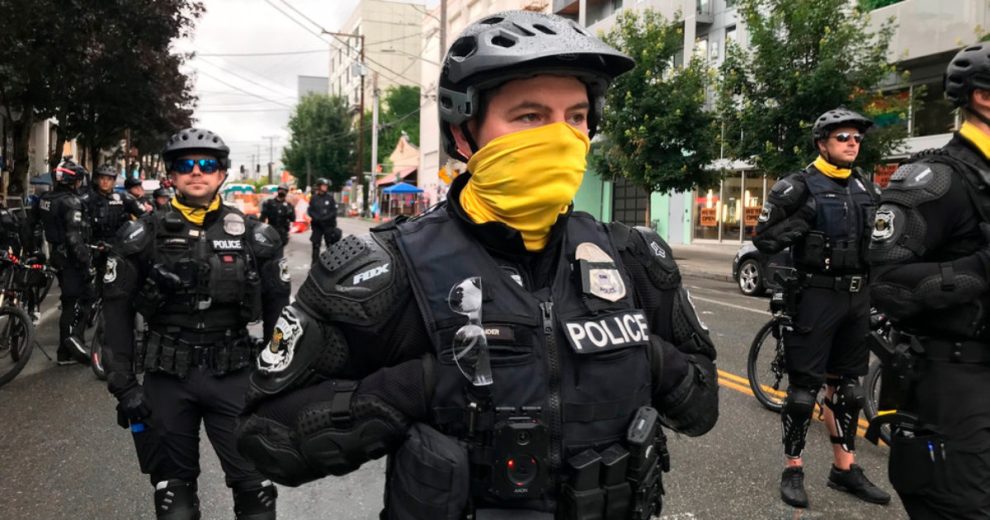 A Seattle man was arrested for reading aloud the Gospel of Saint Matthew in a public park as a “Gay Pride*” event was taking place.

Matthew Meinecke, often referred to as a “street preacher,” was on public property reading aloud from the Bible without the benefit of amplification when he was rousted and then arrested by Seattle’s finest.

SPD has enough resources to send 10 police officers to arrest a preacher reading his Bible in a public park. Because it's such a horrible crime now! pic.twitter.com/pytbNDel9I

Meinecke was also arrested last week for reading his Bible aloud near a pro-Moloch demonstration. I’m not sure what the facts were there, but according to reports, the Seattle city prosecutor does not plan on charging Meinecke for anything. This reveals the true purpose of the arrest was to silence Meinecke so the Gay Pride bunch wouldn’t be upset.

I’m going to return to a theme that I’ve harped on in the past. Too many conservatives have bought into the “back the blue” nonsense in response to the “defund the police” movement and BLM rioting. This is misguided. Police aren’t guarantors of freedom; they are the enforcers of the administrative state. Police unions and cliques of senior police officers are one of the major forces against gun rights. Time and again, you find the police cheerfully enforcing the most shameful regulations. During the “pandemic,” police in (at least) New York and New Jersey broke up funerals and gatherings in private homes. They arrested people in empty parks and on deserted beaches. They arrested people for not wearing masks. Their record on protecting the First Amendment rights of Christians is similarly checkered. Dearborn, Michigan, had to pay a substantial settlement because the police arrested Christian preachers outside the venue of a Muslim street fair. Earlier in “Pride” month, police in Coeur d’Alene threatened to arrest Christian ministers presenting a message counter to the depravity going on (see Coeur d’Alene Police Threaten Preachers With Arrest to Protect Gay Pride Event in City Park). And now we have this.

The police are on the side of the people who write their checks. Period. If you think you can rely upon the police to act as a bulwark for your rights in the face of a hostile government, you deserve whatever misfortune befalls you. If you want to support police departments that treat hooded Antifa thuglets as a privileged class and street preachers as the enemy, you should probably reconsider your political philosophy. We should support law enforcement to the extent that they are keeping our communities safe. Beyond that, we owe them nothing. When they act lawlessly to keep Gay Pride exhibitionists from having their feelings hurt, they have forfeited the right to our support.