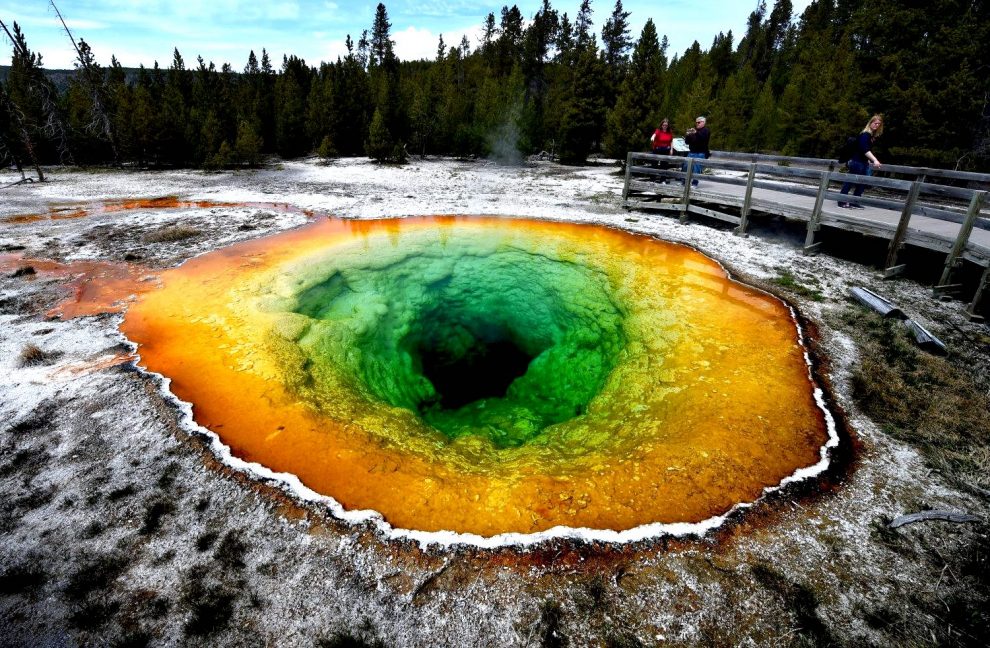 Something odd is going on in Yellowstone National Park. Geysers that would once erupt every half-century are now spouting steam every week.

And, late last year, one slumbering geyser — dubbed Ear Spring — vomited up 80 years worth of trash. The spring’s last big blow was in 1957.

So, when it blew to a height of some 29 feet in September, National Parks officers spent days collecting old coins, beer cans and even a 1930s baby dummy from its surroundings.

“An approximately 8-foot diameter area of surrounding ground is ‘breathing’ — rising and falling by about six inches every 10 minutes,” USGS researchers said.

While the eruption offered up an interesting time capsule, it also represents what researchers are calling an unusual upturn in geyser activity.

The Steamboat geyser used to erupt erratically, sometimes after a duration as short as four days or as long as 50 years. Lately, it’s been sending spouts of steaming water 295 feet high into the air once every week.

However, USGS and park officials have stressed in recent months that there have been no signs of volcanic activity.

“Changes in Yellowstone’s hydrothermal features are common occurrences and do not reflect changes in activity of the Yellowstone volcano,” they said in a statement.

This is because the hydrothermal system — where water pools among the cracks in the rocks of the earth’s surface — is limited to mainly just the top 98 feet or so.

“There has been no significant increase in seismicity nor broadscale variations in ground movement,” the USGS says.

Yet the geysers’ behavior remains erratic.

“As soon as you start to recognize a pattern, it changes.”

The upsurge in activity is happening in the Norris Geyser Basin, which has a reputation for being one of the hottest and most erratic thermal areas within the national park.

“As geysers go, Steamboat is sort of typical in terms of having these sporadic, unpredictable eruptions,” Poland says.

“But because it’s this really tall geyser and it has this name recognition, it makes it that much more interesting.”

Whatever it is that’s causing this increase in activity, it doesn’t seem to have anything directly to do with the supervolcano beneath. Very little has changed in its magma movements.

What has changed has been the amount of snow dumped on the park by “Polar Vortex” events. Recent winters have been particularly snowy, adding extra water to water reservoirs.

Put simply, the subsurface “kettle” is likely starting to overflow.

But, as there is as yet no way to measure these water levels, Poland says: “We’re just speculating.”

See also  Despite Use Of Term 'Birthing Persons' No Data Forthcoming On How Many Trans Men Give Birth
→ What are your thoughts? ←
Scroll down to leave a comment: