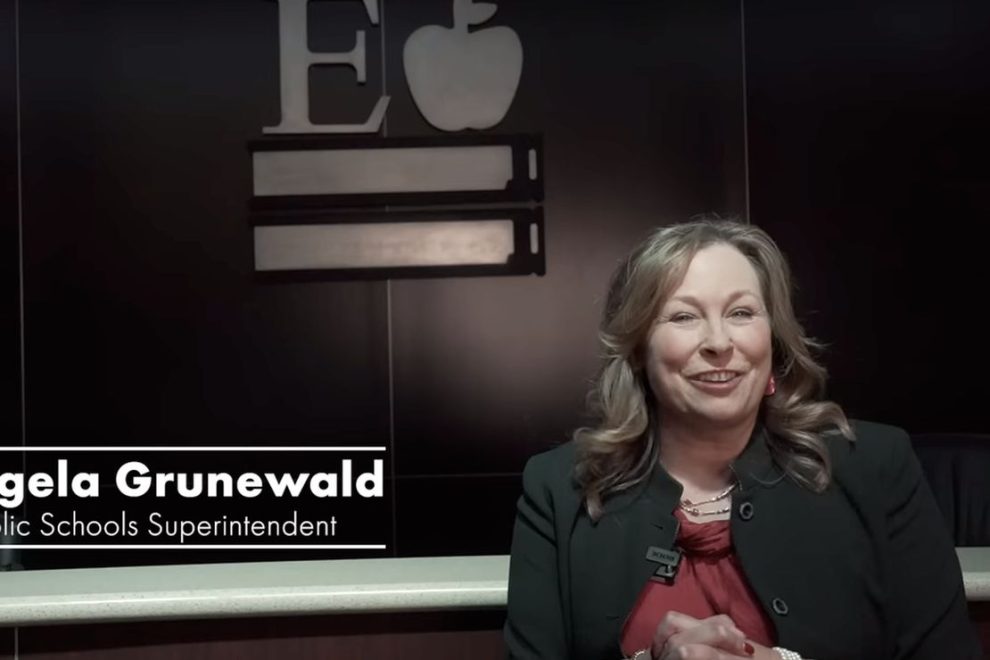 Within 24 hours of PJ Media sending an inquiry to Wendy Suares asking why the male student who beat up two girls in the girls’ bathroom that he was using in violation of state law wasn’t “newsworthy” according to her tweets, Suares had a change of heart. The Fox 25 reporter is now fervently working as the PR arm of Edmond Memorial High School, which got caught covering up the assault of two girls in the bathroom by a boy posing as a girl.

Angela Grunewald, the school’s superintendent, has been under fire for not alerting parents to the attack that happened in October. After the national media reported her failure, she quickly released a video explanation. Suares, ever helpful to prop up the approved narrative, breathlessly tweeted the statement out as if Grunewald had done the right thing by releasing this statement… two months late.

Grunewald can be seen in the video smiling weirdly and shrugging as she tries to downplay the seriousness of the injuries of the victims.

“We’ve been experiencing a calm and peaceful school year,” she opened, unironically sounding like a CNN anchor describing riots as “fiery but mostly peaceful.”

“On October 26 there was a fight at Edmond Memorial High School in the girls’ bathroom that involved a transgender student,” she continued while weirdly shrugging and mugging for the camera with a gleeful look on her face. Grunewald claimed that the male student was new to the school and when he was enrolled he presented as female and his parent enrolled him as a female. Grunewald says the school didn’t know the student’s biological sex.

“Birth certificates are not required to start school,” she went on to explain, still oddly jubilant. “In the fight, there were what would technically be called minor injuries,” she said describing a possible concussion and other head wounds. She quickly followed up with “it doesn’t matter, that’s not okay,” after clearly attempting to downplay the injuries.

Grunewald went on to say that the student was disciplined for breaking the Oklahoma state law for using a bathroom that did not coincide with the biological sex and for fighting. The student is also no longer attending the school, but Grunewald did not specify if he was expelled or removed voluntarily.

“You send your child to us every day,” continued the superintendent, claiming the teachers and administrators “want nothing more than to keep the children safe.” Grunewald then went on to thank the teachers for protecting the children in the school while weirdly seeming to forget that two of them are currently injured because they were unsafe in the bathroom. She did not give any update on the victims and how they are doing.

Oklahoma’s Secretary of Education, Ryan Walters, has launched an investigation into Edmond schools to find out how the assault was not reported to parents and to make sure the schools are following the law. “It has come to light that at Edmond public schools a boy claiming to be a girl went into a bathroom and assaulted two young girls. This will not be tolerated in Oklahoma.” Walters might want to start his investigation by calling Michael Grande, a former school board candidate who has already had to sue the school with a group of parents for civil rights violations.

There are many questions that need to be answered by this school, and chief among them is why they waited until today to alert the parents of their district of this crime. PJ Media spoke to Grande, who ran for the Edmond School Board and he provided us with emails that showed the school had no intention of informing the community of the incident.

Grande sent an email on December 8 to school board member Marcus Jones asking why all the parents were not informed when the incident occurred. Jones responded on December 12.

I have included Dr. Grunewald in this email to give further details on the district guidelines for mass parent notifications. I can say in the Edmond Memorial incident all parties’ parents were notified about the incident. That being said, the District is constantly striving to keep parents informed. As a Board Member I have and will continue to protect, support, and cheer for our EPS students as they matriculate through the schools.

Grunewald then sent a response to Grande on the same day.

Grunewald mentioned another incident where the school had sent out two alerts to all parents regarding an incident that did not happen on school grounds and did not involve student safety. The policy on what gets a district-wide notification seems unclear and possibly unhelpful.

I’m assuming the example you mention at North was from last Friday when the school was placed on lockdown because of police activity in close proximity to the school. We sent out two notifications that day. The first one was sent right as the lockdown was occurring simply stating that the school was going on lock down, all students were safe, and more information would be coming soon. A little after 1:00 the second email went out letting parents know the lock down was over.

The incident that spurred the lockdown was described by the administration in detail. 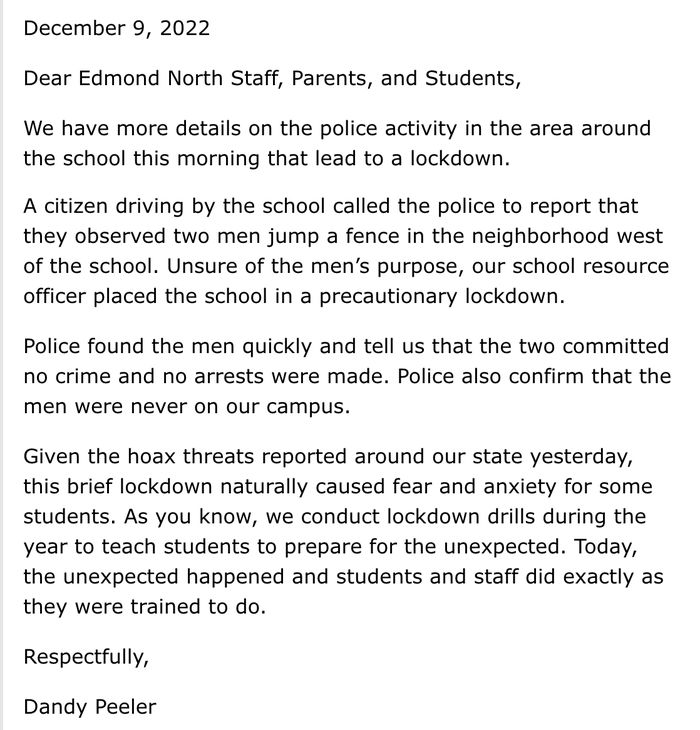 Surely, these school officials know that parents are deeply concerned that girls’ safety is threatened by bathroom policies that allow males access to them. They should have known that a violent assault with echoes of the Loudoun County, Va. scandal would bolster the parents who had come to them with those concerns at previous meetings.

Grande reported that at the August board meeting when the bathroom policy had to be changed due to state law, the school’s human resources director admitted that they’ve “been dealing with these issues for some time,” as he said to the board who looked like they were holding court at the United Nations like foreign heads of state in lavish surroundings and not a suburban school district meeting.

Prior to the governor enacting the law, there was no written policy, but emails show that the school board was allowing students to use any bathroom they wanted.

An Edmond parent emailed board member Lee Ann Kuhlman in March of this year asking about the bathroom policy.

The parent followed up and asked if the district had ever received any complaints about boys in the girls’ bathrooms and received no response. 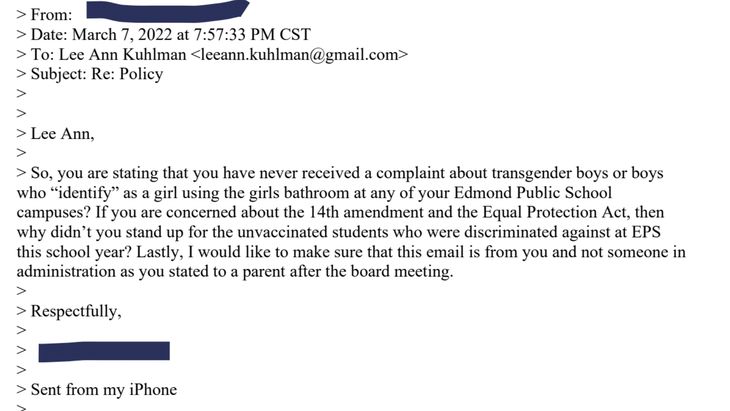