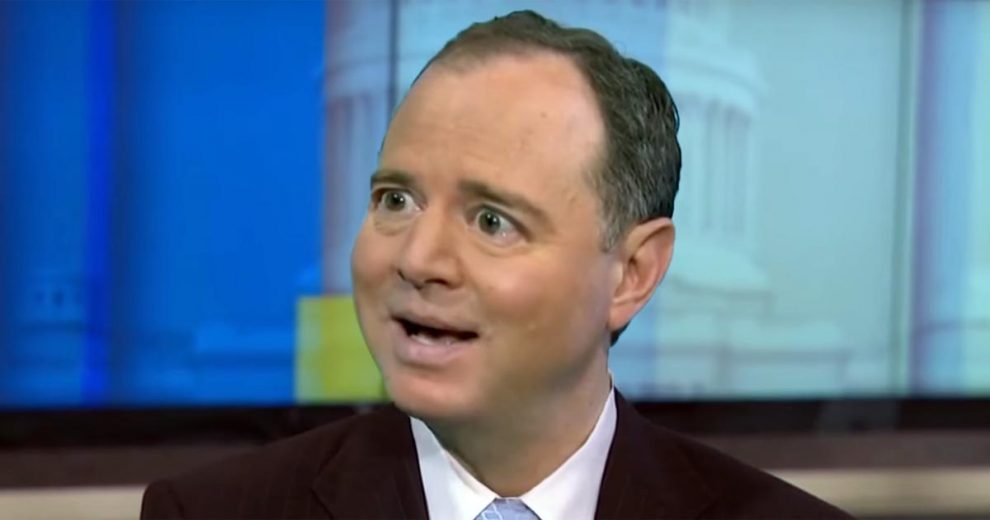 Sunday, defenestrated House Intelligence Committee Chairman Adam Schiff, who bills himself as the “outgoing chairman,” appeared in ABC’s “This Week” with Jonathan Karl. During that appearance, he said that Congress should receive a damage assessment of the stolen documents and he was going to “reserve judgment” on the matter until all the evidence was in. This is a stark departure from how he treated President Trump’s case, where he virtually accused him of high treason before the FBI agents had finished fondling Melania’s underwear (to be clear, she was not wearing them at the time).

Given Schiff’s history of lying and doggedly defending Biden, to see him reduced to taking a wait-and-see position was curious. As I pointed out in my post earlier tonight (Chuck Todd Joins the Media Crowd Losing Their Crap Over Joe Biden’s Pilfered Secret Documents), even the most partisan Democrats are holding back from defending Biden. My colleague Nick Arama covers the sleazy Jamie Raskin squirming like a worm on a fishhook when questioned about the Biden document theft (CNN and ABC Nail Schiff and Raskin on the Biden Classified Documents Scandal).

I don’t believe Schiff doesn’t know the classification of the documents and the subjects. The Intelligence Community has become a Democrat plantation, and it is impossible to imagine a set of facts where Schiff hasn’t been given the inventory of what was found. If the documents were harmless, we’d already know because dragging this scandal out for a week and appointing a Special Counsel to investigate Biden is not something the Democrats want or need right now.

The tepid defense by Schiff and others leads me to believe there is damned little goodwill between Congressional Democrats and Biden and that he’s going to sink or swim on this without their help.

Full Transcript
KARL: All right, let’s get the Democratic response from Congressman Adam Schiff, the outgoing chair of the House Intelligence Committee.

Congressman Schiff, you were on this show just after Attorney General Garland appointed a special counsel in the case of the Trump documents. You said it was the right move. Do you feel the same way about this special counsel?

REP. ADAM SCHIFF, (D-CA): I do think it’s the right move. The attorney general has to make sure that not only is justice evenly applied, but the appearances of justice are also satisfactory to the public. And here, I don’t think he had any choice but to appoint a special counsel. And I think that special counsel will do the proper assessment.

I still would like to see Congress do its own assessment of — and receive an assessment from the intelligence community of whether there was an exposure to others of these documents, whether there was harm to national security, on the case of either set of documents with either president. But, yes, I think the special counsel was appropriately appointed.

Jonathan, if I could also, though, because my state is still trying to dig out from these terrible storms, I want to thank the president for making an emergency declaration and let Californians know that in the three most affected counties they can now apply for help in terms of rebuilding their homes and their businesses and that other counties need to report their damage as soon as possible so they can qualify for relief as well.

KARL: Yes, thank you for that.

Back to the – to the documents.

SCHIFF: I don’t think we can exclude the possibility without knowing more of the facts. We have asked for an assessment in the intelligence community of the Mar-a-Lago documents. I think we ought to get that same assessment of the documents found in the – in the think tank, as well as the home of President Biden. I’d like to know what these documents were. I’d like to know what the IC’s assessment is, whether there was any risk of exposure and what the harm would be and whether any mitigation needs to be done. I think that would be appropriate and consistent with what we requested in the case of Mar-a-Lago.

KARL: The White House knew about this on November 2nd. So that was almost a full week before the midterm elections. We didn’t learn about it — the public wasn’t informed until this week and it was only after the story was, you know, was out there, reporters were asking questions.

Should they have been more forthcoming? Should this information have been revealed earlier?

SCHIFF: I think the administration will need to answer that question. I’m going to reserve judgment until they do. But I think it’s important to point out that the Biden approach was very different in the sense that it looks, as far as we can tell, that it was inadvertent that these documents were in these locations. When they were discovered, they were immediately provided to The Archives or to the Justice Department. There was no effort to hold on to them, no effort to conceal them, no effort to obstruct the Justice Department’s investigation. All of that is a very sharp contrast to Donald Trump’s handling of the situation.

So, as you point out, this is a very different matter. But, nonetheless, I think it’s appropriate for special counsel to look into both situations.

KARL: Republicans are saying they are going to investigate — House Republican, the Oversight Committee chairman. Comer gave — sent a letter to the White House Counsel making a very specific list of requests. He wants to know what the documents were, they want internal communications between the Biden White House and the Penn Center where the documents were first found, a list of all people would worked there that would who would have potentially handled these documents and a few other requests. They seem, on the face of it, to be reasonable requests. Should the White House cooperate with the House Oversight Committee on this?

SCHIFF: Well, those requests are completely hypocritical when you consider what he said about the Mar-a-Lago situation. I think Congress ought to handle both situations the same way, and that is we ought to get a briefing from the intelligence community about any potential risks to national security of where those documents were and what they contained. But Congress shouldn’t try to interfere with the investigations. I think, sadly, that’s what Mr. Comer’s object is. He showed no interest in investigating the far more serious situation with about 100 classified documents at Mar-a-Lago with evidence in the public domain of obstruction. Now he is suddenly interested in investigating President Biden.

I think Congress needs to be consistent here and take the same approach. I don’t think we ought to be doing things that are willy intended to interfere with the Justice Department’s work.

KARL: So you don’t think the White House should cooperate with the – the committee on this? I mean you fought mightily –

KARL: And then they, for the most part, did not. But you don’t —

SCHIFF: I never said the White House shouldn’t cooperate. What I said was Congress ought to ask consistently, and we shouldn’t try willfully to interfere with what the Justice Department is doing. That’s what I think Mr. Comer is intending.

But, yes, I think the Biden administration ought to cooperate with any appropriate inquiry from Congress.

KARL: You’ve endorsed President Biden’s re-election. He hasn’t announced yet, but we expect he will. Does any of this complicate his efforts to — to mount a re-election campaign and make a stark contrast with Donald Trump?

SCHIFF: I think there are so many stark contrasts with Donald Trump, on policy, on decency, on a devotion to the truth, on his handling of foreign policy, on his domestic policy priorities, on his accomplishments in attacking climate change, in getting a bipartisan infrastructure bill done when Trump talked about it for four years but did nothing, when Trump misused millions, hundreds of millions of dollars in aid meant for an ally at war, Ukraine, to try to extort that country into helping his campaign; in contrast, Joe Biden helping Ukraine fight against a Russian invasion of their lands.

So there are lots of sharp contrasts for Joe Biden in the next election.

KARL: All right, Congressman Schiff, thank you for joining us.