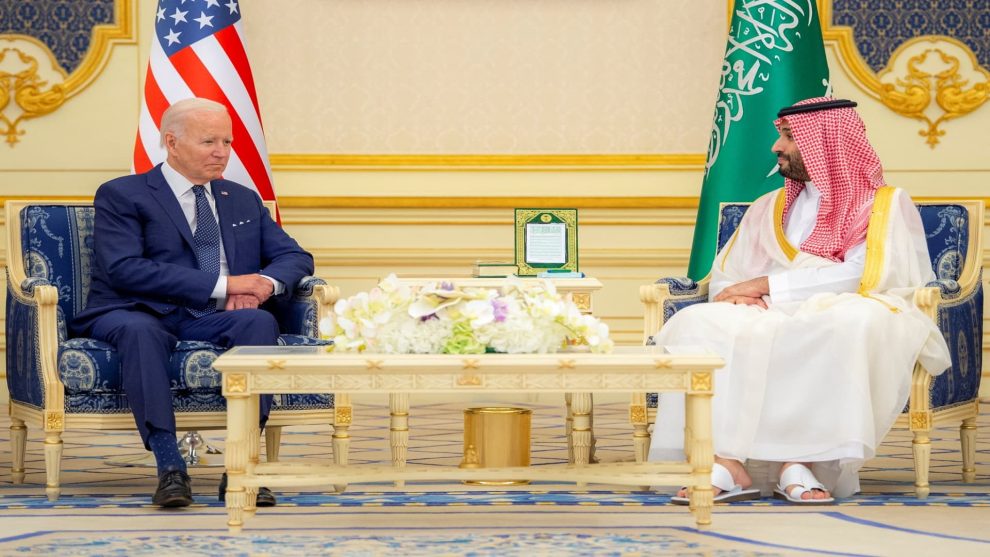 Joe Biden’s recent trip to the Middle East made many headlines, and none of them were particularly good. The president first landed in Israel where he promptly insulted Holocaust victims. At several other points during the week, he looked physically and mentally frail, appearing aloof and out of it. Then there was Biden’s stopover in Saudi Arabia, which led to a now-infamous fist bump that set teeth gnashing because the left hate the Saudis.

But the topline from the president’s tour was simple: It accomplished nothing. While the White House tried to hint that a deal for increased production had been reached, there was never any evidence offered. The reason why became clear on Wednesday after the Saudis stabbed Biden directly in the front as part of a big announcement from OPEC Plus.

The increase (the 2nd smallest hike in the cartel's history, only behind one in 1986) comes despite President Biden's trip to Saudi Arabia | #OOTT 1/4 https://t.co/3KO9hcdQU0

Saudi Arabia is one of the original founders of OPEC, and they wield heavy influence over the OPEC and OPEC Plus nations. The entire point of Biden’s trip to the kingdom was to secure Saudi support for a large increase in production to help offset the global oil supply crunch that has driven up prices. Instead of getting a production boost of around half a million barrels a day, the president ended up with just 100,000, a massive reduction compared to the expectation. For context, the United States uses about 21 million barrels of oil a day, making a global increase of 100,000 a day nothing but a rounding error.

The situation gets dimmer, though. Apparently, that “increase” doesn’t even amount to any real increase.

The OPEC+ increase isn't real, either, as most member are already pumping at their maximum capacity. Only Saudi Arabia and the UAE can increase. If they adhere to their quotas, the 100,000 b/d translates in an extra 26,000 b/d for Riyadh and 8,000 b/d for Abu Dhabi | #OOTT 3/4

That is what total failure looks like. The President of the United States went to the Middle East to beg a country he had previously tried to make a “pariah” for oil. Why? Because Biden’s own domestic energy policies have been so disastrous. The president then returned with no actual agreement, choosing bluster over substance. Now, the results of that are in, and the Saudis aren’t even pretending to have played along. It’s yet another embarrassment for Biden and the nation.

This is the danger of having the world’s worst foreign policy “expert” in the White House. Biden has famously been wrong on every major geopolitical issue for the last half-century, and you can add his plan to punish the Saudis while elevating Iran to the list. It didn’t have to be this way. Trump left an improving Middle East on the table, with the Arab nations and Israel moving toward a historic peace. All Biden had to do was eat his ice cream, keep the status quo rolling, and reap the benefits for everyone.

He just couldn’t do it, though. Instead, the president stuck his finger in the eye of the Saudis, causing them to cease their long-standing cooperation, harming American consumers along the way. And for what? To pursue some pointless nuclear deal with Iran? This is who Biden is. He’s a man always in search of failure, and he can turn any good into bad.