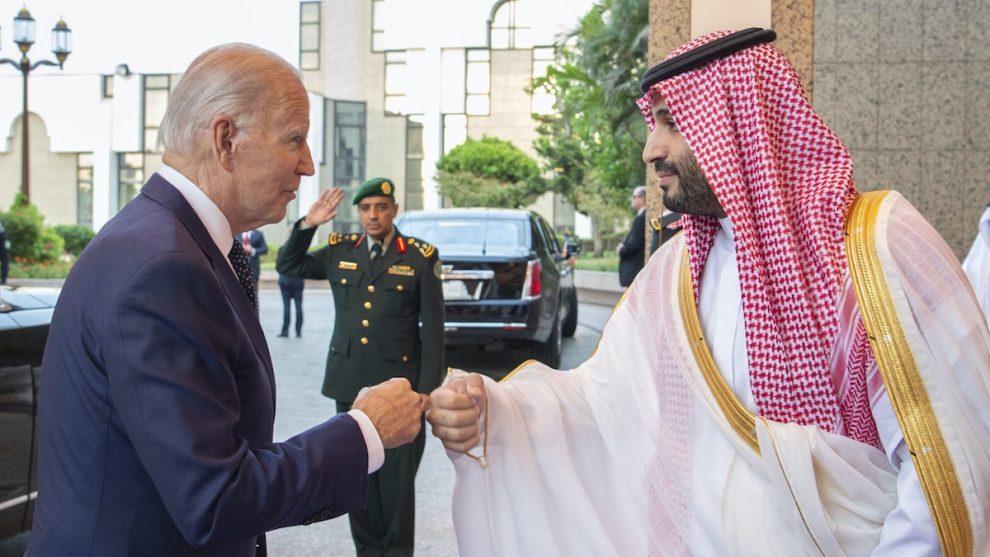 Saudi Arabia helped Russia push for higher worldwide oil prices on Wednesday alongside other members of the Organization of Petroleum Exporting Countries (OPEC).

The alliance announced that member states would cut oil output by 2 million barrels per day beginning in November, constituting 2% of global oil demand. Russian fuel is currently trading worldwide at a discount as European consumers refrain from purchasing the nation’s fuel.

Brent crude prices surged to $139 per barrel earlier this year after Russia invaded Ukraine, although prices had since declined to roughly $84 per barrel before spiking this week to roughly $93 per barrel. New output restrictions could provoke the United States to release more oil from the Strategic Petroleum Reserves, which are presently at their lowest levels in four decades.

With member states such as Iran, Saudi Arabia, Venezuela, Kuwait, and Iraq, OPEC sets petroleum output targets in a bid to control worldwide energy prices. The bloc accounts for more than 80% of the world’s proven oil reserves, with 67% coming from Middle Eastern members. Russia has coordinated oil output with OPEC since 2016.

The news comes as relations between the United States and Saudi Arabia, long considered a key economic ally in the Middle East, are strained due to President Joe Biden calling the nation a “pariah” during the 2020 election cycle — an accusation that stems from the 2018 murder of Washington Post journalist Jamal Khashoggi, who had been critical of Saudi rulers.

During a visit to the Islamic kingdom three months ago, Biden touted the need to “ensure adequate supplies” of energy “to meet global needs.” Though he did not specifically mention oil, many have speculated that encouraging higher output in response to elevated gas prices in the United States was a primary factor behind Biden’s visit.

Sen. Chris Murphy (D-CT) said on Wednesday that the plan from OPEC to cut petroleum output proves that the United States should consider a “wholesale reevaluation” of its alliance with Saudi Arabia. “I just don’t know what the point of the current alliance is, if we have to work so hard to get the Saudis to do the right thing,” he argued during an interview with CNBC.

The national average price of gasoline in the United States was $2.38 per gallon when Biden assumed office and increased to $3.53 per gallon by the start of the invasion of Ukraine. After surpassing $5.00 per gallon in early June, prices have somewhat subsided to $3.83 per gallon as of Wednesday, according to data from AAA. However, gas prices in Los Angeles County, California, reached an all-time high on Monday as the cost for a gallon of regular fuel hit $6.47.

Other Democratic officials have contended that the high fuel costs should provoke a transition toward renewable energy. Treasury Secretary Janet Yellen said during a speech last month that the Inflation Reduction Act, which was recently passed into law, contains reforms that will prevent American reliance on foreign oil.

“Over the past two years in particular, we’ve seen the direct consequences of our continued dependence on fossil fuels. Not only do we continue to contribute and subject ourselves to a rapidly warming climate,” Yellen remarked, “but we expose ourselves to the type of energy market volatility we’ve experienced in the wake of Russia’s brutal war on Ukraine. No country controls the wind and the sun. And countries that can harness those sources of energy will make their economies more resilient and secure.”