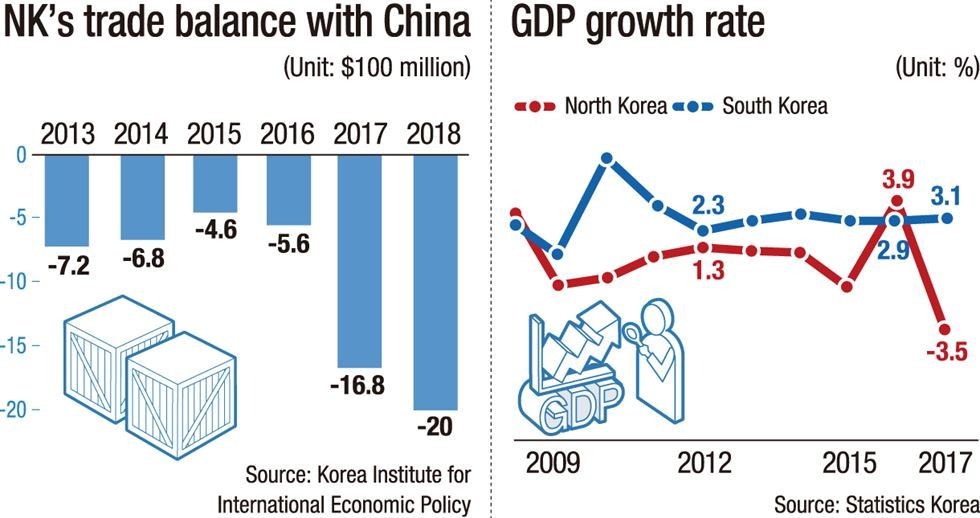 International sanctions have pushed North Korea to the edge of economic collapse, with its trade deficit with China hitting a record high due to a plunge in exports and imports, according to analysts.

They said Pyongyang’s failed yet consistent demands during the second U.S.-North Korea summit that sanctions be partially lifted is a strong indication of how dire its economic situation is.

The view came after the Feb. 27 summit was cut short as neither side was willing to compromise. The North demanded some sanctions be lifted first and foremost prior to denuclearization, while the U.S. said the reclusive regime should take more concrete steps toward nuclear disarmament.

“Looking at China’s January trade data, it is clear that North Korea’s exports remain at rock bottom and that imports also are very weak and probably falling, as North Korea doesn’t have the hard cash to buy anything of an investment nature,” William Brown, adjunct professor at Georgetown School of Foreign Service, told The Korea Times.

“Some consumer goods continue to flow in, almost normally, but there are almost no imports of any kind of machinery, or trucks or tractors for that matter. Without these kinds of imports, little investment can take place and the economy will continue to falter.”

See also  Nancy Pelosi Lands in Taiwan, Defies Biden Administration and China
→ What are your thoughts? ←
Scroll down to leave a comment: