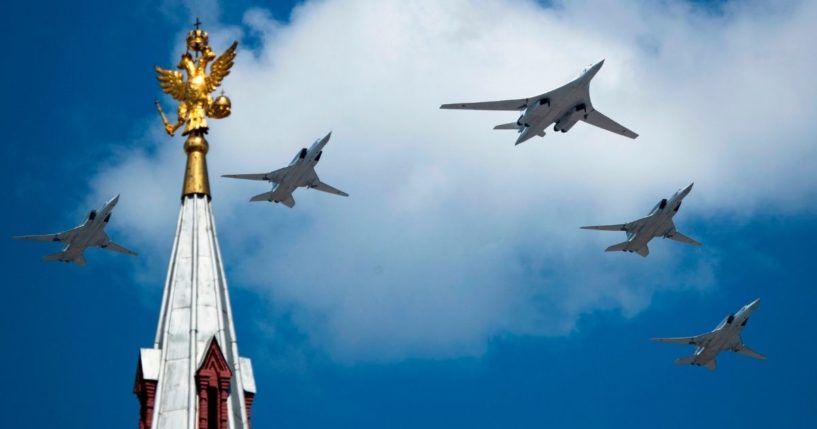 According to the report, the Russian Ministry of Defence made the announcement on Thursday. The Tu-22M3s, currently located in Saratov, Russia, will be escorted by “MiG-29 fighter jets from the Uzbek air force during the drills.”

It’s not clear if these drills were planned before the U.S. pullout or afterward, but Russia’s interest in training on Afghanistan-like terrain signals potential future involvement in the country.

The Biden administration’s hasty and poorly planned pullout from Afghanistan left the Afghan National Army without the safety net of the U.S. arsenal — something top leaders surely did not expect to happen so suddenly. This allowed the Taliban to quickly regain a shocking amount of territory.

In a sign that Biden officials expect the U.S. embassy in Kabul to be taken over by the Taliban, staff has reportedly been ordered to start destroying sensitive material.

US embassy staff in Kabul told to start destroying sensitive material, underscoring Biden admin is preparing for possibility embassy will be overrun by Taliban despite public assurances thr bldg remains in operation. Story by me, @nwadhams @josh_wingrovehttps://t.co/I3pdNo4Pcw

As the security situation in the war-torn country worsens, comparisons to the 1975 Fall of Saigon from Americans across the political spectrum abound.

Speaking with MSNBC on Friday, Medal of Honor recipient Col. Jack Jacobs said, “It looks just like Vietnam in 1975.” He added, “And what the administration is really hoping to avoid is a reprise of 1979, when in Iran, our people in the embassy were captured and incarcerated for 444 days.”

Colonel Jack Jacobs and @DefenseBaron discuss the situation on the ground in Afghanistan as the Taliban gains control of provincial capitals and major cities.

Senate Minority Leader Mitch McConnell issued a statement on Thursday which read in part, “Afghanistan is careening toward a massive, predictable, and preventable disaster. And the Administration’s surreal efforts to defend President [Joe] Biden’s reckless policy are frankly humiliating.”

“Unless President Biden adjusts course quickly, the Taliban is on track to secure a significant military victory. The latest news of a further drawdown at our Embassy and a hasty deployment of military forces seem like preparations for the fall of Kabul. President Biden’s decisions have us hurtling toward an even worse sequel to the humiliating fall of Saigon in 1975.”

McConnell urged Biden to “immediately commit to providing more support to Afghan forces, starting with close air support beyond August 31st. Without it, al Qaeda and the Taliban may celebrate the 20th anniversary of the September 11 attacks by burning down our Embassy in Kabul.”

“The Biden Administration has reduced U.S. officials to pleading with Islamic extremists to spare our Embassy as they prepare to overrun Kabul. Absurdly, naively, our government is arguing that bloodshed might hurt the Taliban’s international reputation, as if radical terrorists are anxious about their P.R.”

He’s not wrong, as the tweets below indicate.

The Biden administration is literally offering to pay the Taliban to spare its embassy. Think of how China and Russia are evaluating this pathetic display of weakness pic.twitter.com/39f6EargUG

Psaki: "The Taliban also has to make an assessment about what they want their role to be in the international community."

Um, I'm pretty sure they decided long ago they were comfortable with "terrorist organization." #Afghanistan pic.twitter.com/v8Ta8WDnnP

The American Free News Network’s Bill Crews has provided some especially good analysis about our 20 years in Afghanistan.

His headline started the story off with the following premise: “If Joe Biden Wanted to Create a Disaster in Afghanistan This Is How He Would’ve Gone About It.”

U.S. objectives were never clearly defined from the beginning, Crews argued. “No one could ever describe what a ‘win’ looked like in Afghanistan.”

He considered a remark made by then-Secretary of Defense Donald Rumsfeld at a mid-October 2001 Pentagon news conference.

“Well, for one thing, we’re finding that some of the targets we hit need to be re-hit. Second, we’re not running out of targets. Afghanistan is,” the defense secretary said. This comment was followed by laughter from the reporters.

Crews wrote that Rumsfeld “tacitly admitted that there were no valid targets left to strike in Afghanistan.” The article author concluded, “If we’ve destroyed every target in the country, isn’t our objective pretty much accomplished, that is, if President Bush’s speech on attacking Afghanistan accurately reflected our real objectives.”

Crews’ analysis provides some interesting insight into what the U.S. was actually doing over there and looks at the Biden administration’s curious decision to leave “smack in the middle of the fighting season.”

What lies ahead for Afghanistan is hard to predict. After the Russians’ decade-long adventure in the country throughout the 1980s, which ended in failure, why are they bringing bombers and forces to the Afghan border? What role will China play? Iran?

Afghanistan has vexed would-be invaders forever from Alexander the Great to the British Empire, the Soviets and the United States.

Patrick Porter, a defense studies lecturer at Kings College London, explained to CNN why “it’s a hard place to fight, to conquer and rule.”

“The geography is very hard: It is a country of mountains and deserts, of quite severe winters and that makes it difficult not only to fight in, but also to operate logistically. It limits your mobility and it is difficult to project power.”

“It is possible in wars against guerrillas to flood cities with troops. It is much harder to flood mountains. And Afghanistan is a country not of very powerful cities but of thousands of isolated villages cut off in severe winters, allowing guerrillas and insurgents to melt away and return,” he added.

Perhaps the primary reason, according Business Insider’s Blake Stilwell, is that an “invader has to completely subdue the population. The whole population.” There are so many ethnic groups inside the country and they are spread out over such a large area, which brings us back to Porter’s discussion about the climate and the terrain.

An invader would also have to be cognizant of individual group loyalties.

“Put aside Taliban or Mujaheddin loyalty for a moment and imagine the life of a regular Afghan man,” Stilwell wrote. “Their clan, their tribe, their unit, their sheikh, their ethnicity, their religion, maybe their provincial or central government? And when you do take into account their loyalties to extremist groups, you have to factor in the group, that unit, and the shadow government.

“That’s 12 potential loyalties right there. Imagine trying to subdue 34 million of them, because you have to if you invade Afghanistan.”

It’s impossible to know what the Russians have in mind. They clearly have some interest in the post-U.S. Afghanistan or they wouldn’t move four Tu-22M3 supersonic strategic bombers and the accompanying MiG-29 fighter jets.