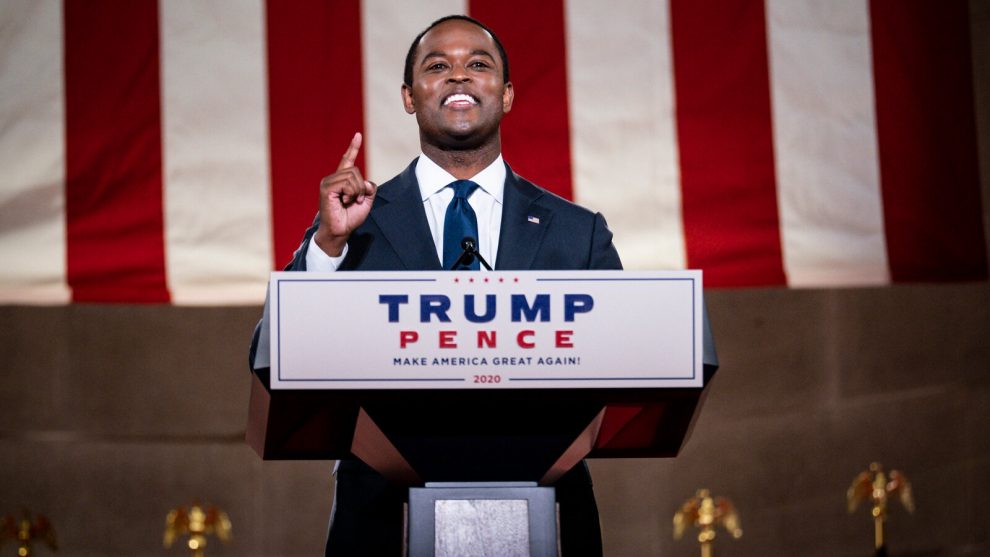 The 2020 Republican National Convention (RNC) this week featured a notable amount of diversity in its speaker lineup that included nearly two dozen Black, Hispanic, Asian, and even handicapped speakers.

The speakers delivered heartfelt speeches about their own personal struggles, how they became Republican, or how they have benefitted under the Trump administration.

One of the most memorable speeches from the first night of the RNC was from Sen. Tim Scott, a Republican senator of South Carolina, who said he went from flunking four subjects in high school to realizing that education was the closest thing to “magic.”

“Our family went from cotton to Congress in one lifetime,” he said.

“Our family went from cotton to Congress in one lifetime.” – @SenatorTimScott

Another memorable speech the first night was from Kimberly Klacik, a young female U.S. House of Representative candidate for Maryland’s 7th district.

Kim Klacik, a Republican running for Congress in Maryland, said at the RNC: "Democrats still assume that Black people will vote for them, no matter how much they let us down and take us for granted. Nope. We’re sick of it and not going to take it anymore.” https://t.co/ErrkmutHCn pic.twitter.com/U9G2cZj9AD

Rep. Vernon Jones (D-GA), a Georgia state representative, also delivered a fiery speech on the first night, saying the Democrat Party does not “want black people to leave the mental plantation they’ve had us on for decades.”

The first night also featured Herschel Walker, the famous athlete and businessman and longtime friend of Trump. “Growing up in the deep south, I have seen racism up close. I know what it is. And it isn’t Donald Trump,” he said.

Herschel Walker: "Growing up in the deep south, I have seen racism up close. I know what it is. And it isn’t Donald Trump."#BlackVoicesForTrump pic.twitter.com/POac1cSdl4

Cuban immigrant Máximo Álvarez delivered a powerful speech about his own experience fleeing communism, choking up at the end.

“When I watch the news in Seattle and Chicago and Portland, when I see history being rewritten, when I hear the promises—I hear echoes of a former life I never wanted to hear again. I see shadows I thought I had outrun.” #LatinosForTrump https://t.co/Lpu9BKqrai

Former United Nations Ambassador and governor of South Carolina Nikki Haley also spoke about her Indian heritage. “In much of the Democratic Party, it’s now fashionable to say that America is racist. That is a lie. America is not a racist country. This is personal for me. I’m the proud daughter of Indian immigrants.”

“My father wore a turban. My mother wore a sari. I was a brown girl in a black & white world.
My mom built a successful business. My dad taught 30 years at a historically black college. And the people of SC chose me as their first minority and first female governor.” @NikkiHaley pic.twitter.com/rB06pzXn6R

Kimberly Guilfoyle, a senior adviser to the Trump campaign, celebrated her Puerto Rican heritage: “My mother Mercedes was a special education teacher from Aguadilla, Puerto Rico. My father, also an immigrant, came to this nation in pursuit of the American dream. Now I consider it my duty to fight and protect that dream.”

“Mr. Vice president, look at me, I am black. We are not all the same, sir. I am not in chains. My mind is my own. And you can’t tell me how to vote because of the color of my skin,” he said.

"Mr. Vice president, look at me, I am black. We are not all the same, sir. I am not in chains. My mind is my own. And you can't tell me how to vote because of the color of my skin." – @DanielCameronAG #RNC2020 pic.twitter.com/5WbgI9PddG

The second night also featured Founder and CEO of HOPE for Prisoners, Inc. Jon Ponder, who was surprised by a pardon from Trump. It also featured Native American Vice President of the Navajo Nation Myron Lizer.

The third night also featured two handicapped speakers. One was a blind Chinese dissident also spoke on the third night — Chen Guangchen, who fled China in 2012. He fought forced abortions under China’s one-child-policy, and praised Trump’s aggressive approach on China.

The other was 25-year-old Madison Cawthorne, candidate for North Carolina’s 11th congressional district, who is paralyzed and in a wheelchair after a car accident. Cawthorne thrilled viewers at the end of his speech by using a walker to stand up.

Also featured was Trump’s former Ambassador to Germany and acting Director of National Intelligence Richard Grenell, who was the first openly gay cabinet secretary in history

Johnson delivered a speech touting Trump’s signing of the First Step Act into law. “It was real justice reform,” she said.

There were also other ways the RNC highlighted its diversity, such as through videos featuring Guatemalan-American Catalina Lauf, a former candidate for the U.S. House of Representatives, and her sister, Madeline Lauf.

We are so proud of Guatemalan American sisters Catalina and Madeline Lauf who spoke at last night's #RNC2020. Their story is the American Dream! 🇬🇹🇺🇸 pic.twitter.com/rvxSIwog4c

The diversity was noted by a number of news outlets. Some mainstream news media journalists and pundits mocked the inclusion of black speakers.

CNN Senior Political Reporter Nia-Malika Henderson, herself black, said they “had to testify and be Donald Trump’s black friend, tonight, and throughout, I think, this whole convention.”

“Almost all of the black people had to testify and be Donald Trump’s black friend, tonight, and throughout, I think, this whole convention. And we’ll see what that does for white moderates, what it does for African Americans too,” she said.

New York Times columnist Charles M. Blow wrote: “These Black and brown people at the Republican convention know this, but they have a job to do: the erasure of racism, the clouding of it so that one may [reason] it away.”

And CNN analyst Brandon Tensley wrote: “There might be people of color at the Republican National Convention. But that doesn’t mean that the event is really about them or their experiences.”

But conservative journalists and pundits applauded the effort to broaden the Republican base and appeal to minority voters.

The New York Post‘s Michael Goodwin wrote: “Black power has arrived. For the first time in modern memory, both of America’s major political parties are making an all-out push for the votes of African Americans. Good for them, and good for our country.”

Throughout his presidency, Democrats have attacked Trump as a racist and have falsely accused him of calling white supremacists “very fine people,” when in fact he explicitly condemned them.

But Trump has often touted his record in reducing unemployment among minorities, COVID-19, steps he has taken on criminal justice reform, and funding of historically black colleges and universities.

A recent Zogby poll showed that his message is being heard. Trump’s approval rating hit a new high of 52 percent, buoyed by black and independent voters, according to the Washington Examiner‘s Paul Bedard.

Zogby said 36 percent of blacks approve of the president, as do 37 percent of Hispanics and 35 percent of Asians.

Trump has been making the case that he has done more for African American voters, by way of prison reform and previously low black unemployment, than Kamala Harris and Joe Biden, both of whom have been accused by the president for increasing incarceration among African Americans for generations on nonviolent drug charges.

On Friday, Trump announced a surprise pardon of Johnson.

Also on Friday, members of Congress announced that the Trump administration would approve a posthumous Medal of Honor for Sergeant First Class Alwyn Cashe, the first Black veteran to receive the award for the post-9/11 wars.

While serving in Iraq in 2005, Cashe sacrificed his life to rescue his soldiers from a burning vehicle after it hit an improvised bomb.