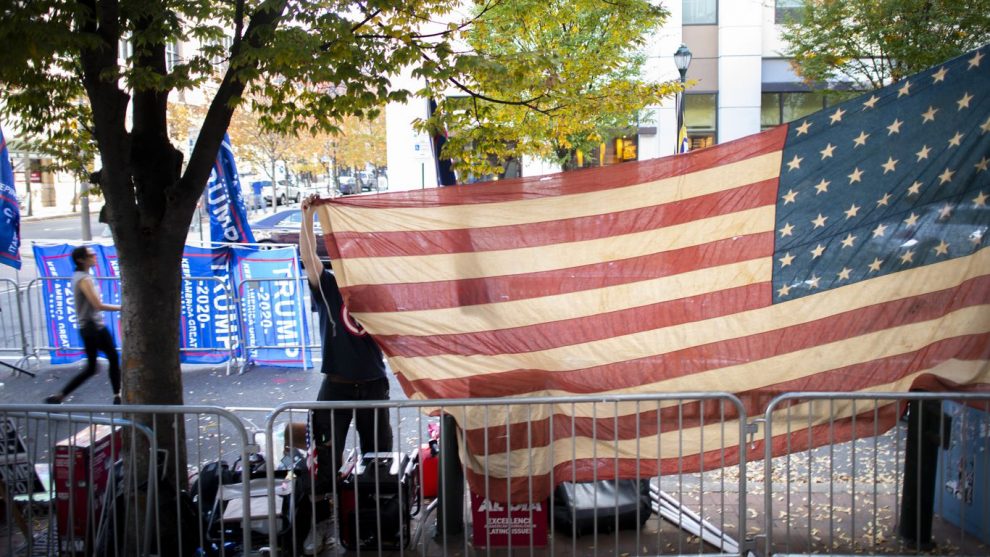 Republicans are creating “alternate” slates of electoral votes in contested battleground states in the event of a challenge of the presidential election results on the House floor — a move President Trump’s senior advisor Jason Miller previewed on Monday.

Electors across the country are meeting in their respective states to formally cast their votes for the 2020 presidential election, as is Constitutionally required. While there is nothing in the Constitution requiring electors, which are typically comprised of prominent party officials, of voting with the will of their state, they normally do. Certain states have laws to ensure that this practice stands. Faithless electors have never altered the state of a presidential election in all of American history.

However, President Trump has vowed to fight, citing various instances of malfeasance at the hands of Democrats as surveys show a majority of Trump voters agree that the opposition essentially “stole” the election from the president via illegal voting and fraud.

With the Supreme Court tossing Texas’s case against Pennsylvania, Georgia, Wisconsin, and Michigan — a case Trump once referred to as “the big one — his GOP allies are continuing to extend the fight, casting an alternate slate of electoral votes — creating “dueling slates of electors” — in the event of a viable challenge in Congress — which is needed for such a challenge.

Miller explained the tactic of selecting an “alternate slate of electors,” during a Monday appearance on Fox News.

“This would ensure that all of our legal remedies remain open,” he stated.

This occurred in Michigan on Monday, where Republican electors attempted to deliver their votes to the Senate but were reportedly turned away. According to U.S. News, “Trump loyalists in Pennsylvania met in Harrisburg and cast what they described as a ‘conditional vote’ for Trump.” An “alternate Republican slate” also cast ceremonial votes for President Trump in Georgia on Monday. Republicans in Wisconsin, another contested state, reportedly made a similar move.

Andrew Hitt, Chairman of the Wisconsin Republican Party, said in a statement that their electors met “to preserve our role in the electoral process while the final outcome is still pending in the courts”:

.@wisgop chair @AndrewHittGOP: "While President Trump’s campaign continues to pursue legal options for WI, Republican electors met today in accordance with statutory guidelines to preserve our role in the electoral process with the final outcome still pending in the courts."

“If the Trump campaign won additional court cases in the contested states, Miller stated, the alternate set of electors could be certified,” as Breitbart News reported.

Brookings also detailed these possibilities in an October explainer, writing, “As a further twist, state legislatures in battleground states might try to replace state-certified electors with alternative slates of faithless-elector equivalents.”

Reuters also detailed the possibility of dueling slates of electors in an October piece:

Both chambers of Congress could accept the same slate of electors, which would almost certainly put the matter to rest.

The chambers could also split, which is more likely if the Republicans retain control of the Senate and Democrats hold onto their House majority.

If lawmakers cannot agree on a set of electors, the country will find itself in uncharted territory.

States will send their votes to the Senate by December 23, and Congress will count the votes on January 6. Per Brookings, “battles over competing slates of electors would play out during the tally could depend in part on which party controls the newly seated House and Senate,” as a “divided government could produce challenges to Pence’s decisions as to which competing slates of electors to accept.”

This is not the first time in history that the U.S. has grappled with the concept of an alternate slate of electors.

“In 1876, dueling electors in three states were deadlocked until a deal was brokered days before Inauguration Day,” Reuters reported.

Even as electors across the nation cast their votes on Monday, President Trump has vowed to fight on.