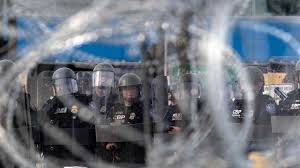 A group of Central American migrants tried to rush one of the international ports of entry from Nuevo Laredo, Mexico, into Laredo, Texas. The move forced U.S. authorities to shut down the gateway. The incident took place at Port of Entry #1 in Nuevo Laredo when a group of about 30 walked to the international bridge and jumped into the vehicle lane in an apparent attempt to cross into Texas and request asylum. 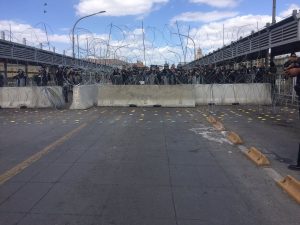 According to Mexican journalists on the ground, the move was met with a show of force from U.S. Customs and Border Protection officers who blockaded the bridge and stopped all traffic until the migrants turned around. About two hours later, authorities allowed pedestrians with travel documents into Texas, while migrants were asked to leave the area.

The migrants are believed to be Hondurans from the various caravans who still have not been able to request asylum in the U.S. The recent push in Nuevo Laredo comes days after authorities closed a migrant shelter in Piedras Negras that housed approximately 2,000 at its peak.

Laredo is one of the least secure cities on the southwest border and is the main smuggling corridor for the Cartel Del Noreste faction of Los Zetas. Most of the region lacks man-made barriers, leaving only the shallow waters of the Rio Grande as the obstacle to enter Texas between ports of entry.