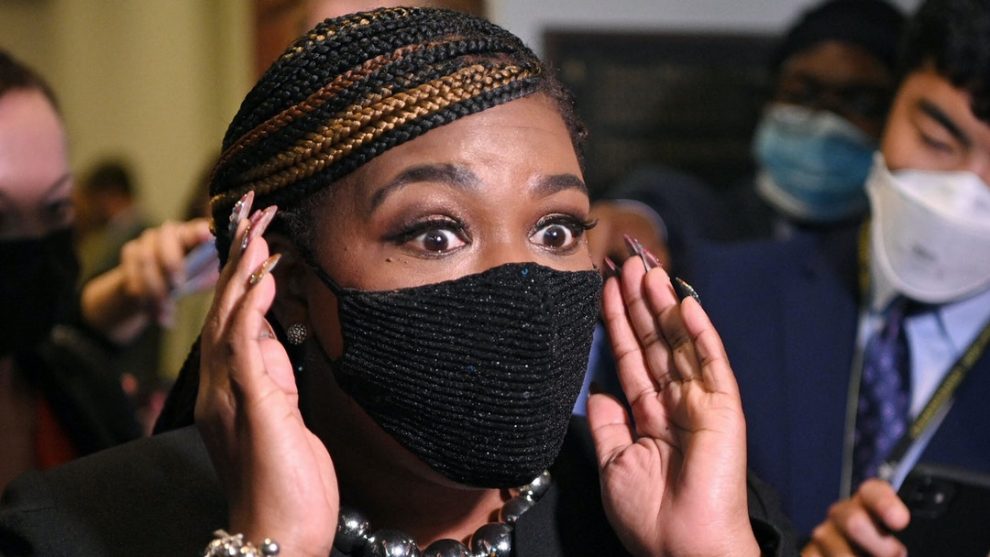 Rep. Cori Bush (D-MO) slandered Republicans on the House Oversight and Reform Committee during a Wednesday hearing on LGBTQ hate crime, starting her inflammatory remarks by saying, “Thank you for staying, and sorry you have to listen to the white supremacy raise its ugly head, you know, throughout this hearing.”

The House by design is less august than the Senate, but this kind of language on the floor of Congress is still reprehensible. Watch:

Cori Bush, during a hearing on 'anti-LGBTQ violence': "Let me say to the witnesses… sorry you have to listen to the white supremacy raise its ugly head throughout this hearing." pic.twitter.com/F4xzvVaw6s

After dropping the supremacy bombshell, she continued her character assault: “…we’re here to fight it [white supremacy], but I just want to let you know that. The rise of hate and violence—”

At this point, she was cut off by ranking member Rep. James Comer (R-KY), who was clearly offended. “That — that, madam chair. I mean, my God,” he sputtered.

Bush wasn’t interested in hearing Comer and did not stop speaking, talking right over him: “…follows a surge of anti-LGBTQ+ legislation driven by Republican state lawmakers including in my home state of Missouri.”

After her diatribe was finished, Comer did get a chance to respond, and he was not pleased. He declined to opine on Bush’s rhetoric, instead choosing to highlight crime and Bush’s vocal anti-police stance:

"Perhaps Ms. Bush could come give us some pointers on how she's reduced crime in St. Louis since she's been in Congress? … Wait a minute, St. Louis has one of the highest crime rates in America. Maybe she can come tell us how to secure the border?" pic.twitter.com/luFyrajhq1

You know, I’m not even gonna comment on what Ms. Bush said, but I’ll say this: Crime is going to be a top priority for Republicans in this committee in the next Congress, and perhaps Ms. Bush could come give us some pointers on how she’s reduced crime in St. Louis since she’s been in Congress and what her ideas are to further reduce crime in St. Louis — wait a minute, St. Louis has one of the highest crime rates in America.

Bush has been a loud proponent of the defund the police movement but has been roundly criticized for hypocrisy when it was revealed that she has paid over $500,000 in private security from campaign funds over the last couple of years.

Cori Bush is one of the most controversial and frankly obnoxious representatives currently roaming the halls of Congress these days. She makes even fellow Squad members AOC (D-NY) and Ilhan Omar (D-MN) look palatable by comparison. Well, almost anyway. How you morph legitimate concerns regarding LGBTQ legislation into an accusation of racial hate, I don’t even know. It reveals the ongoing strategy by Democrats, however, which is to brand everything they don’t like as caused by white supremacy. The term is losing its meaning as they throw it against any person, cause, or policy that doesn’t fit their fancy. They lose all credibility when they do so.

The Los Angeles Times sunk to the lowest of lows with this kind of attack, ludicrously accusing black then-gubernatorial candidate and radio host Larry Elder of being “The black face of white supremacy.” Disgusting: