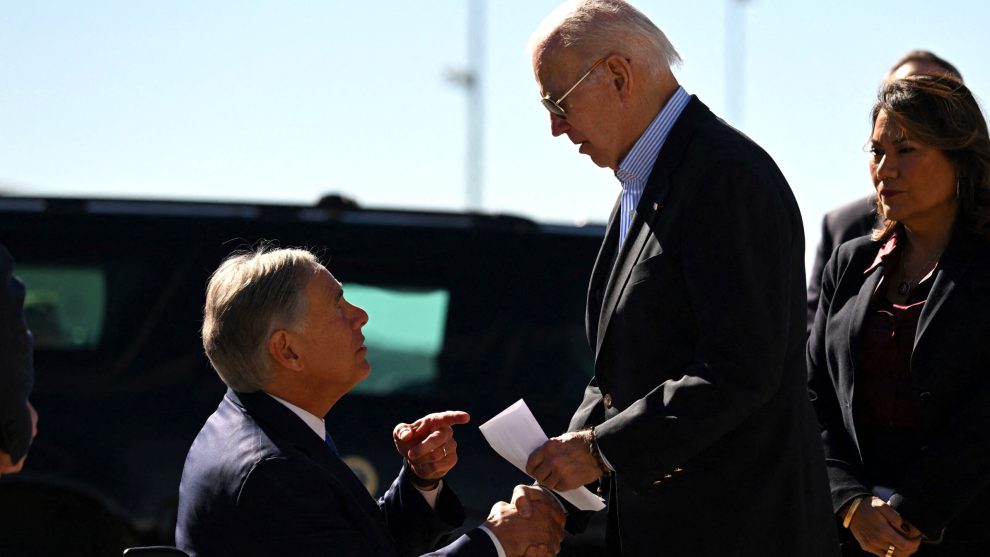 Texas Governor Greg Abbott (R) hand delivered a letter to President Joe Biden on Sunday during the president’s visit to the U.S.-Mexico border.

“Your visit to our southern border with Mexico today is $20 billion too little and two years too late,” the letter began. “Moreover, your visit avoids the sites where mass illegal immigration occurs and sidesteps the thousands of angry Texas property owners whose lives have been destroyed by your border policies.”

“Even the city you visit has been sanitized of the migrant camps which had overrun downtown El Paso because your Administration wants to shield you from the chaos that Texans experience on a daily basis,” the letter continued. “This chaos is the direct result of your failure to enforce the immigration laws that Congress enacted.”

Abbott noted in the letter how the U.S. border was significantly safer under the previous U.S. administration and that the illegal immigration crisis has exploded to the worst in the history of the country under Biden.

“Your open-border policies have emboldened the cartels, who grow wealthy by trafficking deadly fentanyl and even human beings,” the letter said. “Texans are paying an especially high price for your failure, sometimes with their very lives, as local leaders from your own party will tell you if given the chance.”

Abbott told the president that the crisis was caused because Biden violated his constitutional obligation “to defend the States against invasion through faithful execution of federal laws.”

Abbott advised Biden that when he finished “the photo-ops in a carefully stage-managed version of El Paso,” that he needed to:

You must comply with the many statutes mandating that various categories of aliens “shall” be detained, and end the practice of unlawfully paroling aliens en masse.

You must stop sandbagging the implementation of the Remain-in-Mexico policy and Title 42 expulsions, and fully enforce those measures as the federal courts have ordered you to do.

You must aggressively prosecute illegal entry between ports of entry, and allow ICE to remove illegal immigrants in accordance with existing federal laws.

You must immediately resume construction of the border wall in the State of Texas, using the billions of dollars Congress has appropriated for that purpose.

You must designate the Mexican drug cartels as foreign terrorist organizations.