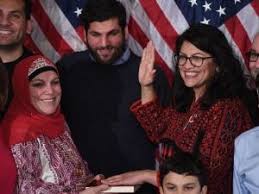 Congresswoman-elect Rashida Tlaib (D., Mich.) did not disclose the name of the source of funds for a fellowship that was paid by liberal billionaire George Soros—as required by the House ethics committee—and also disclosed a lesser amount than she received, according to a review of tax and financial disclosure forms.

A press release from 2016 shows that Tlaib was chosen for a “leadership in government” fellowship by Soros’s Open Society Foundations along with seven other individuals.

“The eight fellows, chosen from the senior ranks of federal, state, and local government, will work on a wide variety of issue areas: devising new ways to bring criminal justice reform to local prosecutors’ offices; developing new strategies for helping school children exposed to trauma; improving life outcomes for low-wage workers, immigrants, and boys and men of color; and closing the digital divide, and more,” the release reads.

A spokesman for Soros’s Open Society Foundations said Tlaib’s fellowship was terminated earlier this year when she informed the group she would be running for Congress..

See also  Buffalo Shooter’s Prior Threat, Hospital Stay Under Scrutiny
→ What are your thoughts? ←
Scroll down to leave a comment: