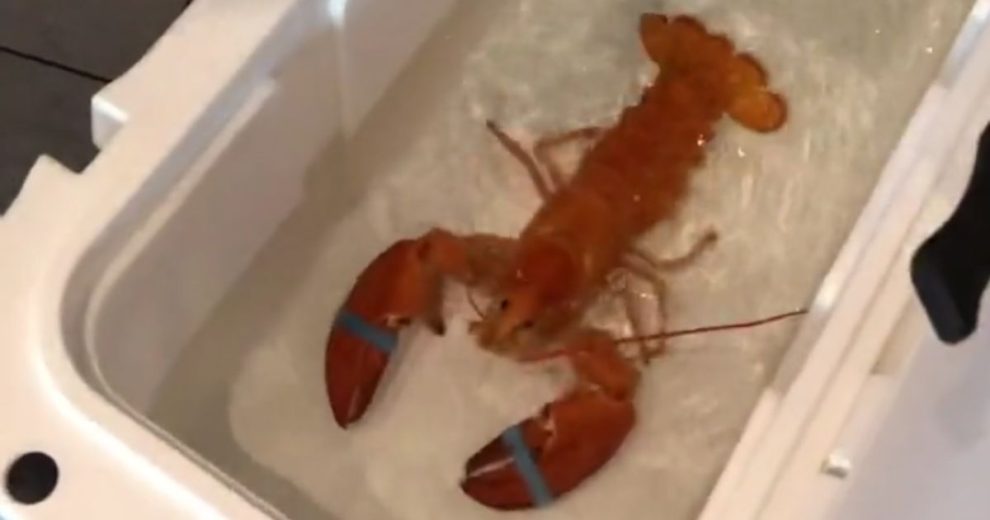 Most lobsters you’ll see are fairly similar. They’re generally a dark reddish-brown, only taking on the characteristic “red” color after being cooked.

But every once in a while, a rare color will pop up, and the very same color that makes them more at risk in the wild ensures their survival once caught, as they tend to be held onto as collector’s items.

The Red Lobster restaurant in Hollywood, Florida, recently stumbled across an unusual specimen that was bright orange, a 1-in-30-million find.

And what else could the restaurant reasonably name the orange crustacean but “Cheddar”?

When the unique creature was spotted in with the rest, manager Mario Roque knew she was something special and should be preserved.

“Sometimes ordinary miracles happen, and Cheddar is one of them,” he said, according to Patch.com.

“A group of incredible people helped us make this possible. We are so honored to have been able to save Cheddar and find her a good home.”

Senior director of communications for the chain restaurant, Nicole Bott, is happy Roque spotted the lobster and found her a good home with Ripley’s Aquarium of Myrtle Beach, South Carolina.

“We are incredibly proud of Mario and the team for recognizing what a special and rare creature Cheddar is and for working relentlessly to find someone to rescue her,” Bott said.

“It is an honor to be able to share the story of Cheddar and provide her a new home where she can be enjoyed by many for years to come, all from the safety of her tank.”

Staff from the aquarium made the trek to pick up the rare lobster and posted the video on social media.

There was something obviously very different about one of the lobsters that was shipped to a @RedLobster restaurant in Hollywood, Florida. Turns out, it was a rare one-in-30 million orange colored lobster! Read more here: https://t.co/en3Ed4h7JQ pic.twitter.com/Pzzpb7yoNP

“There was something obviously very different about one of the lobsters that was shipped to a @RedLobster restaurant in Hollywood, Florida,” RipleysMyrtleBeach posted on Instagram. “Turns out, it was a rare one-in-30 million orange colored lobster!

“Employees immediately went on a mission to rescue the unique crustacean and Ripley’s Aquarium of Myrtle Beach answered the call, happily welcoming the extraordinary orange lobster, ‘Cheddar’ to her new forever home.

“Cheddar joins Ripley’s Aquarium of Myrtle Beach as it celebrates a major milestone — 25 years of welcoming guests, making memories, and promoting an awareness of conservation.