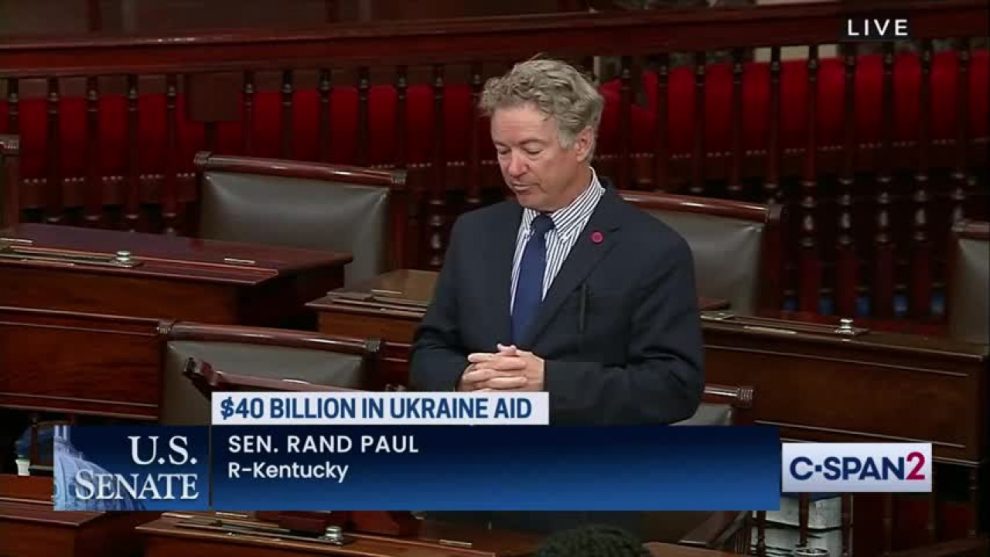 Senator Rand Paul said that the U.S. doesn’t need to be a “sugar daddy” for Ukraine while speaking about his move to block the quick passage of a new aid package for Ukraine worth about $40 billion.

Paul, a Republican lawmaker from Kentucky, made the comments Friday while speaking on The Clay Travis & Buck Sexton Show.

“It’s sort of the same argument that President Trump made. Everybody needs to step up, but the NATO allies need to step up and we don’t need to be the sugar daddy and the policemen of the world that we have to do everything,” he said.

Paul blocked a fast-tracked vote Thursday for aid package for Ukraine over his objections that the bill itself did not include the creation of a special inspector general to monitor how the aid is spent. Democratic Senate Majority Leader Chuck Schumer and Republican Senate Minority Leader Mitch McConnell both offered to allow an amendment vote on Paul’s requested change, but Paul said that he wanted the language to be added into the legislation.

He clarified while speaking on The Clay Travis & Buck Sexton Show that he is “sympathetic” to Ukraine, but his loyalty lies with the U.S. at the end of the day.

“I want Putin to be defeated. I think what he did is an awful aggression,” he said. “But my oath of office is to my country. If we bankrupt our country, who’s left to help anyone?”

The senator also took aim at both Republicans and Democrats who he said “are so eager to send our money to a foreign country they don’t want to have any sufficient oversight.”

The bill is still expected to pass some time next week, but without the unanimous consent in the Senate that was required for the fast-tracked vote, they will have to go through the typical procedural steps, according to The Washington Post.

Paul noted the expected passing in another tweet on Friday, but reinforced his desire to have an inspector general appointed to monitor the spending.

Agree. That’s why I offered an amendment for an Inspector General with a great record of tracking wasteful spending in Afghanistan. They’ll eventually pass the spending without me, as they always do, but at the very least they need to include oversight. https://t.co/ik5KVOMTM3

“They’ll eventually pass the spending without me, as they always do, but at the very least they need to include oversight,” he wrote.