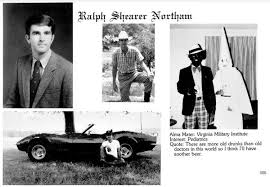 To say its been a bad week for (D) Governor of Virginia would be a understatement. He supported a bill which would allow infanticide. Than less than a week later college yearbook photos of a picture of the democratic governor appeared online which are not flattering. The pic is of the Democratic governor either wearing black face or in a KKK hood. The ironic part about this is that during the primary against Republican Ed Gillespie the now governor of Virginia accused his opponent of being a racist on multiple accounts. The left is very good at projection.

“Earlier today, a website published a photograph of me from my 1984 medical school yearbook in a costume that is clearly racist and offensive.

I am deeply sorry for the decision I made to appear as I did in this photo and for the hurt that decision caused then and now.

This behavior is not in keeping with who I am today and the values I have fought for throughout my career in the military, in medicine, and in public service. But I want to be clear, I understand how this decision shakes Virginians’ faith in that commitment.

I recognize that it will take time and serious effort to heal the damage this conduct has caused. I am ready to do that important work. The first step is to offer my sincerest apology and to state my absolute commitment to living up to the expectations Virginians set for me when they elected me to be their Governor.”

Governor Northern has declared his intentions to serve out his term. How Ed Gillespie’s opposition research missed this should be another story. I mean its in his college yearbook. That seems like it would be the first or second place to look to dig up potential dirt. To read more click here.