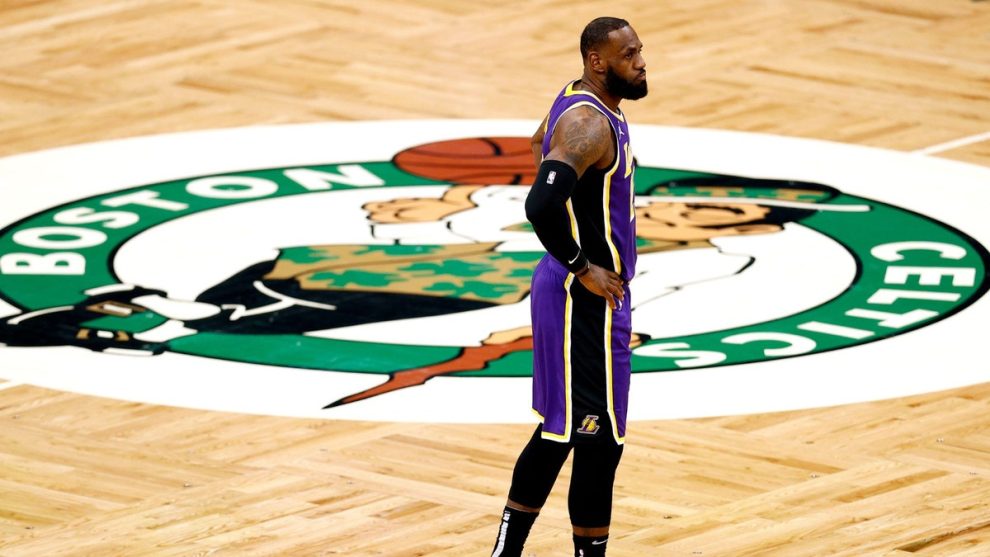 LeBron James, NBA star and part owner of the Boston Red Sox, had some harsh words for Boston Celtics fans on a recent podcast as the Los Angeles Laker criticized them for allegedly being “racist as f***” — despite previously saying that he had never experienced racism in the Massachusetts city.

James made the comments on the most recent episode of his talk show “The Shop.” When asked where he hated playing, James did not hesitate to name Boston as the toughest place to play.

Maverick Carter — a guest on the show and fellow Red Sox co-owner — asked James, “In basketball, there are fans that can literally take the game from you? You can feel like, ‘The fans is not going to let us win this one tonight?’ What place?”

Co-creator of the show Paul Rivera asked, “Why do you hate Boston?” The sure-fire NBA Hall of Famer shot back, “Because they racist as f***.”

“They will say anything and it’s fine. It’s my life,” he continued. “I’ve been dealing with it my whole life. I don’t mind it. I hear it. If I hear somebody like close by, I’ll check them real quick. I move on to the game. … They might throw something on you. I got a beer thrown on me leaving the game.”

In 2021, both Carter and James invested in the Fenway Sports Group which owns the Red Sox, Fenway Park, Liverpool Football Club, and the New England Sports Network (NESN).

“Well first of all, it’s great to be with such a great group with FSG,” James told the press after the deal was announced. “They’ve done so many great things over the years, and just that collective group of people — they’re just amazing to be partners with.”

“I think for me and for my partner Maverick, to be the first two Black men to be a part of that ownership group in the history of that franchise, I think it’s pretty damn cool,” James added.

The three-time NBA Finals champion was blasted on Twitter for his remarks.

Gerry Callahan, Boston radio legend and host of “The Gerry Callahan Show” podcast, tweeted, “Of course, he gives no examples, not even made up ones. Question is, have the Red Sox owners apologized to this a**hole yet?”

Of course, he gives no examples, not even made up ones. Question is, have the Red Sox owners apologized to this asshole yet? https://t.co/jvbYMwMVL9

OutKick writer Bobby Burack tweeted, “LeBron James is the biggest fraud on the internet,” while making note of his stake in the BoSox.

LeBron James is the biggest fraud on the internet. pic.twitter.com/OE2DmxkilD

In May of 2017, James also told the media that he had never personally been affected by racism in Boston.

His comments came in support of Baltimore Orioles centerfielder Adam Jones, who claimed that somebody called him the n-word from the stands of Fenway Park and threw peanuts at him during a game in Boston. Jones received a standing ovation from the Fenway crowd during his first at-bat the next day after the reported incident.

“I’ve been to Boston. I’ve played in Boston a lot I just try to have tunnel vision when I play I don’t … I can’t recall me ever hearing something that was racism towards me,” James told the media. “But I think it was great that the other guys spoke up for him not even on his own team. I think the guys from the Red Sox spoke up for Adam Jones saying like, ‘Hey fans, we need you guys to, you know, this is a situation where you guys need to have a standing ovation. Please do that because it’s not it’s not great for sport … it’s not great for society.”

A video of the standing ovation for Jones can be seen here:

James has an all-time series record of 5 – 2 against the Celtics in the playoffs for the Cleveland Cavaliers and Miami Heat — both teams in the Eastern Conference. Now as a Laker, the only time he will face the Celtics again in the postseason will be if both teams make it to the NBA Finals.