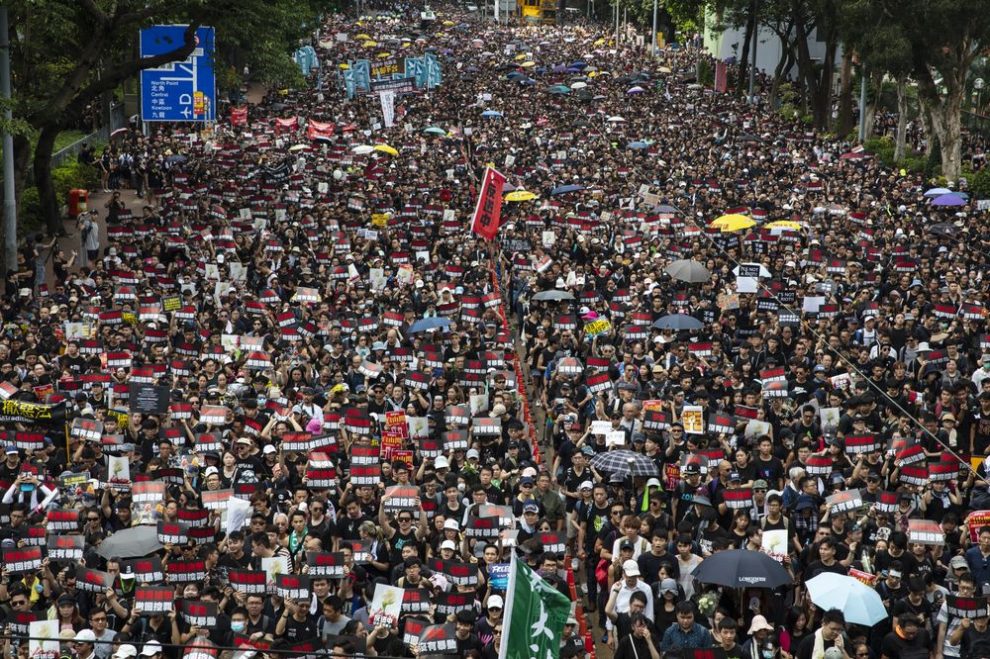 Protesters in southern Guangdong province, China, took to the streets last week to demand the communist government not build a polluting crematorium near their town, adopting slogans common to the Hong Kong protest movement, Time magazine noted on Monday.

The Hong Kong newspaper Apple Daily, which openly supports the anti-communist movement, reported the use of slogans such as “revolution of our times,” which China considers seditious hate speech, and “just like you, Hong Kong!” in Guangdong. As China heavily censors coverage of the Hong Kong protests and bans all statements of support from the few permitted social media sites in the country, the adoption of the Hong Kong movement’s slogans and tactics is a sign that people within Communist China are informing themselves regarding the protests through unapproved means.

The presence of support for the Hong Kong pro-democracy movement within China may signal greater problems ahead for the Communist Party, which spent much of 2018 crushing dissent from its Maoist ranks who see dictator Xi Jinping as too repressive of the proletariat and deviant from communist orthodoxy.

Since protests began in Hong Kong against growing communist incursion in June, China has amassed troops and weaponry in Shenzhen, the Guangdong city on the other side of the border with Hong Kong, and reportedly established a “Hong Kong crisis response” center there. While many interpreted those move as an attempt to intimidate Hong Kong, those forces could easily be turned against the people of Shenzhen itself if the protest movement spreads north out of Hong Kong.

The protests Time highlighted on Monday reportedly occurred in Wenlou, about 60 miles from Hong Kong, last week and throughout the weekend. Local officials had told residents they were in the process of constructing a “human ecological park” in what they later revealed would be the site of a crematorium. Crematoria in China, as they are run by the government, are rarely subject to environmental controls and release blasts of harmful smoke and chemicals into the environment. In places like western Xinjiang province, China uses crematoria to destroy local burial traditions and erase the memory of ethnic and religious minorities in the area, replacing them with atheist Marxists members of the Han majority ethnic group.

According to Apple Daily, local residents told the newspaper that “almost everyone” in town came out of their homes to protest throughout the past week, chanting “just like you, Hong Kong” and “liberate Maoming, revolution of our times.” Maoming is the city to which Wenlou’s government belongs.

The response to the protests has reportedly been a violent crackdown necessitating the presence of outside police forces. One resident, identified under the pseudonym Zhang, told Apple Daily that police began flagrantly beating anyone who attempted to approach an officer regardless of threat level, including the elderly and children. On Friday morning, the newspaper claimed that officers began going door-to-door looking for participants in protests to beat and disappear.

The newspaper estimated “dozens” of arrests and said hospitals in the area were flooded with injured protesters, though by the beginning of this week varying reports said police detained as many as 200 locals.

Some of those images have made it to the other side of the “Great Firewall,” appearing on Twitter through human rights organizations and media networks like Radio Free Asia.

#Guangdong protest is ongoing. Local government of Wenlou City, Guangdong province is trying to build a crematory bigger than 13 standard soccer fields in a sudden. How many people are you going to burn? And who? pic.twitter.com/w2Oalc2NQk

The organization Human Rights Campaign in China smuggled video out from a local hospital showing an injured young protester, claiming thousands of residents participated in the protests.

Apple Daily noted that the Chinese government media present in the country – the only permitted, legal media – have not reported on the protests at all and that social media sites like Weibo are blocking posts by locals urging solidarity and aid from the outside world. Some Weibo users have corroborated that report by posting search results on the platform for “Maoming” on Twitter, which is banned in China.

On Weibo, if u search Maoming, where an ongoing protest is taking place, u can barely see anything happening. Some ppl try posting pics, but u can’t open’em cuz of image censorship. It’s the same model when HK happened: create a information vaccume; the spinning starts later. pic.twitter.com/n9C3GJVJNA

Biden Answers Question On Court Packing: ‘I’m Not A Fan’ Scientists Aren’t Sure What’s Happening at Yellowstone National Park Trump Given Second Dose of Remdesivir ‘Without Complication,’ but ‘Not Yet Out Of The Woods,’ Doctor Says

Despite the apparent outsized use of violence against the protests, local government officials announced on Friday that they would postpone building the offending crematorium.

According to the South China Morning Post – based in Hong Kong but owned by the Chinese Alibaba corporation – protests continued on Saturday as locals did not believe suspending construction would result in the crematorium not being built.

“The [site] is close to housing and the source of our drinking water,” an unnamed woman told the newspaper. “We’re afraid of pollution. We don’t want money or compensation, we just want the crematorium project scrapped.”

The crackdown is reminiscent of China’s crackdown on Maoist protesters in the past year, many in defense of workers in Guangdong. Dictator Xi Jinping announced plans this year to create a “Bay Area” connecting Hong Kong, fellow autonomous city Macau, and Guangdong province by attracting technology companies to build factories and headquarters there. Tying local prosperity to the development of corporations controlled by the state, the Communist Party appears to hope, will quell pro-democracy movements as its members will no longer be able to afford to defy the government and risk their jobs.

Shenzhen, on the Hong Kong border, is at the heart of these efforts. Last year, however, the Jasic Technology factory in that city attracted Maoist protesters who demanding Xi respect the rights of workers as a fellow communist. The result was a violent clash between student and worker protesters and local police, who arrested dozens after violently suppressing them.

Maoist students have become a threat to Xi as they oppose the enslavement and abuse of workers in Chinese factories. In August 2018, Chinese police shut down two prominent Maoist websites, Red Reference and the Epoch Pioneer, and arrested their staffs.
House Speaker Nancy Pelosi, CNN’s Wolf Blitzer Clash over Coronavirus Relief — ‘You Really Don’t Know What You’re Talking About’ Trump Admin Leads 32 Nations in U.N. Rebuke: No International ‘Right’ to Abortion Five Takeaways From the Vice Presidential Debate

“[On Friday] at around 7.00 a.m., more than 20 people, mostly from Guangdong, came to our offices … armed with a search warrant and a notice of criminal detention made out for [fellow editor] Shang Kai,” Red Reference editor-in-chief Chen Hongtao told Radio Free Asia at the time. “They searched every corner of our offices, and even smashed a cupboard, and took our computers, our books away in a bunch of boxes.”

In November of that year, police violently assaulted and “disappeared” student activists on campuses in Beijing, Shenzhen, Guangzhou, and Shanghai for demanding the government adhere to their extremist Marxist beliefs. 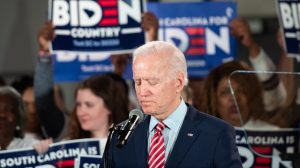 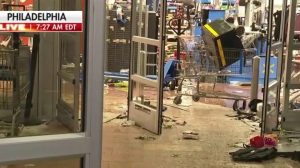