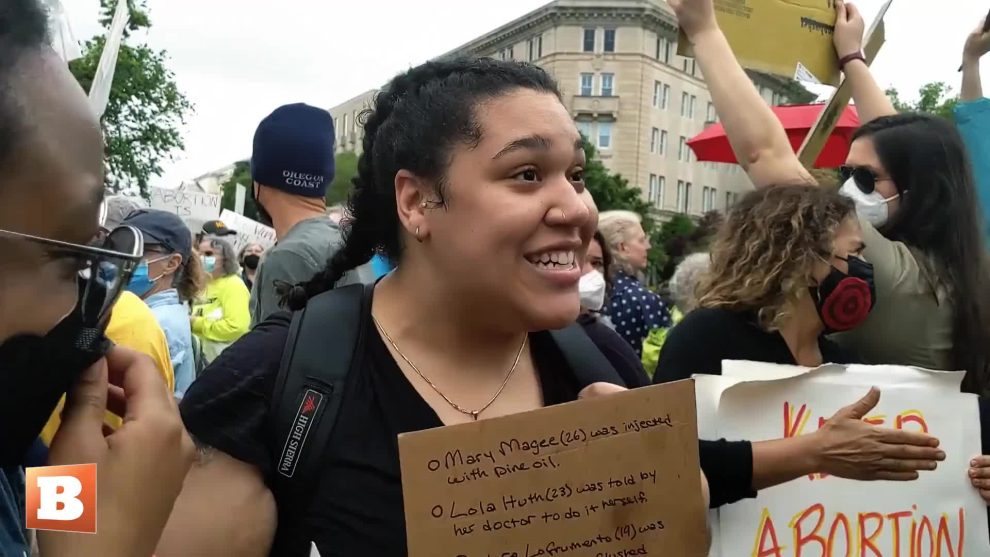 A pro-abortion activist mocked a man demonstrating outside the Supreme Court over the weekend, repeatedly shouting, “Hail fucking Satan!” according to video footage captured by Breitbart News.

“This is the church of Satan that I see out here. The church of choice where the only virtue is ‘do whatever you want and stomp on whoever gets in your way,’” a pro-life man said, triggering activists on the opposing side.

The pro-life man told the woman that Satan loves to hear that, prompting her short retort, “Oh, I know he does.”

The protest is one of many that has followed the leak of a draft Supreme Court opinion overturning Roe v. Wade. As Breitbart News detailed:

The opinion discusses at length whether the Constitution as originally understood included a right to abortion, concluding it does not. It then goes on for many pages of the features of stare decisis — the legal policy of when to adhere to court precedent — and explains why stare decisis does not require upholding Roe’s right to abortion.

Then finally, on page 62 it addresses the point that whoever betrayed the court was likely trying to make with this unprecedented violation of trust: “The American people’s belief in the rule of law would be shaken if they lost respect for this Court as an institution that decides important cases based on principle, not ‘social and political pressures.’”

“But we cannot exceed the scope of our authority under the Constitution, and we cannot allow our decisions to be affected by the extraneous influences such as concern about the public’s reaction to our work,” Alito responds for the court. “That is true both when we initially decide a constitutional issue and when we consider whether to overrule a prior decision.”

Pro-abortion activists have continued to express their horror over the possibility of abortion laws going back to the states, targeting the homes of Supreme Court justices and calling for “mandatory vasectomies.”

As a result of the protests targeting their homes, Supreme Court Justice Samuel Alito, who reportedly penned the leaked opinion, has been moved to an undisclosed location.