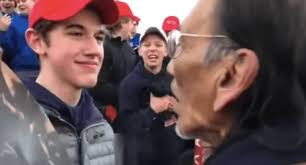 On Tuesday morning President Trump weighed in on the Maga kid from Ky.

Looking like Nick Sandman & Covington Catholic students were treated unfairly with early judgements proving out to be false – smeared by media. Not good, but making big comeback! “New footage shows that media was wrong about teen’s encounter with Native American”

Nick Sandmann and the students of Covington have become symbols of Fake News and how evil it can be. They have captivated the attention of the world, and I know they will use it for the good – maybe even to bring people together. It started off unpleasant, but can end in a dream!

This was covered heavily first by the liberal news media which painted these Kids as racist bigots, which couldn’t be further from the truth. After looking at all the available video its apparent that these high school kids where called all kinds of racist names and never did anything but smile and dance.

The exchange took place on the steps of the Lincoln Memorial while the children where waiting for there bus. Read more here.