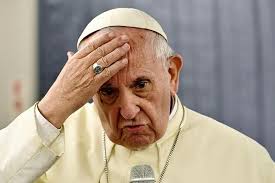 Pope Francis on Sunday compared the sexual abuse of children to human sacrifice as he addressed the Catholic Church’s top bishops at the end of a landmark summit to tackle paedophilia.

“Our work has made us realise once again that the gravity of the scourge of the sexual abuse of minors is, and historically has been, a widespread phenomenon in all cultures and societies,” he said.

“I am reminded of the cruel religious practice, once widespread in certain cultures, of sacrificing human beings – frequently children – in pagan rites,” he added.

Francis was speaking after a four-day meeting which he had opened by calling for “concrete measures” on tackling priests and handing 114 senior bishops a roadmap to shape the debate on how to stop a global scandal.

See also  Poll Finds Voters Blame Biden And Democrats For Running Economy ‘Into The Ground’
→ What are your thoughts? ←
Scroll down to leave a comment: