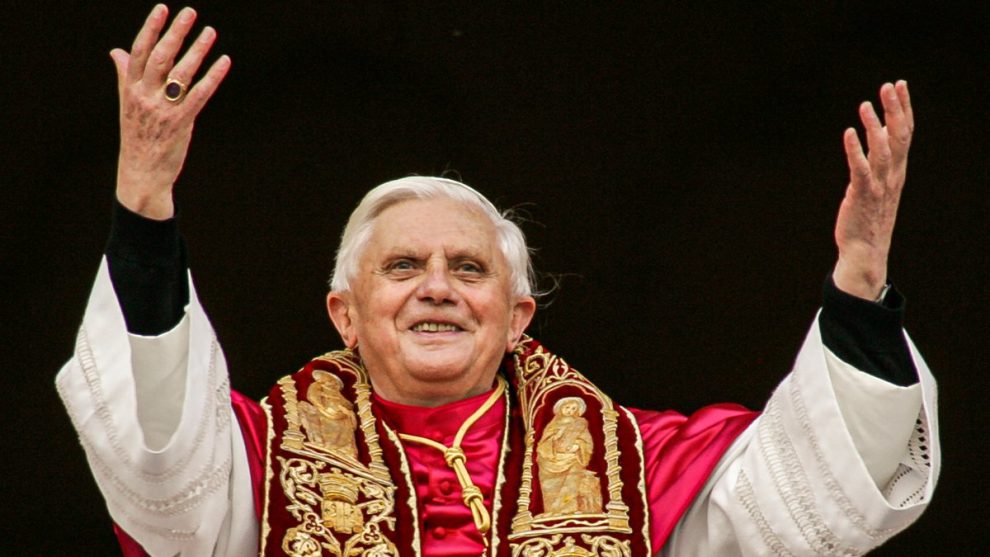 Benedict XVI, the 265th pope of the Roman Catholic Church, died peacefully in his bed Saturday morning, the Vatican announced.

“With sorrow I inform you that the Pope Emeritus, Benedict XVI, passed away today at 9:34 in the Mater Ecclesiae Monastery in the Vatican,” wrote Vatican spokesman Matteo Bruni in a statement. “Further information will be provided as soon as possible.”

On Wednesday, Pope Francis appealed for special prayers for Benedict, warning that the former pontiff was “seriously ill,” following the former pope’s temporary loss of consciousness on Tuesday evening.

Benedict succeeded Saint John Paul II in leading the world’s 1.3 billion Catholics, reigning from April 19, 2005 until his resignation on February 28, 2013. The German pope shocked the world when he announced his intention to resign, the first pope to do so in some 600 years.

“After having repeatedly examined my conscience before God, I have come to the certainty that my strengths, due to an advanced age, are no longer suited to adequately exercising the Petrine ministry,” he told the cardinals, adding that he was aware that his ministry must be accomplished “not only with deeds and words, but no less with prayer and suffering.”

For the past nine years since his resignation, Benedict has lived in a monastery within the Vatican walls, devoting himself to prayer and occasional writing, maintaining a low profile.

Born Joseph Ratzinger in Marktl am Inn, Benedict served as theologian, professor, archbishop of Munich, prefect of the Vatican Congregation of the Doctrine of the faith, pope and pope-emeritus.

A renowned theologian, a shy man gifted with great listening skills, a master at preaching even on the most complex topics in a simple way, in his almost eight years as Pope, Ratzinger met millions of people, made dozens of international trips, and wrote various encyclical letters to renew Church doctrine on various matters.

He fought energetically against the clerical sex abuse crisis, imposing a change of direction in Church norms in dealing with abusive priests.

In 2008, Pope Benedict visited the United States, where he praised America as “a land of great faith.”

“Your people are remarkable for their religious fervor and they take pride in belonging to a worshipping community,” he said at the time. “They have confidence in God, and they do not hesitate to bring moral arguments rooted in biblical faith into their public discourse.”

“Respect for freedom of religion is deeply ingrained in the American consciousness – a fact which has contributed to this country’s attraction for generations of immigrants, seeking a home where they can worship freely in accordance with their beliefs,” he added.

Earlier this year, Benedict offered several spiritual reflections on his upcoming passing and his attitude toward death.

“Quite soon, I shall find myself before the final judge of my life,” the emeritus pope wrote last February.

“Even though, as I look back on my long life, I can have great reason for fear and trembling, I am nonetheless of good cheer,” he continued, “for I trust firmly that the Lord is not only the just judge, but also the friend and brother who himself has already suffered for my shortcomings, and is thus also my advocate, my ‘Paraclete.’”

“In light of the hour of judgement, the grace of being a Christian becomes all the more clear to me,” he continued. “It grants me knowledge, and indeed friendship, with the judge of my life, and thus allows me to pass confidently through the dark door of death.”

“In this regard, I am constantly reminded of what John tells us at the beginning of the Apocalypse: he sees the Son of Man in all his grandeur and falls at his feet as though dead. Yet He, placing his right hand on him, says to him: ‘Do not be afraid! It is I…’” he concluded.

Matteo Bruni has announced that Benedict’s body will lie in state in Saint Peter’s Basilica beginning on the morning of Monday, 2 January 2023, the traditional liturgical feast of the Holy Name of Jesus, “for the faithful’s farewell.”