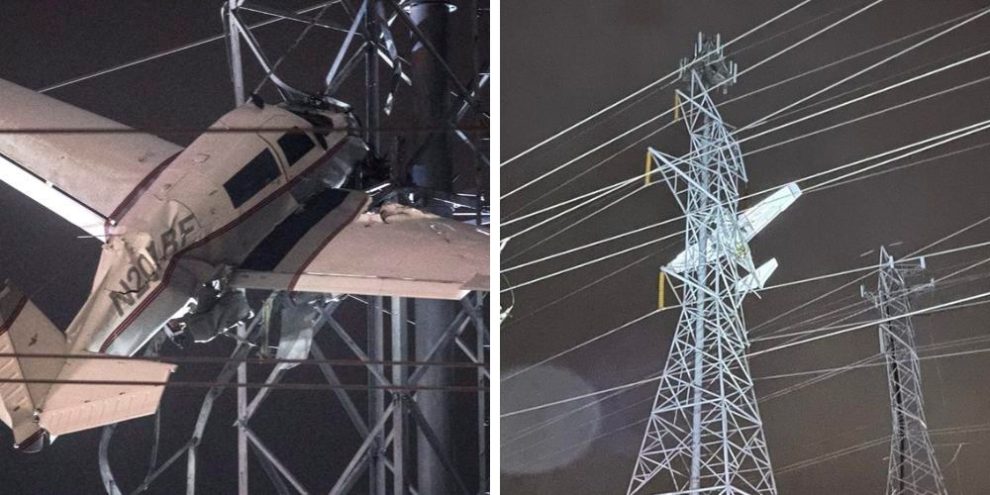 Fox 5 reported that the plane crashed into the power lines at approximately 5:30 pm in the Montgomery Village section of Gaithersburg. According to the FAA, the single-engine Mooney M20J departed from Westchester County Airport in White Plains, New York. Dense fog was reported in the area.

Pete Piringer, Chief Spokesperson for the Montgomery County Fire and Rescue Service posted on Twitter that the plane was suspended approximately 100 feet in the air, entangled in the power lines.

The two people onboard the plane were reportedly uninjured and rescue crews on the scene were in touch with the plane’s occupants via cell phone.

Maryland State Police identified the pilot as Patrick Merkle, 65, of Washington, DC, and the passenger as Jan Williams, 66, of Louisiana. Crews said it could be hours before the pair could be rescued.

There are widespread power outages as a result of the crash. Pepco originally reported about 85,000 customers were without power, but throughout the evening that number grew to 120,000.

Montgomery College: All @montgomerycoll campuses and locations will be CLOSED, Monday, November, 28, 2022.

The power outage affected the County’s 24-hour Crisis Center, county offices, and 40 schools. As a result, classes at public schools in the county were canceled for Monday, and county offices will be closed. Outages also impacted traffic lights, Metrorail service, and nearby hospitals.

According to Pepco, electric crews are assessing the damage and they are working closely with county fire and EMS crews. Pepco said, “We are awaiting clearance to the scene before crews can begin work to stabilize the electric infrastructure and begin restoring service.”

The FAA and National Transportation Safety Board are investigating the cause of the crash.