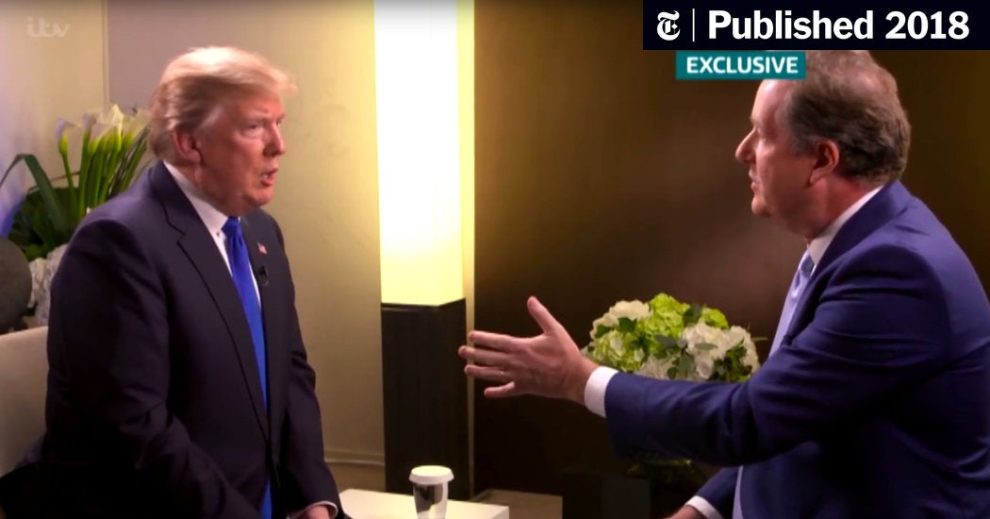 Piers Morgan’s new show on TalkTV has seen a slide in viewership so bad in just the first few days that executives at Rupert Murdoch’s News Corporation are discussing how much of a failure he is, and others are already privately comparing the disaster launch to the short-lived failed CNN+ streaming service.

Morgan’s interview with former President Donald Trump on his first two nights of the show, Piers Morgan Uncensored, seems to have spiked ratings significantly at the launch as on Monday — the first day of the show and of the interview — Morgan came in with nearly 400,000 viewers. But by Tuesday, the second day of the interview and the show, the public lost interest in Morgan and he dropped to just 215,900 viewers. Then, on the third day of his show after the Trump interview was over, Morgan fell by half again down to just 123,000 viewers.

That means in just two days Morgan has seen a 70 percent drop in viewers, and seems to be losing relevance and interest from the public quickly after Trump and his top communications aide Taylor Budowich crushed Morgan’s mishandling of a deceptively edited interview promo.

Morgan’s abject failures may also be decimating the entire TalkTV network effort, as his Wednesday guest Sharon Osbourne — who has her own show on the platform — also dropped in ratings after she appeared with the bumbling British broadcaster this week.

The original 30-second clip, released last week, made it appear as though Trump stormed off the set mid-interview upset with questions from Morgan about the 2020 election. But when Morgan released the deceptively edited promotional clip, Budowich — Trump’s communications director — released audio of the ending of the interview proving it was indeed deceptively edited to falsely portray Trump as storming off. Trump did no such thing, and the interview in reality ended cordially with Morgan thanking Trump at the end and talking about Trump’s recent hole-in-one alongside golf legend Ernie Els.

In the aftermath of the spat, Morgan has repeatedly attacked Budowich in tweets — but it seems like Budowich, and a result of his efforts Trump himself, are getting the last laugh here as Morgan’s failures are spiraling his show already. Some are even already comparing Morgan’s disastrous launch to CNN+, the failed streaming service that CNN disbanded mere weeks after its launch despite hundreds of millions of dollars of investment.

“I have no clue what he was thinking,” one media strategist told Breitbart News. “He launched a show aimed at a right-of-center audience, but deceptively edited the trailer in a failed attempt to embarrass President Trump. He lost all credibility with his target audience before his show even aired. The only question now is, does he last longer than CNN+? I don’t think so.”

A second media strategist source close to a Fox News primetime anchor told Breitbart News that there are conversations happening about this at Fox News and parent company News Corporation and that executives are “embarrassed” by Morgan’s conduct, and they are not sure that they can “salvage” the show. These conversations, this source says, intensified after Fox News star Tucker Carlson appeared on Morgan’s show on Wednesday night to try to promote it and elevate Morgan — but even Carlson was unable to generate enthusiasm or support for Morgan among the potential viewing audience.

Even Morgan’s social media engagement is “pathetic” according to some:

That’s some pathetic engagement for an account with 8 million followers.

What’s more, high-profile guests such as Caitlyn Jenner have canceled scheduled Morgan appearances as a result of the dustup with Trump — now Jenner is, because of contractual obligations with Jenner’s Fox News contributor contract, being forced to appear on Thursday’s show — and Morgan has been instead promoting content such as having alpacas on his program:

We've brought some alpacas in to calm down Piers during his first week on air.

In other words, Morgan only seems to be going downhill from a 70-percent drop in viewers in a few days.

“Piers Morgan is a washed up, has-been and some over produced and over edited promo trailer won’t change that. In three days he went from ‘Uncensored’ to ‘Unwatched,’” the former Apprentice executive said.