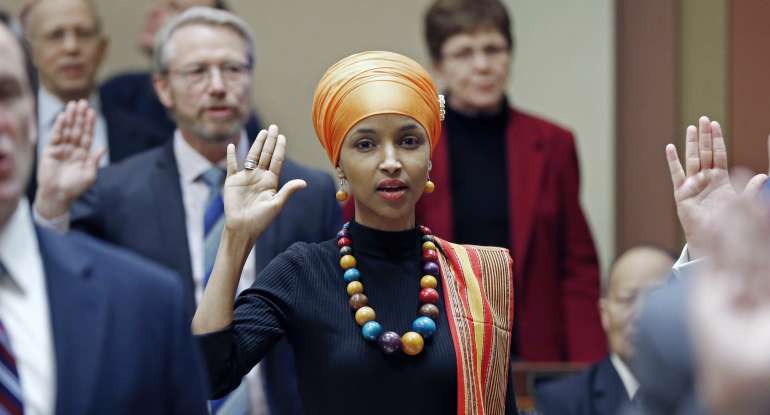 Conservative Review reporter Jordan Schachtel recently came upon an interesting tidbit in the Tusmo Times, a publication that covers the Somali community in the Twin Cities, Minnesota, area. He found a story there by the Somali-language paper’s founder and editor, Abdirahman Mukhtar, about a “closed-door meeting” that took place in New York City in September 2017 between visiting Turkish President Recep Tayyip Erdogan and a then-relatively unknown Minnesota state representative named Ilhan Omar.

Omar, a Muslim immigrant from Somalia who won election to the U.S. House of Representatives in November 2018, reportedly led a delegation of Somalis from Minnesota to meet with Erdogan in New York. Erdogan was in town for the annual UN General Assembly meeting and Omar flew in to meet him at a local hotel in downtown New York City.

What is most interesting about this meeting, however, aside from the fact that the President of Turkey agreed to meet with a local Minnesota state legislator, is that it took place in the very same hotel room where Erdogan, either just before or just after his meeting with Omar, met with the assembled top leadership of the U.S. Muslim Brotherhood.

This is obvious from the room’s carpeting and table and chairs arrangement: here is Erdogan posing with Ilhan Omar. 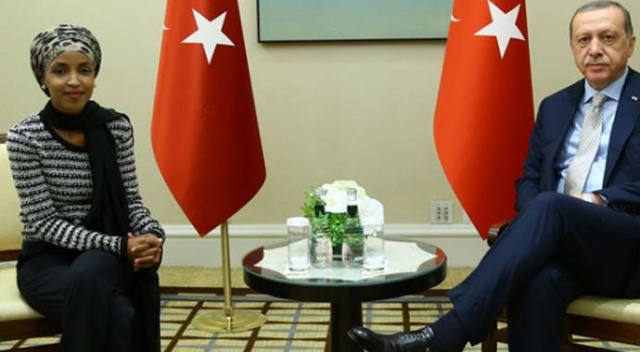 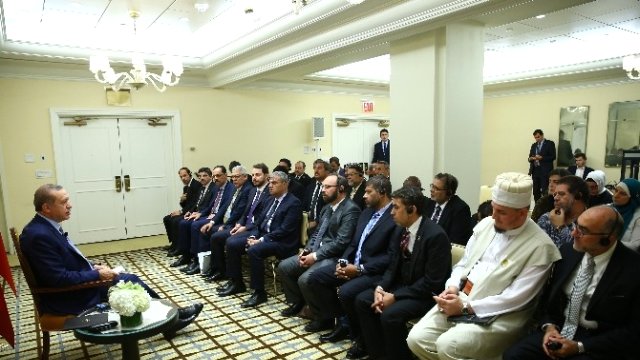 In this second photo with Erdogan are Nihad Awad, the executive director of the Council on American Islamic Relations (CAIR); Osama Abu Irshaid, the national director of American Muslims for Palestine (AMP); Mazen Mokhtar, the national executive director of the Muslim American Society (MAS); and Oussama Jammal, the secretary general of the U.S. Council of Muslim Organizations (USCMO), the umbrella political organization of the U.S. Muslim Brotherhood. Whether Omar herself met with these leading Brotherhood figures in that room is not known, but it seems unlikely that she would not have.

Now, it may be noted that this was not the first time that Omar and the Turkish regime connected. She traveled to Istanbul, Turkey, in early February 2017 to attend a conference organized by the local Turkish government and the British Embassy in Ankara billed as “Human Rights Defenders” that included hardcore leftists and pro-abortion activists. It is not known, however, whether Omar met with Erdogan or any of his senior officials on that trip.

The story continues, however.

The Islamic Association of North America (IANA), formerly known as The North American Council of Somali Imams (NACSI), is a large umbrella organization for the shariah-adherent Somali community of North America (U.S. and Canada). Headquartered on Hiawatha Avenue in the Minneapolis neighborhood often called “Little Mogadishu,” the IANA was founded in 2001 and today includes over 26 member mosques, Islamic centers, and other organizations. Among these are several located in Minnesota, including the Abu Huraira Mosque (Rochester), the Abubakar As-Saddique Islamic Center (Minneapolis), the Abubakar As-Saddique Islamic Center (Faribault), the Al-Ihsan Islamic Center (St. Paul) and the Dar-us-Salam Cultural Center (Burnsville).

Now, the kicker: the IANA formally joined the USCMO, in effect, the U.S. branch of Erdogan’s pro-Muslim Brotherhood Justice and Development Party (AKP), in 2018—that is, just months after Ilhan Omar, state representative of Minnesota, met with Erdogan in New York—and about one year after her February 2017 trip to Istanbul. That Rep. Ilhan Omar (D-Minn.) probably helped arrange that development seems hardly surprising now, in retrospect, as her close association with Brotherhood front groups like CAIR (the U.S. branch of the HAMAS terror organization) becomes as difficult to ignore as her blatant antisemitism.

For example, Omar’s own online bio notes that she was a former Advisory Board member for Minnesota Council on American Islamic Relations (CAIR). Then, on March 23, Omar was met with hundreds of protesters as she arrived at a Woodland Hills hotel in Southern California where she was the keynote speaker for a CAIR-Los Angeles fundraiser. Protesters there carried American and Israeli flags and shouted “Burn the Quran!,” “Ilhan Omar, go to hell!” and “Shame on you, terrorists!” At the event, Omar shared the podium with Hassan Shibly, executive director of CAIR-FL, who has made no secret of his animosity toward Israel and sympathy for HAMAS and Hizballah.

Just a month earlier, on Feb. 23, Omar had headlined an event in Tampa, Florida, advertised as “An Emergency Benefit Dinner for Yemen,” which was sponsored by the terror-connected Islamic Relief USA (IRUSA), a past sponsor of USCMO events.

Finally, although Omar has just run her first national-level congressional campaign, she already has racked up thousands of dollars in donations from an array of individuals with acknowledged Muslim Brotherhood front group connections, including CAIR, American Muslims for Palestine (AMP), Islamic Society of North America (ISNA), Muslim Public Affairs Council (MPAC) and the Muslim Students Association (MSA). AMP, CAIR and MAS are all founding members of the USCMO.