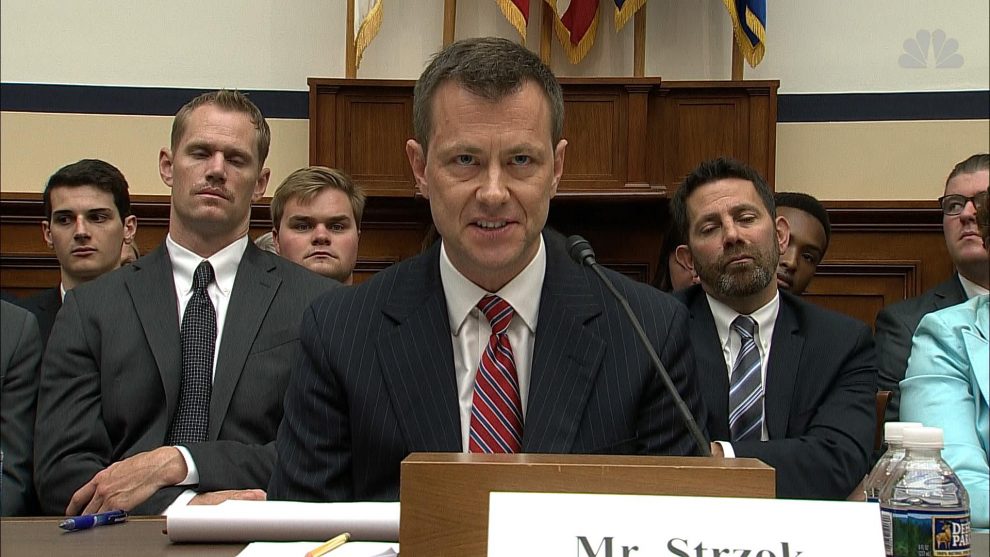 The Justice Department declassified a batch of internal FBI messages from Peter Strzok, the former counterintelligence official who oversaw the bureau’s investigation of the Trump campaign’s possible ties to Russia.

The messages, which Senate Republicans released Thursday, provide new insights into the thinking of investigators who worked on Crossfire Hurricane, the code name for the investigation into the Trump campaign.

The documents, obtained by The Daily Caller News Foundation ahead of their release, show Strzok and his colleagues discussing strategies for how to handle the investigation, as well as how to approach interviews with targets of Crossfire Hurricane.

The declassified documents also show that Strzok was provided with real-time updates as FBI agents or undercover sources were meeting with Trump campaign advisers Carter Page and George Papaodpoulos, who were early targets of the investigation.

Republican Sens. Ron Johnson and Chuck Grassley had asked Attorney General William Barr and FBI Director Christopher Wray to declassify the documents on Oct. 30, to help with their investigation of Crossfire Hurricane. The Justice Department declassified the records on Dec. 1.

Strzok’s messages, which are from the FBI’s Lync system, also contain numerous references to Christopher Steele, the former British spy whose dossier the FBI used to obtain surveillance warrants against Carter Page.

One message suggests that Strzok knew early on that Steele was a source for a story published in Yahoo! News alleging that Page had a secret meeting in Moscow with two Kremlin insiders.

“Looking at the Yahoo article, I would definitely say at a minimum Steele’s reports should be viewed as intended to influence as well as to inform,” Strzok wrote on Sept. 23, 2016.

Strzok, who was fired from the FBI in August 2018, was referring to a report from Yahoo! News about Page’s visit to Moscow in July 2016.

It would later be revealed that Christopher Steele was a source for the article, and that he had met with a handful of journalists in Washington, D.C. as part of an opposition research campaign commissioned by the DNC and Clinton campaign.

While Strzok indicated that he thought Steele was a source for the Yahoo! article, the FBI maintained its relationship with Steele and failed to inform the Foreign Intelligence Surveillance Court (FISC) that the ex-spy had contact with journalists.

The FBI cut ties with Steele, who had been a confidential human source for the bureau since 2013, after he spoke to a journalists for Mother Jones for another dossier-related story on Oct. 31, 2016.

The dossier has since come under intense scrutiny, as several of its allegations have been debunked. A Justice Department inspector general’s report released on Dec. 9, 2019, blasted the FBI’s Crossfire Hurricane team for failing to disclose key details about Steele and the dossier to the FISC.

Strzok’s messages also show that he and others at the FBI had inside information about CNN’s plans to publish a story about then-FBI Director James Comey’s briefing to Trump regarding allegations in the dossier.

“Also Carl Bernstein (yes that Carl) called OPA, said he got a ‘dossier’ from McCain.”

“Awesome,” Page replied. “Let Carl run it down then.”

CNN reported on Jan. 10, 2017, that Comey had briefed Trump on Jan. 6, 2017, regarding an allegation in the dossier that the Kremlin had a sexual blackmail tape against Trump.

David Kramer, a close associate of McCain’s, testified that he provided a copy of the dossier to multiple reporters in December 2016 and January 2017, including Bernstein and the BuzzFeed reporter who published the salacious document.

McCain had provided a copy of the dossier to Comey in a private meeting on Dec. 9, 2016.

The messages also provide a glimpse into Strzok’s theories about Papadopoulos’s role in the alleged collusion scheme with Russia. Strzok’s initial suspicions would later be debunked by the special counsel’s investigation, which found no evidence that any Trump associates conspired with the Russian government.

The FBI opened Crossfire Hurricane on July 31, 2016, based on a tip from an Australian diplomat regarding Papadopoulos. The diplomat, Alexander Downer, claimed that Papadopoulos had told him during a meeting in London on May 10, 2016 that the Russian government might help the Trump campaign.

Strzok wrote that the FBI wanted to find out more about the alleged offer to assist the Trump team. He speculated that Papadopoulos would have information that would implicate Carter Page and Paul Manafort.

Strzok did not explain why he thought those two Trump aides would have knowledge about collusion with Russia, but the theory is likely derived from the Steele dossier. In the dossier, former British spy Christopher Steele alleged that Page worked at the direction of Manafort on a “well-developed conspiracy of cooperation” with the Kremlin.

“I think our anticipation is he has visibility into a conversation about the Russian offer of help (and I’d be willing to bet if he talks, he fingers Page or Manafort),” Strzok wrote to Jennifer Boone, a deputy assistant director, the messages show.

Strzok wrote to Jonathan Moffa, a supervisory special agent, that he wanted to find out about Papadopoulos’s “demeanor” in the FBI interview.

“If he’s willing to work with us against either of them, I’ll reconsider.”

Strzok was notified shortly after that Papadopoulos, who was given the code name Crossfire Typhoon, was speaking to the FBI agents.

An FBI employee and Strzok then joked that Papadopoulos’s mother, who was with her son when the FBI approached for an interview, urged him not to go to the FBI’s offices for an interview, but that he went anyway.

“Ha, that’s funny re Typhoon,” Strzok wrote. “That’s what you get for not listening to mom.”

Papadopoulos pleaded guilty on Oct. 5, 2017, to making false statements to the FBI during the Jan. 27, 2017 interview. He was never charged with any crimes related specifically to Russia or any conspiracy involving the Trump campaign.

Instead, he was charged with making false statements about the timeline of his meetings in 2016 with Joseph Mifsud, a shadowy Maltese professor who Papadopoulos says told him that the Russian government had “dirt” on Hillary Clinton.

Papadopoulos volunteered the information about Mifsud to the FBI, but the special counsel’s office later charged him with lying about the dates of his meetings.