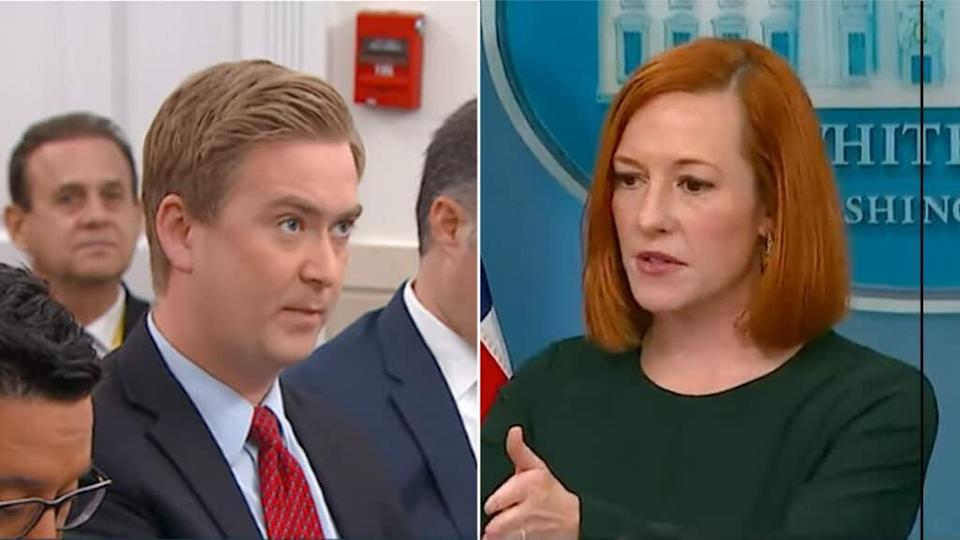 Watching Fox News White House Correspondent Peter Doocy go head-to-head with White House Press Secretary Jen Psaki is a sight to behold. He will hit her constantly with questions that she quite clearly doesn’t want to answer, and it’s brutal.

On Wednesday, he hammered for about four minutes, hitting various White House lies, be they about the Keystone XL pipeline or how gas permits actually work. It was embarrassing for her.

But my favorite part was at the start of their confrontation, when Doocy called out the Biden administration for trying to rebrand high prices as the “Putin Price Hike,” an apparent reference to a tweet White House Communications Director Kate Bedingfield tweeted in which she said, “For months Putin has been saber-rattling, and for months gas prices have been going up – up 75 cents since he began his military build-up. This is the #PutinPriceHike in action, and @POTUS is going to use every tool at his disposal to shield Americans from pain at the pump.”

“Why did you guys decide to rebrand the rise in gas prices as the #PutinPriceHike?” Doocy asked.

“I mean, if you want to use that on Fox, I welcome that,” she quipped because apparently, she thought it was funny.

“I think it’ll get a lot of airtime,” Doocy shot back, “because we have heard the President warned for months, the gas prices were rising because of the supply chain and because of post-pandemic demand. If you guys knew for months that this was going to be the ‘hashtag Putin price hike,’ why are we just hearing that now?”

That’s when Psaki went it a long rambling non-answer.

“Well, Peter, if we go back to six months ago, I don’t think anybody was predicting we would be exactly where we are as it relates to Russia and Ukraine,” she said, ignoring rising gas prices and the Biden administration’s excuse Rolodex for them through 2021. “As you know that events in the world including the invasion by Russia, of a foreign country does prompt instability and volatility in the global oil markets.”

That’s when Psaki cited “outside economists and analysts” who have said that Putin’s invasion and even his build-up of troops “led to a lot of the instability and volatility in the oil markets.”

“So therefore if President Putin’s build-up of military troops is leading to volatility and an increase in oil and prices, hence you have Putin pump gas pump rise.”