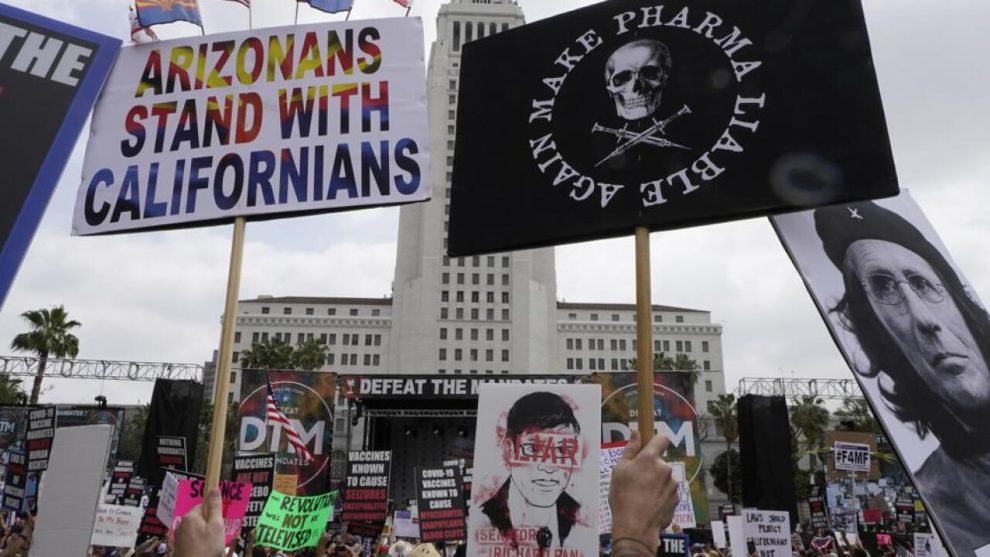 Thousands of people including truckers and firefighters from across the country gathered Sunday outside Los Angeles City Hall to protest vaccination mandates designed to slow the spread of COVID-19.

The crowd gathered at Grand Park to hear speakers and performers, while big-rig trucks from the “People’s Convoy” were parked on nearby streets. Members of the convoy jammed traffic during a Washington, D.C., protest earlier this year.

The peaceful crowd gathered to hear speakers and singers and was similar to a rally held at the same spot last year and to others staged around the country.

California battled a deadly winter coronavirus surge linked to the omicron variant but began easing masking and vaccination requirements this year as caseloads and hospitalization rates fell, which public health officials largely attributed to widespread vaccination and other safety measures.

However, the rates began to rise again a couple of weeks ago, leading to concerns the new, more infectious BA.2 variant was spreading.

Paul Schweit, 31, a New York firefighter and founder of the group Bravest for Choice, flew out with some teachers, transit operators, and others to support local public workers, he said.

Schweit said he has been on unpaid leave for five months for failing to comply with New York’s vaccine requirement for public employees. He believes he had COVID-19 but recovered.

“The people that held out this long believe that this is not about a shot. It’s about the freedom to make the choice for yourself for your own bodily autonomy,” Schweit said. “We are 100% not anti-vaccine. We support the individual. We believe the threat to the individual is a threat to all freedoms of the people.”

Los Angeles County and the city require their workers, including firefighters and police and sheriff’s deputies, to be fully vaccinated or to have medical or religious exemptions. Relatively few have faced disciplinary action.

As of last month, about two dozen employees, including a dozen fire department workers and several police officers, had been fired for violating vaccine mandate rules. The city has successfully fought anti-mandate lawsuits filed on behalf of firefighters and police department workers.

Organizers of the protest are opposing several COVID-19-related bills that have been proposed in the Legislature, although the broadest has been put on hold. Assemblymember Buffy Wicks, D-Oakland, shelved her measure that would have required all public or private employees or independent contractors to be vaccinated. Wicks cited easing pandemic conditions and opposition from public safety unions.