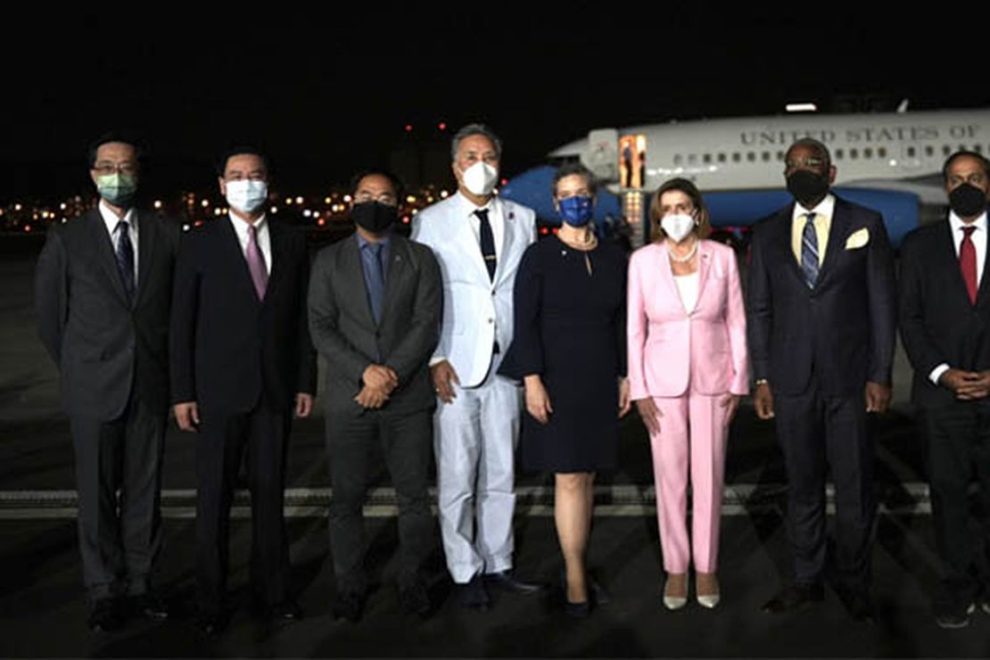 Even in a time of deep political divisions, with a potentially earthshaking midterm election coming up, Americans are united in their concerns about the new Evil Empire and its malignant influence upon the freedom, health, and security of the Western world.

A considerable number of sitting Republican legislators and former Trump administration officials expressed public support for Pelosi’s visit to Taiwan. The GOP caucus was far more vocally supportive of Pelosi than the perpetually befuddled Biden administration, even though President Joe Biden ostensibly campaigned on standing up to Communist China.

“What is the Pentagon thinking when it publicly warns against Speaker Pelosi going to Taiwan? If we are so intimidated by the Chinese Communists we can’t even protect an American Speaker of the House, why should Beijing believe we can help Taiwan survive? Timidity is dangerous,” Pelosi’s predecessor Newt Gingrich, the last Speaker of the House to visit Taiwan, said in a characteristic Republican comment.

Gingrich summed up the two primary strains of bipartisan support for Pelosi’s trip: China has no business dictating where Americans can travel, and demonstrating America’s sincere support for Taiwan is important.

On the latter point, polls consistently show strong American support for Taiwan, with allowances for the fact that domestic issues are understandably their paramount concern at the moment. Exactly one year ago, a Chicago Council Survey found 52 percent of Americans favored using U.S. military force to defend Taiwan if necessary – the highest level of support for that proposition in the history of the poll, and the first time support exceeded 50 percent.

A Morning Consult poll in June 2022 found less overall support for sending the U.S. military to protect Taiwan from invasion, a decline that could be partly explained by voter apprehension over the possibility of America and NATO getting drawn into the Russian invasion of Ukraine.

Morning Consult’s analysts added the interesting observation that among the relatively small portion of voters who said they were familiar with the details of the China-Taiwan relationship, support for the U.S. protecting Taiwan rose to 51 percent.

The poll found strong majority support for less dramatic propositions, such as establishing formal diplomatic relations with Taiwan and furnishing the Taiwanese with U.S. intelligence.

Near-majorities from both parties supported strong economic sanctions against China if it attacks Taiwan, even with the understanding that China is a major U.S. trading partner, so the American economy would suffer damage from such sanctions. Morning Consult’s analysts suggested Western corporations would be wise to acknowledge the position of voters by finding ways to reroute supply chains away from China.

Polls in Taiwan, meanwhile, show the Taiwanese losing confidence over the past few years that America would intervene against a Chinese invasion.

“Russia’s war in Ukraine appears to be changing Taiwan’s perception of the U.S. security commitment. A March survey in Taiwan, for instance, found that roughly one-third of respondents believed the United States would offer military aid to Taiwan. That’s a steep decline from the two-thirds who believed the United States would support Taiwan militarily when the same institute asked this survey question last October,” the Washington Post observed Tuesday.

This would buttress Gingrich’s point that visible demonstrations of American support for Taiwan, including official visits like Pelosi’s, are important to audiences in both Taiwan and China. China’s strategic and political calculations are influenced by how deeply the Taiwanese believe America would stand with them; Taiwan’s resistance to invasion or intense pressure will be stronger if they think the U.S. would join the fray.

Questions about Taiwan clearly reflect Americans’ concerns about the rise of China as the world’s most dangerous malevolent superpower. Polls show bipartisan majorities of Americans are worried about China’s human rights abuses, convinced that China is America’s top threat in the 21st Century, and wary of the growing relationship between China and Russia.

These polls tend to show more of a partisan split than support for Taiwan, as younger and more left-leaning Americans are considerably more likely to have a positive opinion of Communist China than moderates and conservatives from the heartland. Perhaps unsurprisingly, the younger cohort of left-leaning American voters are most inclined to accept Beijing’s view of China as a rising world superpower that enjoys moral equivalency with the United States, and deserves a chance at success.

In April 2022, the Pew Research Center found Americans’ negative views of Communist China at an all-time high, with over 90 percent saying the Chinese-Russian alliance is a threat to the United States.

The Wuhan coronavirus outbreak clearly influenced this view, with a five-percent gain in negative opinions since 2020 and six-percent in 2021. Pew’s respondents were also concerned with the growing power and political weaponization of the Chinese economy, with 43 percent convinced that China has displaced America as the world’s top economy.

U.S. politicians would be wise to take the concerns of their voters seriously. The coronavirus itself arguably did not make American voters as angry at China as they should be, but the pandemic did greatly increase public awareness of how many fragile supply chains run through China.

Human rights concerns such as the Uyghur genocide are troubling for Americans across the political spectrum, as can be seen from “socially conscious” athletes and entertainers squirming over their obedience to Beijing. Slavery is not a centuries-old historic injustice in China – it’s happening right now. The Chinese power elite is racist on a scale that makes complaints about “systemic racism” in America look quaint. China is promising to increase pollution without limit, while climate crusaders lecture Americans about giving up affordable transportation to save the Earth.

American politicians should also ponder that China’s authoritarian horrors are chilling fast-forward warnings of where authoritarianism in the West could lead. Americans worried about ministry-of-truth censorship imposed in the name of fighting “disinformation” have only to glance at China to see where such notions inevitably lead. Cancel culture is bad in the West, but getting canceled in China is far worse.

Chinese Communist influence on American academia and media is much worse than most U.S. voters realize. At a time of deep public concern about malicious influences in the classroom, Americans will expect their leaders to stand up against malevolent foreign powers infiltrating higher education.

Whatever else Americans from various political and demographic quarters might think about the menace of Chinese communism, it was a clarifying moment to see Chinese officials threatening the Speaker of the House with imprisonment or death for daring to visit Taiwan. Naturally domestic issues will dominate the midterm elections, but Beijing’s use of economic leverage to control foreign companies and media, and its stranglehold on vital supply chains, means China is a domestic issue.