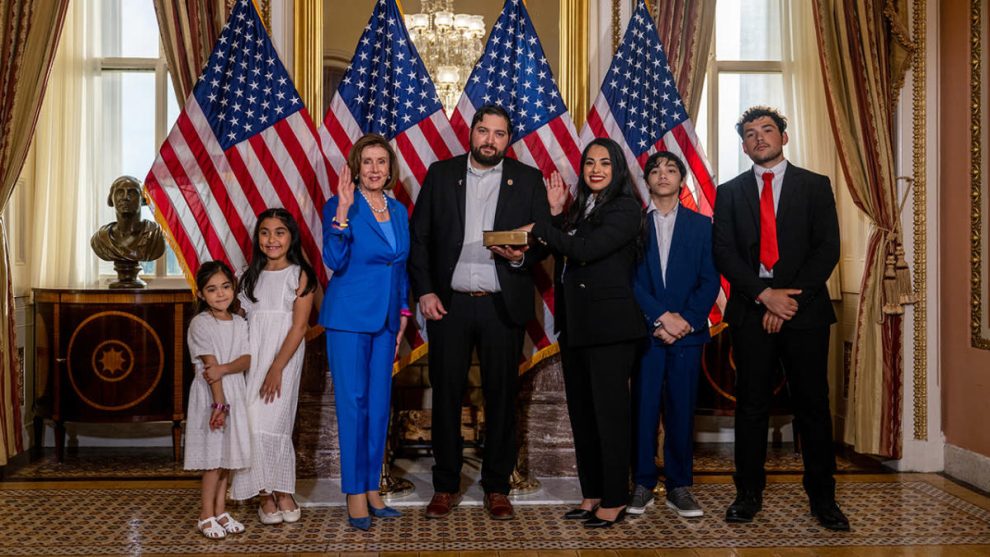 We reported how during the photo op for the swearing-in of Rep. Mayra Flores (R-TX), that House Speaker Nancy Pelosi appeared to shove Flores’ young daughter, giving her an elbow to the side. But the move was caught and widely shared on Twitter.

Then Mayra Flores responded and confirmed that indeed, her daughter had been pushed.

I am so proud of my strong, beautiful daughter for not allowing this to faze her. She continued to smile and pose for the picture like a Queen.

No child should be pushed to the side for a photo op. PERIOD!! https://t.co/TA50EntDoq

Flores praised her daughter for not letting it phase her and standing her ground, but noted that no one should be pushed for a photo op, in a pointed message to Pelosi.

So, I was curious as to what Nancy Pelosi would ultimately say about the whole situation. But the response from her spokesperson and deputy chief of staff, Drew Hamill was just so lame and unbelievable, it’s almost like he didn’t even bother to look at the video or he completely disregarded what Flores said. I thought Pelosi might deny it, but Hammill essentially admitted that Pelosi had pushed the child; he gave the explanation that she was trying to push her to make sure that the child got into the picture.

It’s sad to see “news outlets” that know better misrepresent the Speaker’s effort to ensure Rep. Flores’ daughters wouldn’t be hidden behind her in all of the photos of such an important moment for their family. https://t.co/Dm0oXtwF7V pic.twitter.com/KDyI4MfaOj

So, I have a few issues with this explanation. First, by shoving her to the side, she’s pushing her further out of the picture. If you wanted to make sure she got in the picture, you might say, “Honey, move in the front so you can get in the picture.” Not shove her. Yet, the girl wasn’t behind her, so the explanation doesn’t make a lot of sense.

Second, why is she touching the child at all, much less with a rude elbow shove? She seems to think she’s just entitled to touch the child much less give her a shove. Since when?

Notice what’s missing in all this ‘explanation’ from Hammill as well: an apology. Both Flores and the child know you shoved her. If you thought you were doing it for some higher purpose (I don’t believe you), but where’s the apology to smooth over the situation? Even a “well, that wasn’t what was meant, but we’re sorry it was taken that way.” They didn’t even go that far, at least not in the response from Hammill on Twitter. Instead, Hammill attacks Fox News and others for daring to report on it. It isn’t Fox making it up; the video shows what happened and Flores confirmed it. But Hammill shows how they spin to attack– even now–anyone who just reports what occurred. Talk about gaslighting.

Hammill was ratioed into next week on Twitter. Safe to say, virtually no one believed him.

Pelosi could just apologize and then everyone would move on.

The excuses for what we can see with our own eyes just makes it worse. https://t.co/JilTUclu6J

Flores’ win in a historically Democratic district is a harbinger of the wave to come in November, and maybe that’s what was on Nancy’s mind. Pelosi got a message from that little girl that she was going to stand in there. She’s going to get another message from voters, come November.