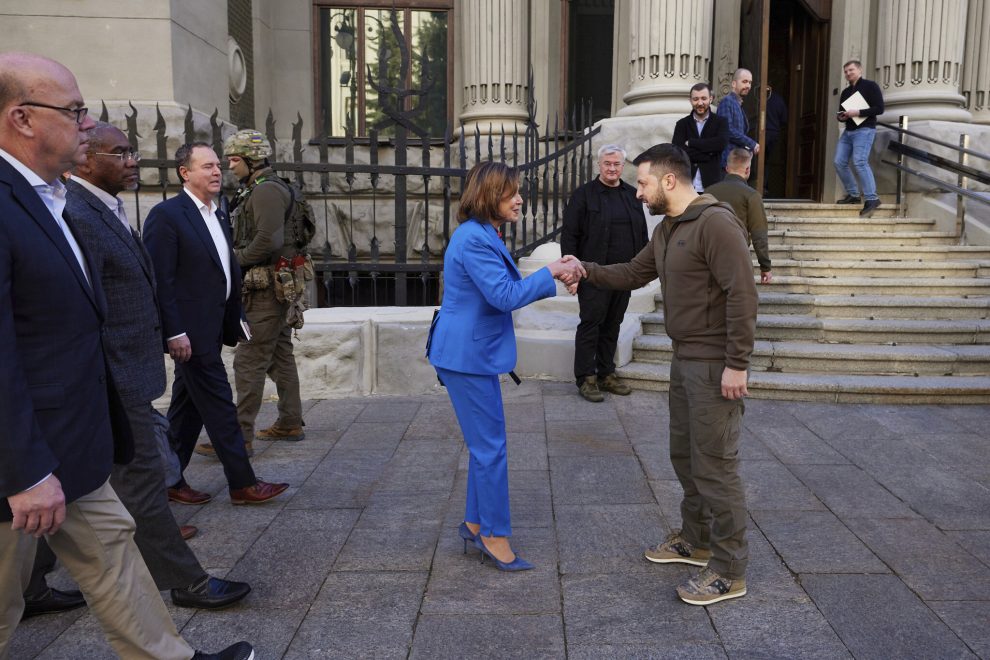 House of Representatives Speaker Nancy Pelosi met Ukrainian President Volodymyr Zelenskyy in Kyiv, the two sides said on Sunday, in the latest show of support for Ukraine’s fight against Russia by a senior Western politician.
Footage posted by Zelenskyy on Twitter showed him, flanked by an armed escort and dressed in military fatigues, greeting a congressional delegation led by Pelosi outside his presidential office.

“Our delegation traveled to Kyiv to send an unmistakable and resounding message to the entire world: America stands firmly with Ukraine,” Pelosi, the highest ranking U.S. official to visit Ukraine since Russia invaded on Feb. 24, said in a statement. She condemned Russian President Vladimir Putin’s “diabolic invasion.”

Moscow calls its actions a “special military operation” to disarm Ukraine and rid it of anti-Russian nationalism fomented by the West. Ukraine and the West say Russia launched an unprovoked war of aggression.

Western nations have imposed broad economic sanctions on Russia and have been shipping increasing quantities of weapons to help Ukraine defend itself.

Pelosi said on Friday she hoped to pass a $33 billion aid package for Ukraine that President Joe Biden has requested “as soon as possible.”

Moscow has turned its focus to Ukraine’s south and east after failing to capture Kyiv in the early weeks of a war that has flattened cities, killed thousands of civilians and forced more than 5 million to flee the country.

Russia’s defense ministry accused Ukraine’s forces of shelling a school, kindergarten and cemetery in the villages of Kyselivka and Shyroka Balka in the occupied southern Kherson region, the Russian RIA news agency said on Sunday.

The ministry said civilians had been killed and wounded but gave no further details. There was no immediate response from Ukraine and Reuters could not independently verify the report.

Russian forces captured the town of Kherson, 100 km (60 miles) north of Russian-annexed Crimea, in March and since then have mostly occupied Mariupol, a strategic eastern port city on the Azov Sea.

Ukraine’s military said in a bulletin on Sunday that Russian forces were fighting to break beyond Kherson’s administrative borders and prepare the way for attacks on the cities of Mykolayiv and Kryvyi Rih.

In Mariupol, Russia declared victory on April 21 even as hundreds of holdout Ukrainian troops and civilians took shelter in the city’s bombed out Azovstal steel works.

On Saturday, a Ukrainian fighter inside said that 20 women and children had made it out of the sprawling plant.

“We are getting civilians out of the rubble with ropes – it’s the elderly, women and children,” said the fighter, Sviatoslav Palamar.

Palamar said Russia and Ukraine were respecting a local ceasefire and he hoped the evacuated civilians would be taken to the city of Zaporizhzhia to the northwest.

Russia’s defense ministry said on Sunday that 46 civilians had left the area around the steel plant the previous day.

In the east, Moscow is pushing for complete control of the Donbas region, where Russian-backed separatists already controlled parts of Luhansk and Donetsk provinces before the invasion. Russian forces carried out missile strikes across the south and east on Saturday, Ukrainian officials said.

Serhiy Gaidai, the governor of the Luhansk region, in a post on social media on Sunday, urged people to evacuate while it was still possible.

Zelenskyy said in a late-night video address on Saturday that Russia was “gathering additional forces for new attacks against our military in the east of the country” and “trying to increase pressure in the Donbas.”

Despite weeks of peace talks, both sides looked to be as far apart as ever on Saturday.

Ukraine accuses Russian troops of carrying out atrocities in areas near Kyiv from which they have since been pushed back in early April, a claim denied by Moscow. Negotiators last met face-to-face on March 29 and have since spoken by video link.