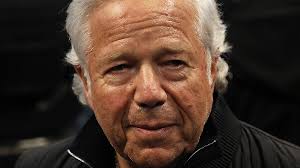 New England Patriots owner Robert Kraft, one of the most powerful men in American football, was charged today on two counts of soliciting prostitution in connection to a recent law enforcement bust on massage parlors in Florida that, according to law enforcement, were used for prostitution and human trafficking. The news comes a few weeks after the Patriots won their sixth Super Bowl and days after Kraft appeared at the NBA All-Star game.

In a press conference Friday morning, Jupiter Police chief Daniel Kerr said Kraft was charged with two counts of soliciting prostitution, and that a warrant for his arrest is with the state’s attorney’s office. Kerr said there is video evidence of Kraft involved in sex acts in a massage parlor on two occasions. Twenty-five people total were charged with soliciting prostitution at the Orchids of Asia spa in Jupiter.