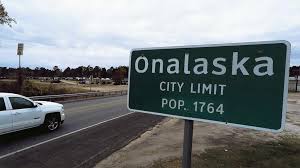 The Texas town of Onalaska can be reached by automobile and boat. The town barely registers as a small dot on a road map of the massive Lone Star state.

But, as reported by WFAA TV, there are more than 1,000 small airplanes registered to the town even though Onalaska has no airport. One source said it makes it easier for smuggling across borders—whether it be people, drugs or weapons.

WFAA’s investigation found that aircraft registrations funneled through two post office boxes in Onalaska. According to the 2010 U.S. census, the town has a population of 1,764, meaning that there were enough registered aircraft for more than half of its citizens. Onalaska has more registered planes than New York, San Antonio, Seattle and San Diego.

The report said that not only were the aircraft owners not in Texas—they’re not even in nearby states.

The town has become a hub for foreigners to anonymously register their planes at $5 apiece, leading to speculation that criminal activity could be behind the phantom planes that were registered here, but never touch down nor take off.

See also  CRT Symposium Speaker Calls Diversity of Thought 'White Supremacist' Excrement
→ What are your thoughts? ←
Scroll down to leave a comment: