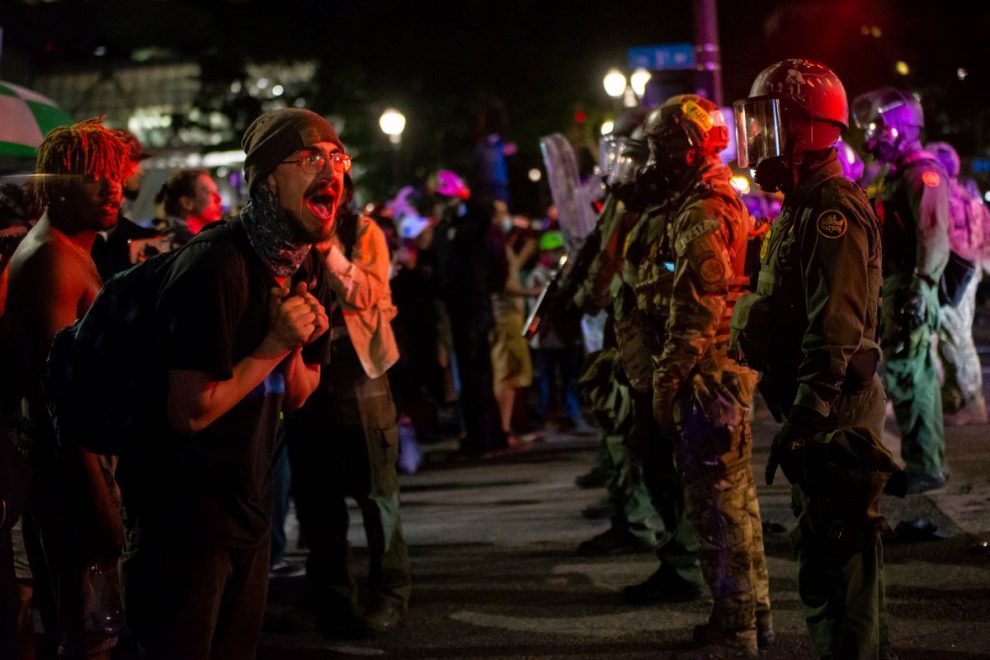 Oregon Gov. Kate Brown (D) blamed “right-wing vigilantes” and “armed white supremacists” for the bloodshed in the city of Portland during a Sunday press release.

Brown called to stop the “cycle of violence” during the press release, which announced additional law enforcement resources for the city of Portland, but did not recognize the lawless acts of violence committed by protesters on a nightly basis, such as targeting police with commercial-grade fireworks, rocks, and lasers, and vandalizing federal buildings. Instead, she berated “armed right-wing vigilantes” and specifically targeted the “Patriot Prayer” group, which saw an alleged member shot and killed in Portland on Saturday.

“The right-wing group Patriot Prayer and self-proclaimed militia members drove into downtown Portland last night, armed and looking for a fight. Every Oregonian has the right to freely express their views without fear of deadly violence,” Brown said, vowing that she will “not allow Patriot Prayer and armed white supremacists to bring more bloodshed to our streets.”

“Time and again, from Charlottesville to Kenosha to Portland, we have seen the tragic outcome when armed right-wing vigilantes take matters into their own hands,” Brown said. “Gun violence is never, ever the answer.”

“Change will not come overnight, and, as we have seen in these last months, it does not come easily either. But we are building a more just future,” she continued, promising to “bring all voices to the table to help end the nightly confrontations.”

“But that will only come if we commit ourselves to do the hard work to bring about real change and racial justice,” she added.

The victim of Saturday’s fatal shooting, which occurred after a pro-Trump caravan moved through the city, is reported to be Aaron “Jay” Danielson, who was reportedly wearing a Patriot Prayer hat.

The Oregonian reported that police are investigating 48-year-old Michael Forest Reinoehl as a suspect in the fatal shooting. Reinoehl is an alleged Black Lives Member supporter who once identified himself on social media as “100% ANTIFA all the way.” According to reports, Reinoehl is believed to have been participating in the riots that have dominated Portland since May 25 and was arrested on weapons charges, but released earlier this year.

“On July 5 at one of the demonstrations, Reinoehl was cited at 2:10 a.m. in the 700 block of Southwest Main Street on allegations of possessing a loaded gun in a public place, resisting arrest and interfering with police,” the Oregonian reported.