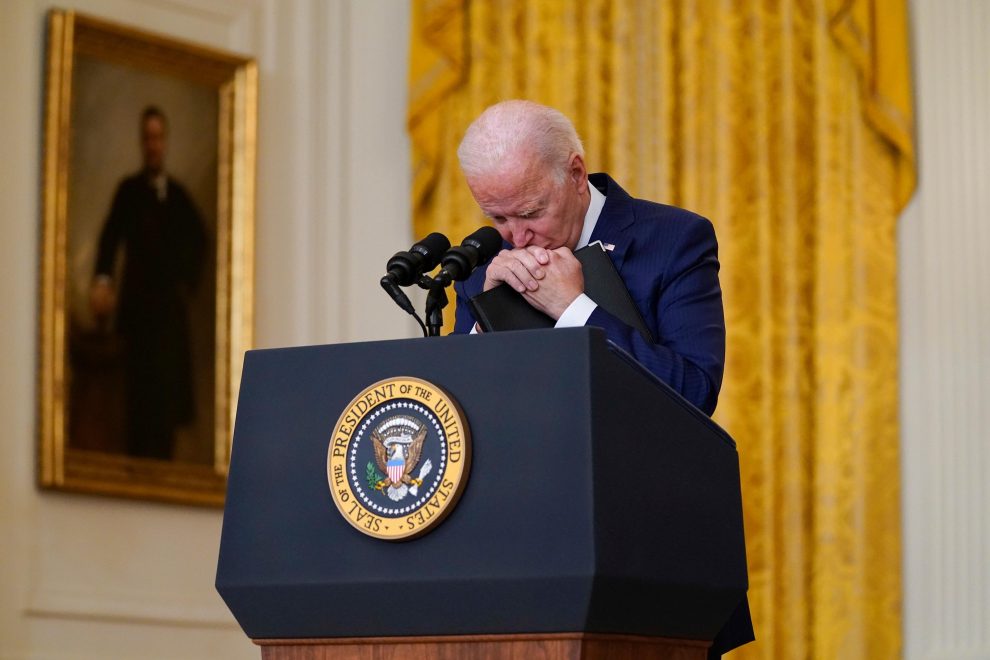 As Rick Moran noted on Tuesday, Old Joe Biden just boasted again about how powerless patriots are against his all-powerful and increasingly authoritarian federal behemoth. Biden practically thumped his chest as he declared: “I love my right-wing friends who talk about” – and here he mockingly imitated their dramatic tones – “‘the tree of liberty is water of the blood of patriots.’ If you need to work about taking on the federal government, you need some F-15s. You don’t need an R– AR-15.”

Has any president in American history so delighted in taunting his citizens? And has anyone noticed how Biden, in a single mangled quip, just destroyed two years of the Left’s painstaking work in constructing the Jan. 6 “insurrection” narrative?

BIDEN: "If you need to work about taking on the federal government, you need some F-15s. You don't need an AR-15!" pic.twitter.com/KZ3gHrSpAl

Biden’s quote from his “right-wing friends,” “the tree of liberty is water of the blood of patriots,” was, as Rick noted, a garbled version of Thomas Jefferson’s adage: “The tree of liberty must be refreshed from time to time with the blood of patriots & tyrants.” Biden was saying, of course, that in our age, such sacrifices were fruitless: the federal government is so powerful that it is unassailable, and so as its tyranny grows, unless patriots can somehow get hold of some fighter jets, they were out luck.

All right, Joe. Point taken. But wait a minute here. On Jan. 6, 2022, Biden stood in the Eisenhower Executive Office Building and said solemnly: “One year ago today, in this sacred place, democracy was attacked — simply attacked. The will of the people was under assault. The Constitution — our Constitution — faced the gravest of threats.”

Then on Jan. 6, 2023, he said it again: “Two years ago, on January the 6th, our democracy was attacked. There’s no other way of saying it. The U.S. Capitol was breached, which had never happened before in the history of the United States of America, even during the Civil War. A violent mob of insurrectionists assaulted law enforcement, vandalized sacred halls, hunted down elected officials — all for the purpose of an attempt to overthrow the will of the people and usurp the peaceful transfer of power.”

As we have come to expect from Joe Biden, none of this was true, not even the bit about how the U.S. Capitol had never before been breached in American history. Back in 1814, just before Old Joe entered the Senate, the British burned the Capitol building. Then in 2007, Biden told David Letterman that he himself had breached it, accidentally, at age 21 (which was in 1963, kids, 59 years ago).

Biden claimed fancifully that he wandered into the Senate chamber: “In those days, no guards stopping you everywhere. And they just got out of session. I walked in the back, all of the sudden I found myself in the chamber. I was stunned. I walked up, sat down in the presiding officer’s seat, guy grabbed by the shoulder, said: ‘you’re under arrest.’” Joe is well-established as a serial liar, so this story is best taken with a massive amount of sodium and serves as a reminder that the alleged president can by no means be taken at his word.

That’s doubly true for his nonsense about how the defenders of “our democracy” on Jan. 6, 2021 were “outnumbered and in the face of a brutal attack,” but nonetheless, “our democracy held. We the people endured. And we the people prevailed.” The Jan. 6 protesters were not armed. Was there ever really any possibility that they would actually overcome the combined force of, as Joe enumerates them, “the Capitol Police, the D.C. Metropolitan Police Department, the National Guard, and other brave law enforcement officials”? They had no leader (with the highly questionable exception of Ray Epps), no plan, no goal, no weapons. They were let into the Capitol by police officers who held the doors open for them.

If Joe Biden were consistent and honest, and of course, those ships have sailed a long, long time ago, he would admit that there was absolutely no danger of the government falling on Jan. 6, 2021. The protesters didn’t have F-15s, or AR-15s either, for that matter, and now Old Joe has stated openly that without that kind of firepower, patriots don’t stand a chance against tyranny. But if that’s true, then the Jan. 6 “insurrectionists” never had a chance.

In reality, of course, there was no insurrection at all. The whole thing is a massive lie that the Left has constructed in order to discredit, marginalize, and destroy the America-First faction in American politics. Biden, in the grip of dementia, can’t keep the story straight, and now he has inadvertently torpedoed the entire Leftist narrative.