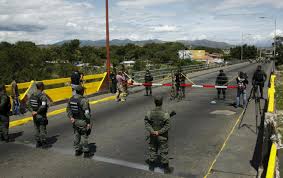 One person has been killed and 12 are injured after Venezuelan troops opened fire on civilians trying to keep a border checkpoint open for aid deliveries.

Troops arrived at a checkpoint set up by an indigenous community in Kumarakapai, on Venezuela’s southern border with Brazil early this morning.

The villagers are believed to have been trying to keep open a section of the border so that aid could be moved into the area from Brazil.

See also  New CBS Poll Is 'Damning Indictment of Biden' While Official Offers up a Feeble Response
→ What are your thoughts? ←
Scroll down to leave a comment: