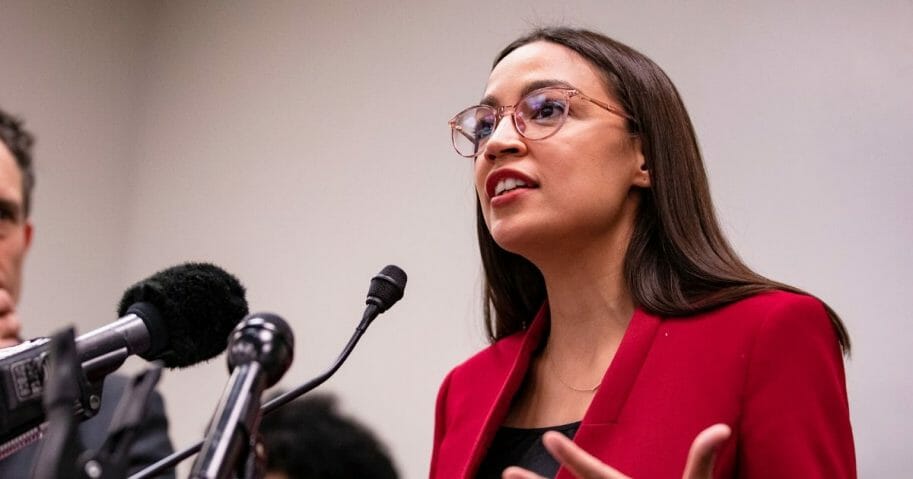 For Alexandria Ocasio-Cortez, election disappointment in the spring could mean she’s in for a crushing fall.

Besides Super Tuesday being a super bust for the socialist Sen. Bernie Sanders, AOC’s chosen favorite to win the Democratic presidential nomination, other Ocasio-Cortez progressive candidates in lower races either lost came up short of an outright victory in the day’s Democratic primary contests.

If this is what progressive looks like, regressive is going to be really ugly for liberals.

As Fox News reported, the showings of three Democratic primary candidates backed by Ocasio-Cortez show the New York freshman congresswoman is hardly the electoral powerhouse her public relations agents in the news media would have Americans believe.

As The Daily Caller reported in June, Cuellar was an obvious target for the Justice Democrats. He is a Democrat who stands out in the increasingly leftist party by opposing abortion and supporting Second Amendment rights, according to CBS News.

Cisneros is an unabashed supporter of the progressive agenda, including the Green New Deal and “Medicare for All,” which made her a favorite of leftists nationally, Politico reported.

While Cuellar’s win in the primary was relatively narrow – 52 percent to 48 percent when The Associated Press called the race, according to Politico — the implications were big.

His stances on hot-button issues should have made him ripe for a primary takedown – like the one that launched AOC’s political career when she defeated then-Rep. Joe Crowley in a June 2018 primary.

Yet Cuellar survived – and that’s not good news for the stridently liberal AOC wing of the Democratic Party.

Meanwhile, in a Texas Democratic primary for the U.S. Senate, progressive candidate Christina Tzintzún Ramirez not only didn’t win the chance to challenge Republican Sen. John Cornyn, she might not even have made it into a runoff with race leader with “MJ Hegar, the Democratic establishment’s favored pick,” Fox reported.

For a Democrat struggling to even get into a runoff to win a primary in Texas, taking on an incumbent Republican senator would be a tall order — and Ocasio-Cortez’s backing is clearly of little help in filling it.

The news was much the same in California, according to Fox, where the progressive Georgette Gomez came in a distant second to the more mainstream Democrat Sara Jacobs in the 53rd Congressional District.

“Another AOC-backed candidate, Georgette Gomez, did make the initial cut and qualified for the general election for California’s 53rd district, located in San Diego county. However, she came in second with 19 percent of the vote against the establishment candidate Sara Jacobs, who received 28 percent. In California, as one of the top two primary vote-getters, Gomez automatically qualifies for the November general election.”

Certainly, there’s no shame in coming in second in a six-candidate field. However, according to primary results on Ballotpedia, Gomez, would need just about every vote that was cast for the other four candidates to overcome Jacobs in the November election.

That’s not very likely, in any electoral context.

The three candidates were all supported by an AOC-backed political action committee called Courage to Change, Fox reported.

The performances of all three showed that what progressives consider “change” isn’t what voters want. And if that’s how these ideas fare in Democratic primaries, what kind of rejection are they going to get in a general election?

The answer seems obvious. Bernie Sanders and his socialism-for-America pipe dream can’t even catch on among Democratic voters – in the United States as a whole, it’s a non-starter.

The performances of the Ocasio-Cortez-backed candidates on Super Tuesday are another good indication of that.

It’s still only March, and the Democratic nomination is far from decided, much less the general election taking shape, but if these spring races are any indication, AOC and her ilk are in for a very hard fall.