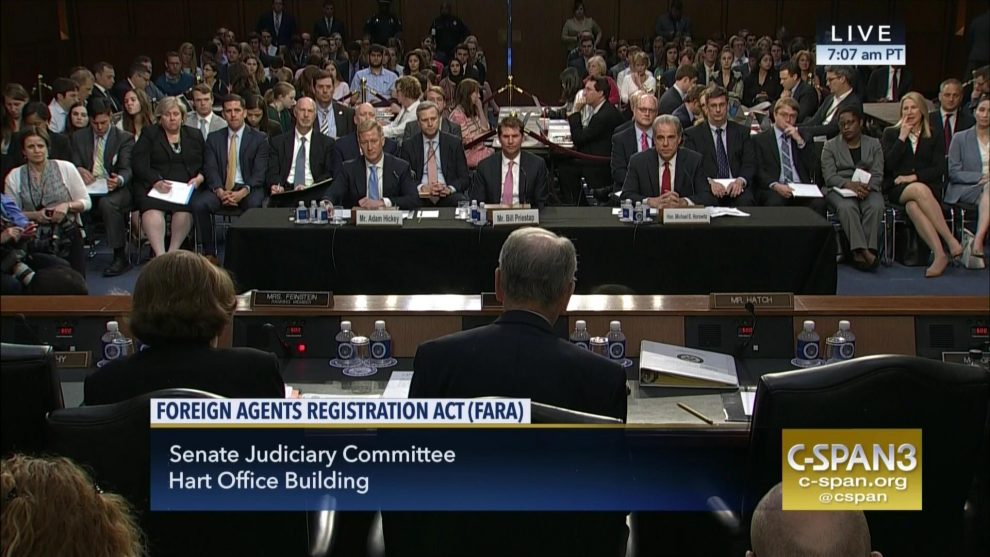 Former Obama White House Counsel and Clinton-linked attorney Greg Craig may soon be charged by the Justice Department for engaging in illegal unregistered overseas lobbying, in a case initially probed by Special Counsel Robert Mueller — a development that would make him the first Democrat to face prosecution amid the long-running Russia investigation.

The case centers on lobbying work that Craig performed in 2012 for the Russian-backed president of Ukraine, Viktor Yanukovych, while Craig was a partner at the law firm Skadden, Arps, Slate, Meagher & Flom. Craig allegedly never registered as a foreign agent under a U.S. law known as the Foreign Agents Registration Act, or FARA, which requires lobbyists to declare publicly if they represent foreign leaders, governments or their political parties.

FARA violations were only rarely prosecuted until Mueller took aim at Paul Manafort, President Trump’s former campaign chairman, for his lobbying work in Ukraine. Manafort, who connected Craig with Yanukovych, has been convicted on numerous bank and tax fraud charges, and was separately accused of FARA violations as well. He was sentenced earlier this month to approximately seven years in prison.

Craig left Skadden last year as his work with Manafort became public. In January, Skadden agreed to cooperate with the DOJ’s registration requirements and paid $4.6 million in a settlement to avoid a criminal prosecution. “We have learned much from this incident and are taking steps to prevent anything similar from happening again,” the firm said in a statement at the time.

As with Manafort’s case, there is no indication that Craig improperly colluded with a foreign government while he was serving in any official capacity. Craig worked as White House Counsel from 2009 to 2010, and previously worked in the Clinton administration on impeachment matters.

Mueller referred the Craig case to New York federal prosecutors, apparently because it fell outside his mandate of determining whether the Trump campaign coordinated with Russia.

New York prosecutors ultimately forwarded the case to the Justice Department in Washington, D.C. in January for a now-imminent final decision on filing charges, The New York Times reported Tuesday.

Mercury and Podesta, which were paid a combined $2 million on the project, then registered under a less stringent lobbying law that doesn’t require as much public disclosure as FARA.

Both firms have said they registered under the Lobbying Disclosure Act, rather than FARA, on the advice of lawyers at Skadden, Arps, Slate, Meagher & Flom, Craig’s former firm. But in court papers, Mueller’s prosecutors suggested the firms were aware they were working on Ukraine’s behalf.

The Times reported on Tuesday that the Podesta probe apparently has not been moved to the DOJ, and that Manahattan prosecutors remain in control of the investigation. In a flurry of new activity in January, though, federal prosecutors began systematically interviewing witnesses and contacting lawyers to schedule additional questioning related to the Podesta Group and Mercury Public Affairs.

Podesta is a longtime Democratic operative whose brother, John Podesta, ran Hillary Clinton’s 2016 presidential campaign; Weber is a former Republican congressman from Minnesota. Neither man has been charged with any crimes. Their firms have defended the decisions by saying they relied on the advice of outside attorneys.

Was the brother of John Podesta paid big money to get the sanctions on Russia lifted? Did Hillary know?

Mercury spokesman Michael McKeon said the firm has “always welcomed any inquiry since we acted appropriately at every step of the process, including hiring a top lawyer in Washington and following his advice. We’ll continue to cooperate as we have previously.”

Foreign lobbying work was central to Mueller’s case against Manafort and his longtime associate Rick Gates, two high-profile Trump campaign officials who pleaded guilty earlier this year and have been interviewed extensively by prosecutors.

The Podestas have been frequent targets of Trump and his associates, who have repeatedly demanded to know why Tony Podesta has not been arrested and charged.

Gates admitted in his plea deal that he lied to Mercury’s attorneys about the project, a fact the lobbying firm has publicly highlighted. The Podesta Group has said it was misled by the European Centre for a Modern Ukraine, citing a written certification from the nonprofit stating it wasn’t directed or controlled by the Ukrainian Party of Regions, one of Manafort’s clients.

For Trump and other Republicans — who have long accused Clinton backers of skirting the law — that explanation amounted to a weak effort to obtain plausible deniability.

“Was the brother of John Podesta paid big money to get the sanctions on Russia lifted?” Trump tweeted in 2017. “Did Hillary know?”