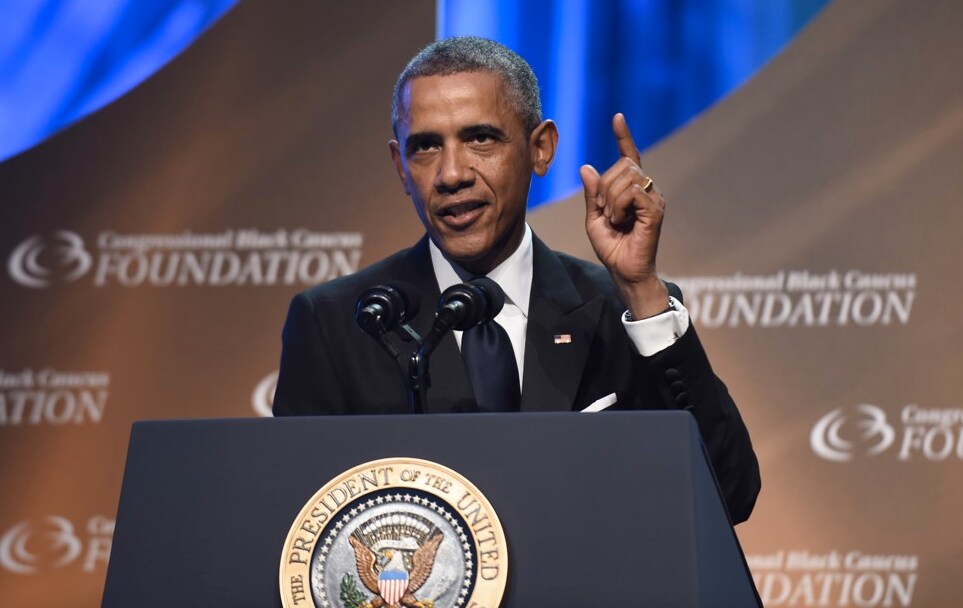 Obama told a rally in Phoenix, Arizona, that demonizing opponents with “over-the-top” rhetoric could result in physical violence:

“One thing is clear, and that is this increasing habit of demonizing political opponents, of just yelling and thinking not just that I disagree with someone, but that they’re evil and wrong,” Obama said. “That creates a dangerous climate. And when we have politicians and elected officials in leadership positions who continue to promote over-the-top rhetoric or make light of it … more people are going to get hurt.”

Obama did not specifically mention Biden, his former vice president. Biden gave a speech at Union Station in which he reprised some of his attacks from his Sep. 1 speech at Independence Hall, casting Republicans as extremist and dangerous to democracy:

Just a few days ago, a little before 2:30 a.m. in the morning, a man smashed the back windows and broke into the home of the Speaker of the House of Representatives, the third-highest ranking official in America.

The assailant tried to take Paul hostage. He woke him up, and he wanted to tie him up. The assailant ended up using a hammer to smash Paul’s skull.
…

Those were the very same words used by the mob when they stormed the United States Capitol on January the 6th when they broke windows, kicked in the doors, brutally attacked law enforcement, roamed the corridors hunting for officials, and erected gallows to hang the former Vice President, Mike Pence.

It was an enraged mob that had been whipped up into a frenzy by a President repeating over and over again the Big Lie that the election of 2020 had been stolen.

It’s a lie that fueled the dangerous rise in political violence and voter intimidation over the past two years.

He has abused his power and put the loyalty to himself before loyalty to the Constitution. And he’s made a Big Lie an article of faith in the MAGA Republican Party — the minority of that party.

Biden ignored the political violence that was used by the left to attack former President Trump and his supporters, such as:

Violent attacks by left-wing activists on Trump supporters leaving a rally in California in June 2016
Riots in November 2016 in several Democrat-run cities after Trump was announced as the winner of the election
Riots in Washington, DC, during the inauguration of President Donald Trump in January 2017
Violent rhetoric at the Women’s March, and threats against Trump supporters throughout the Trump presidency
The shooting and wounding in 2017 of Republican members of Congress on a baseball field by a crazed left-wing gunman
The summer of rioting by Black Lives Matter supporters — tolerated or encouraged by Democrats — in the summer of 2020
Threats of rioting prior to the 2020 presidential election, forcing businesses in Democrat-run cities to board up their windows
The attempted stabbing of New York Republican gubernatorial nominee Rep. Lee Zeldin at a campaign rally
The alleged murder of a teenager in September after a North Dakota man said he suspected the boy was a Republican
The vicious beating of a volunteer for Sen. Marco Rubio (R-FL) by men who said Republicans were not allowed in the area
The alleged biting of a supporter of Republican gubernatorial candidate Tudor Dixon by a fan of Gov. Gretchen Whitmer (D)
Death threats last week against Republican gubernatorial nominee State Sen. Darren Bailey in Illinois
A physical attack on New Hampshire Republican nominee for Senate Don Bolduc (allegedly by a local libertarian)
The attempted assassination of Justice Brett Kavanaugh following the leaked draft of the Supreme Court’s Dobbs decision overturning Roe v. Wade
The fire-bombing and targeting of pregnancy centers and Catholic churches by pro-abortion activists in the wake of the Dobbs decision
In his September remarks, Biden said that “Donald Trump and the MAGA Republicans represent an extremism that threatens the very foundations of our republic,” and that a Republican Party that supported Donald Trump was “a threat to this country.”

See also  Klain: Biden Has ‘Managed the Largest Land War in Europe Since Truman’ as Part of Record of Accomplishments

Obama, who once claimed his own political opponents were making “common cause” with the enemies of America because they opposed his nuclear deal with Iran, also warned against the “erosion of just basic civility and democratic norms” in America today.