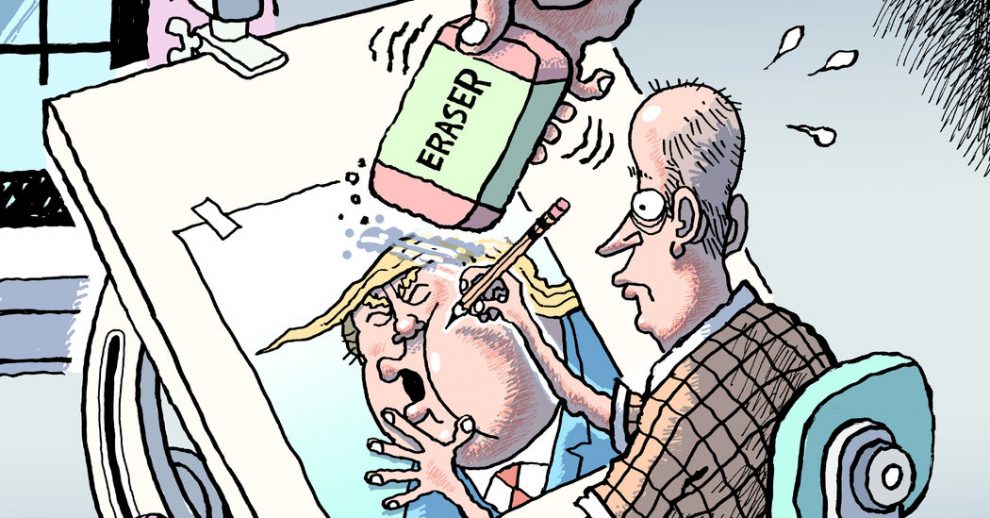 The New York Times editorial board blamed President Donald Trump for the paper’s decision to publish an anti-Semitic cartoon.

The paper’s editorial board said in a Tuesday editorial that the president’s failure to stop a rise in anti-Semitism played a part in the image that “came to be published” in its pages.

After acknowledging the paper published a “bigoted” and “appalling” anti-Semitic cartoon in the headline and opening sentences of the editorial, the board quickly shifts to lecturing readers about the “insidious” nature of anti-Semitism and the particular danger of anti-Semitic imagery in this political moment.

The rest of the editorial amounts to one excuse: the paper published an anti-Semitic cartoon because of a larger context of hate fostered by Trump, not because of its own failure to vet the content that hits its pages.

“The cartoon was chosen from a syndication service by a production editor who did not recognize its anti-Semitism,” the board writes. “Yet, however it came to be published, the appearance of such an obviously bigoted cartoon in a mainstream publication is evidence of a profound danger — not only of anti-Semitism but of numbness to its creep, to the insidious way this ancient, enduring prejudice is once again working itself into public view and common conversation.”

If an openly anti-Semitic cartoon makes it into the international edition of @nytimes, you know how far Jew-hate has creeped back into the mainstream. This cartoon was handpicked, signed off, published. Not an honest mistake. pic.twitter.com/YBYwwlaaSF

The board cites an even sharper rise in Europe, which it gratuitously notes is where the cartoon originated and cites a number of recent attacks against Jews in Europe, and later in the piece, the synagogue shooting that happened last week. Trump hasn’t done enough about this, the board argues, right before it mentions his condemnation of its own blatantly anti-Semitic slip.

“The responsibility for acts of hatred rests on the shoulders of the proponents and perpetrators,” the board writes. “But history teaches that the rise of extremism requires the acquiescence of broader society. As anti-Semitism has surged from the internet into the s

treets, President Trump has done too little to rouse the national conscience against it.”

Trump called the cartoon “terrible” in a tweet condemning it and said it marks a new low for the paper.

The New York Times has apologized for the terrible Anti-Semitic Cartoon, but they haven’t apologized to me for this or all of the Fake and Corrupt news they print on a daily basis. They have reached the lowest level of “journalism,” and certainly a low point in @nytimes history!