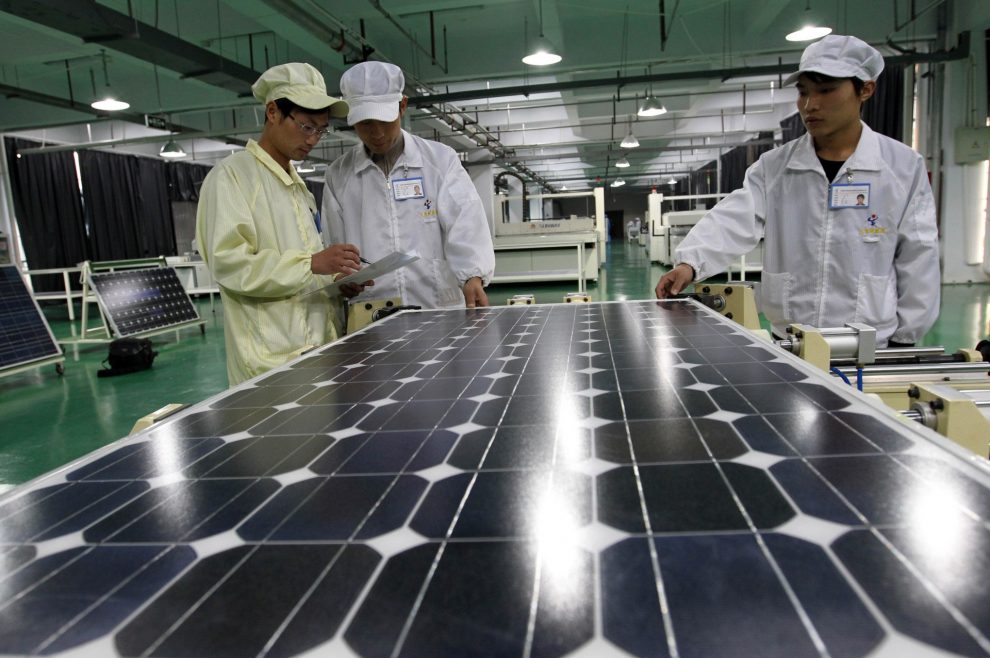 Now they tell us. That is, now they are telling us that “green jobs” won’t be such good jobs after all.

We get this blunt assessment from the New York Times, the most important newspaper in the country and without a doubt the numero uno medium by which Democrats communicate with each other.

Which is to say, if the Times is right—more from that newspaper in a moment—then top Democrats were, uh, wrong when they promised that the Green New Deal or some variant would rebuild the middle class.

Our response to climate change can create more than 10 million well-paying jobs in the United States that will grow a stronger, more inclusive middle class enjoyed by communities across the country, not just in cities along the coasts.

So those were the political promises; and from the election results, it would seem that many voters believed them.

And the honeyed words about green jobs keep flowing. Earlier this month, Rep. Alexandria Ocasio-Cortez declared that the Green New Deal “is a blueprint to create millions of good jobs.”

But what, according to the Times, is the real deal about the Green New Deal? On July 16, under the headline, “Building Solar Farms May Not Build the Middle Class,” a news article delivered the bad news about good jobs:

On its current trajectory, the green economy is shaping up to look less like the industrial workplace that lifted workers into the middle class in the 20th century than something more akin to an Amazon warehouse or a fleet of Uber drivers: grueling work schedules, few unions, middling wages and limited benefits.

Yet today, working Americans—the folks who once might have looked forward to middle-class-making blue- and white-collar jobs in factories—are confronting a bitter reality. As the Times story continued, “There’s a nagging concern among worker advocates that the shift to green jobs may reinforce inequality rather than alleviate it.”

To be sure, the news isn’t so bad for Times readers themselves because few, if any, of them are looking for regular work in factories. Instead, Times readership tends to be wealthy and white collar. As the liberal New Republic noted two years ago, the median income for Times subscribers is $191,000; the magazine added, “It’s a rag for the East Coast rich.”

Indeed, that upper-income-tilt might explain why even an article about blue-collar jobs was punctuated with an ad for Times’ Wine Club; the tagline: “Join the Most Exclusive Club in Town: Private access to the world’s best wine, shipped to your door.”

So we can gather that Times readers can learn about the deflating of the green-jobs balloon, but they won’t experience it first hand.

Now we can ask: Why the wide gap between the good-jobs promise and the looming bad-jobs destiny? The Times points to f’rinstance: In the past, electricity came from utility plants, typically fired by coal, oil, or gas. These plants were locally constructed, using local companies and local labor—including, of course, lots of skilled labor.

By contrast, the Biden administration wants more power to comes from solar, which means solar panels—80 percent of which are made in China. (The U.S.-made share of the world market for panels is in the low single digits).

It’s worth noting that the Biden folks are considering a plan for insourcing solar panel manufacturing, although experts say it’s an “uphill climb” in a world glutted with foreign makers. Moreover, Congressional Democrats are toying with new green-inspired restrictions on imports from China, although such restrictions are at best a long way from enactment.

Indeed, it’s far from clear that Congress as a whole is on board with any plan for more Made in USA solar panels. After all, the greens want to get going on climate change right now, not wishing to wait for the U.S. to stand up new domestic factories and supply chains.

In addition, free traders have never worried about domestic manufacturing, so they don’t mind importing solar panels. Similarly, libertarians oppose anything that smacks of industrial policy.

And of course, even more lawmakers fear the coming of 1970s-type inflation, and so they are shying away from more spending; they might be mindful of a new report from the centrist Committee for a Responsible Federal Budget, which finds that that the Democrats’ $3.5 trillion “infrastructure” bill would likely cost $5.5 trillion. That’s an overrun of almost 60 percent.

So we can see: If the country goes solar, not only will traditional energy jobs shrink, but most likely, the solar jobs won’t pay well. Oh and also, there won’t be that many of them, since maintaining solar panels with no moving parts is a lot less labor-intensive than managing a whole power plant, including all those turbines.

We can add that the same general point holds true for other forms of renewable energy. Renewables are less labor-intensive; the real action is running the computers that run the grid. Moreover, the simpler the task at the point of production, the more likely it is that the work can be done by machines or robots.

For all these reasons, it’s easy to see how a Silicon Valley tech company such as Google could end up controlling most of the nation’s green energy supply. That’s great for profits for Big Tech, not so great for jobs on Main Street.

To get a better sense of the impact of tech (and related finance) companies on the job market, we might consider findings from the St. Louis Federal Reserve Bank, showing the long-term decline of wages as a percentage of national income, from 51.6 percent in 1970 to 43.4 percent in 2019—that being the latest year for which data are available. To put those numbers another way, over the last half-century, the share of national income going to wages fell by 15.9 percent.

Yes, that’s right: Working Americans of all classes have seen their share of the national wealth fall by almost a sixth. And now, if the Times is to be believed, that skid could continue.

Indeed, if we step even further back, we can see other trends conspiring against middle class jobs. Notably, we can look to author Alec MacGillis; his new and highly critical look at Amazon, Fulfillment: Winning and Losing in One-Click America, vivifies the company’s impact:

Business activity that was once dispersed all across the country—from mom-and-pops to department stores—is now flowing to a single company based in Seattle, which has been transformed into a hyper-prosperous tech hub with soaring levels of inequality.

So how could wages go up? The most obvious answer is the workings of supply and demand; that is, workers should hope for more demand for labor.

The relative scarcity of labor has always been the secret sauce of American prosperity. As far back as 1751, Ben Franklin noted that America was becoming more prosperous than Europe; and he noted that one of the reasons was the high ratio of resources to workers:

So vast is the Territory of North-America, that it will require many Ages to settle it fully; and till it is fully settled, Labour will never be cheap here, where no Man continues long a Labourer for others, but gets a Plantation of his own, no Man continues long a Journeyman to a Trade, but goes among those new Settlers, and sets up for himself, &c.

Nearly three centuries later, America is still lightly populated, at least in a relative sense. In fact, of all the world’s 200+ countries, our population density ranks 174th.

Of course, Americans don’t have as much access to that land as they should. And why not? Expansive—and expanding—public land ownership, coupled with new environmental restrictions, have teamed up to help flatline rural employment. And so by design, the population is being pushed off the land; the better, one supposes, for plutocrats to enjoy watching the buffalo roam.

So it’s no wonder, as rural chronicler Robert Cushing puts it, “The overwhelming population growth story of the past 50 years has been the increasing concentration of people in large central cities and their suburbs.”

The bottom line: Many of the resources that ought to be available to boost wages and wealth are being locked away.

In addition, of course, there are the familiar issues of border control and low-wage competition. Big as this country is, the world is bigger; and many of the world’s 7.5 billion non-Americans would like to be Americans.

Yet if protecting American labor from the world is one way to raise wages, another way is protecting labor within the U.S. itself. And that brings to mind… labor unions. At least for the private sector, unions have long been in eclipse, and yet the historical record shows that they raise wages.

For instance, after the Big Three automakers (for the benefit of younger readers, that’s GM, Ford, and Chrysler, not Toyota, Honda, and Kia), were unionized in 1937, wages rose sharply. According to the Department of Labor, from 1939 to 1966, wages for tool and dye makers more than tripled, and pay for janitors nearly quadrupled. And if we compare those pay increases to the inflation rate, we see workers were coming out way ahead.

To be sure, unions are controversial. And so Michael Lind, a professor at the University of Texas, has been championing another idea: wage boards. That is, public-private bodies that would set wages sector by sector. These wage boards are common in Europe; and where they have been put in place, wages go up.

Needless to say, as with unions, wage boards are controversial. And so those eager to create more good jobs at good wages might look to still other ideas, including new technology, as a way of creating new industries fostering growth.

One such technology is carbon capture and storage (CCS), which this author has been writing about for years. With CCS, we could keep our fossil fuel plants in use, while still decarbonizing the atmosphere. That’s a win-win that should appeal to both right and left, to red-staters, to blue-staters, and to greens. (Needless to say, the hardcore greens loathe CCS, including inside the Biden administration, and yet in the end the need to power this country is going to emerge as the stronger force—if not in this administration, then the next.)

Indeed, CCS could even be the source of a renaissance in the long-suffering hinterlands, Making Rural America Great Again.

Of course, it’s a given that every solution to the jobs-and-wages crisis is going to be controversial. And yet until we come up with a solution, this much is incontrovertible: If present trends continue, the middle class will shrink.

The New York Times says so, and maybe just this once, there’s good reason to think it’s right.