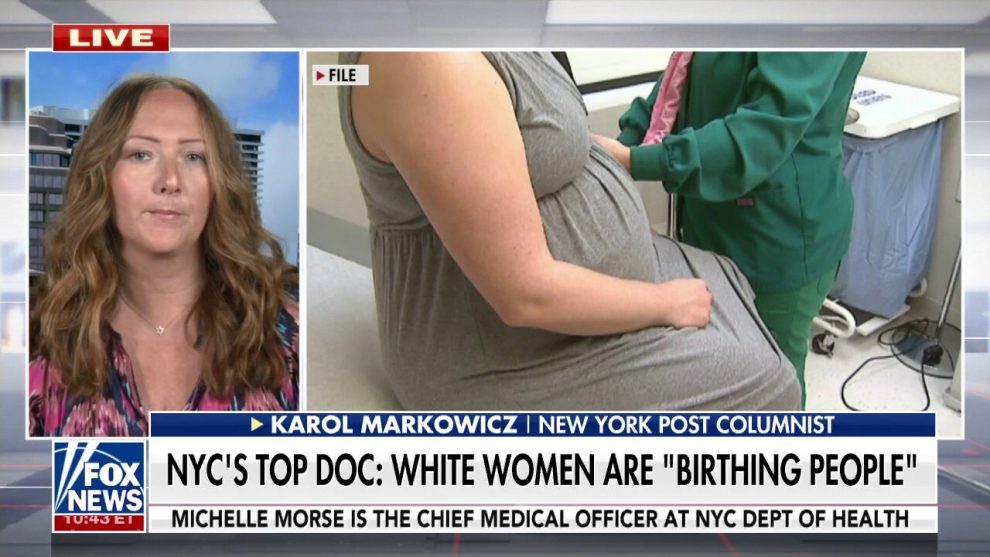 The latest health official to show that she knows or cares nothing about health but only about keeping up with the Left’s various enforced delusions is Dr. Michelle Morse, the chief medical officer and deputy commissioner for the Center for Health Equity and Community Wellness for the New York City Department of Health. Morse has encountered controversy after referring to white mothers as “birthing people” but to black and Hispanic mothers as just that: “mothers.” But it wouldn’t be 2022 if Morse had corrected herself, or been corrected, in a sane, fact-based manner. No, by the time it was all over, Morse looked as if she was the voice of reason.

Morse tweeted on March 23, “The urgency of this moment is clear. Mortality rates of birthing people are too high, and babies born to Black and Puerto Rican mothers in this city are three times more likely to die in their first year of life than babies born to non-Hispanic White birthing people.”

Why she made the distinction between white “birthing people” and black and Puerto Rican “mothers” remains unexplained. Was it just a slip-up, an honest mistake from someone anxious to be politically correct but tweeting while tired? Was Morse in a hurry, or simply overwhelmed with having constantly to navigate the minefield of what is currently acceptable to say and what is not? Was she implying that blacks and Puerto Ricans are less accepting of trendy gender nonsense than whites? Another possibility, given the prevailing anti-white racism of our age, is that Morse did not think white women are worthy of the appellation “mother.”

That last possibility was unlikely, given that in follow-up tweets, Morse referred to “the birthing person or their child.” And in another, she wrote, “We need to support birthing people through all aspects of their birthing experience – perhaps the most beautiful and personal gift we can share with birthing people as they navigate the groundbreaking life changing experience of creating life. That is what doulas do.”

So “birthing people” it is, and expecting sanity from the New York City Health Department was quixotic at best. The department quickly issued a semi-apology for Morse’s tweet (although it is still up as of this writing, two weeks later). But instead of trying to bring the discourse at least within hailing distance of reality by affirming that white women with children were mothers, as were black and Hispanic women, the department went full-crazy. Morse’s tweet, it explained, was an “oversight,” and thus had no deeper significance. Nonetheless, “we apologize for inadvertently gendering Black and Puerto Rican birthing people.”

The Department of Health was demonstrating the all-too-common hubris of the age. The department did nothing in the way of “inadvertently gendering Black and Puerto Rican birthing people.” The women of any and all races who give birth to children were actually gendered from birth, without any help from any health department. They weren’t “assigned” a gender by a doctor or any other human being; their gender was blazingly obvious.

These are simple truths, but this is not a simple age, or one that has any patience for truths that don’t fit the popular narrative. As far as the Leftist establishment is concerned, using the ridiculous term “birthing people” isn’t insulting and erasing women or kowtowing to the tiny percentage of women who like to pretend they are men or men who like to pretend they are women. No, it’s just the “inclusive” thing to do. The National Abortion Rights Action League explained, “When we talk about birthing people, we’re being inclusive. It’s that simple. We use gender neutral language when talking about pregnancy, because it’s not just cis-gender women that can get pregnant and give birth. Reproductive freedom is for *every* body.”

In reality, it’s only women who can get pregnant and give birth, and none of those who can get pregnant and give birth are anything but women. It’s absurd that this even has to be written, but the brouhaha over Morse’s tweet, and especially the health department’s clarification, is an indication of how far the insanity has advanced. The madness may only recede when women have had enough of being demeaned and erased by those who pretend that gender is fluid and changeable. The destruction of women’s sports has begun to awaken many women to what is happening, and since reality always wins out in the end, the awakening is certain to continue.