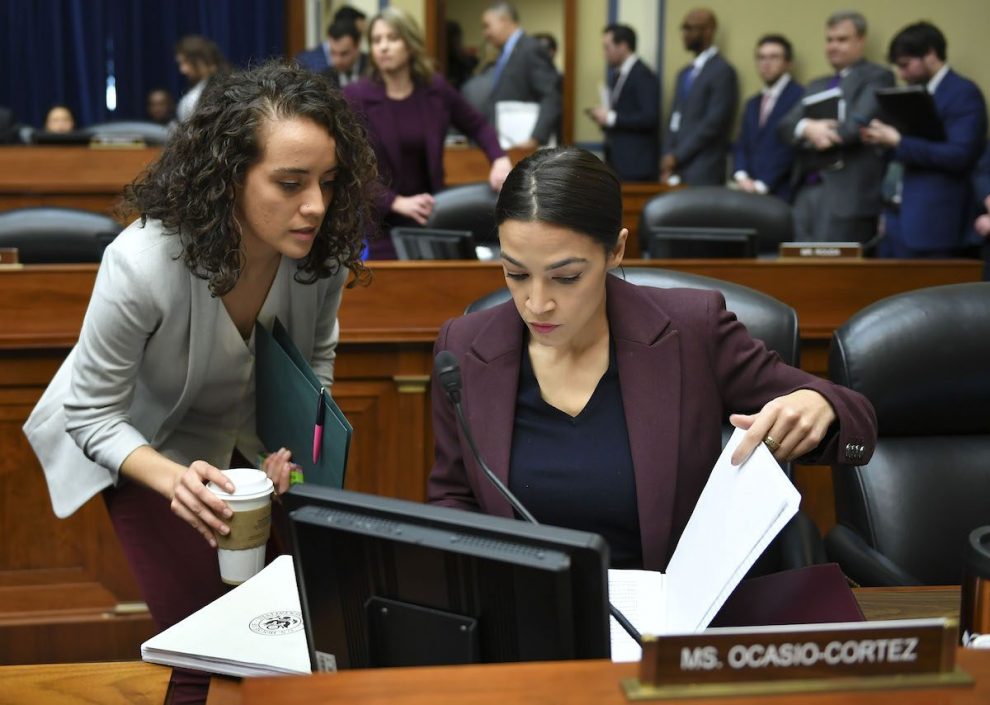 Rose then dared Ocasio-Cortez to recruit a candidate to run a primary challenge against him, saying he would “lay out the red carpet.”

The comments from Rose, a 32-year-old U.S. Army veteran who served in Afghanistan — earning Purple Heart and Bronze Star for his service — followed multiple questions and comparisons to the firebrand New York congresswoman, who’s facing ridicule over the Green New Deal, her plan for revising U.S. energy policies.

Rose — who has also previously criticized another far-left freshman Democrat, U.S. Rep. Ilhan Omar of Minnesota, over her remarks about Israel and Jewish lawmakers in the U.S. — told the MetroFocus program host that while he sees climate change a pressing issue that requires a quick and bold response, Ocasio-Cortez’s plan is just not that solution.

“This is not the time for milquetoast incrementalism,” he said. “It just isn’t. But with that being said, nothing about what I just said would provide a justification for a massive socialist economic policy platform. Just not needed.”

He dismissed the Green New Deal goals, such as job and housing guarantees, as economically unfeasible, saying the proponents of the deal are lying to voters.

“There’s no need to lie to voters right now,” he said. “We don’t need the Democratic version of ‘repeal and replace.’”

“There’s no need to lie to voters right now … We don’t need the Democratic version of repeal and replace.”

The Green New Deal is estimated to cost up to $93 trillion or $600,000 per household, according to studies. The radical measure proposes the transformation of the U.S. economy to cut emissions in addition to retrofitting and replacing every building in an effort to reach the goal.

But Rose went on to slam Ocasio-Cortez following a story that she’s compiling a “list” of Democrats that will face a primary challenge from progressive Democrats for siding with Republicans in the House on an amendment to notify the federal agency Immigration and Customs Enforcement (ICE) whenever an illegal immigrant attempts to buy a firearm.

“She’s going to keep a list,” Rose said, looking somewhat annoyed. “This is very simple because I’m not one to deal in subtleties. I think it’s best not to be passive-aggressive. If she wants to primary me, if the Justice Democrats want to primary me, I’ll lay out the red carpet. We can settle this at the polls.”

“This is very simple because I’m not one to deal in subtleties. I think it’s best not to be passive-aggressive. If she wants to primary me, if the Justice Democrats want to primary me, I’ll lay out the red carpet. We can settle this at the polls.”

This isn’t the first time Rose has gone after Ocasio-Cortez. After she tweeted that the U.S. invasion of Afghanistan to combat Al Qaeda in response to the Sept. 11, 2001, terror attacks was “disastrous” and “wrong,” Rose spoke out.

“I believe it’s long past time we end the war in Afghanistan,” Rose told the New York Daily News, “but I strongly disagree with the idea that the invasion was wrong on moral or national security grounds.

“After our city and country were attacked we were very clear with the Taliban — either they give up Usama bin Laden and Al Qaeda, or we would come and get them ourselves,” he added. “They chose to protect Usama bin Laden, and they rightfully paid the price.”

Rose was equally direct in his past criticism of Omar, who asserted that some Jewish lawmakers in the U.S. may have divided loyalties regarding the U.S. and Israel.

Rose was elected to Congress in 2018 after defeating an incumbent Republican in the 2018 midterm election for New York state’s 11th Congressional District that includes parts of the New York City borough of Brooklyn and all of Staten Island. Ocasio-Cortez represents the 14th district, which includes parts of the Bronx and Queens.