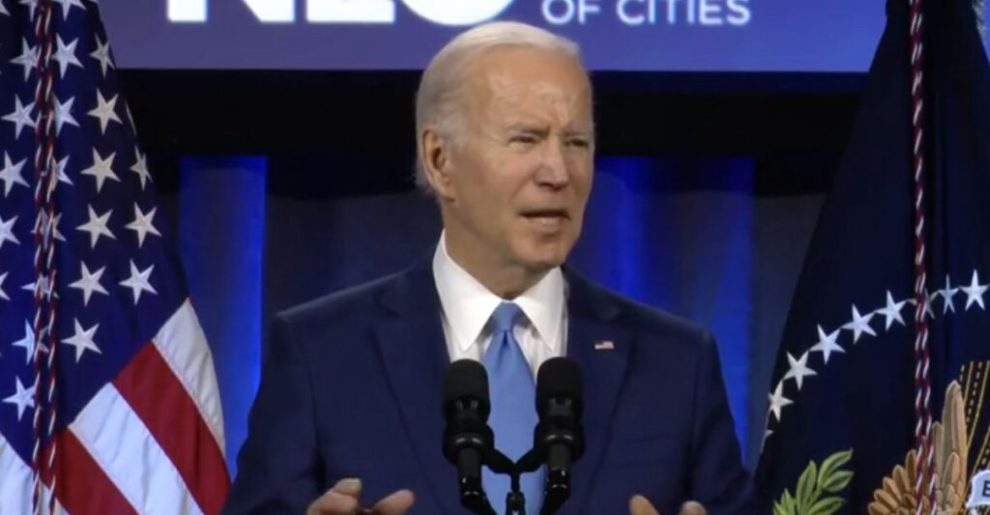 “Now the second big reason for inflation is Vladimir Putin and gas prices,” Biden claimed. “Not a joke.”

The President spoke about rising inflation during his speech in Washington, DC, to the National League of Cities Congressional City Conference.

Biden falsely blamed Putin for the $1.05 rise in gas prices, arguing the Russian president began surging troops at the Ukrainian border at the beginning of the year, which fueled higher prices.

“Make no mistake the current spike in gas prices is largely the fault of Vladimir Putin,” Biden said.

But gas prices were already rising on Biden’s watch before Putin began building up troops in Ukraine and did not spike until Russia actually escalated their invasion.

Prices rose about eight cents per gallon in January and did not spike until March when Putin significantly escalated his war in Ukraine.

During his speech, Biden claimed his $1.9 trillion American Rescue Plan had “nothing to do” with inflation, even as he took credit for rescuing the economy from the coronavirus pandemic.

“Because the rescue plan boosted strength and speed and of our recovery, Americans had more money in their pockets and during the pandemic they wanted to spend that money,” he said.

People stuck at home because of government coronavirus lockdowns, Biden argued, chose to spend their extra money on products, which only worsened supply chain issues.

“Rescuing our economy didn’t cost this problem. We’re working to fix it,” he said.

But Biden failed to mention that inflation spiked sharply in March 2021, after his first $1.9 trillion spending bill passed.

Here’s the Feb. wage growth vs the inflation rate chart – BLS data for both. Hard to add anything to what the chart shows. Basically, it’s ugly for American workers. Wage growth levels while inflation continues to surge. This is Biden, not Putin. pic.twitter.com/CzHwM3Bho6

In February, prices were up 0.8 from January – even before Putin even escalated his war in Ukraine.