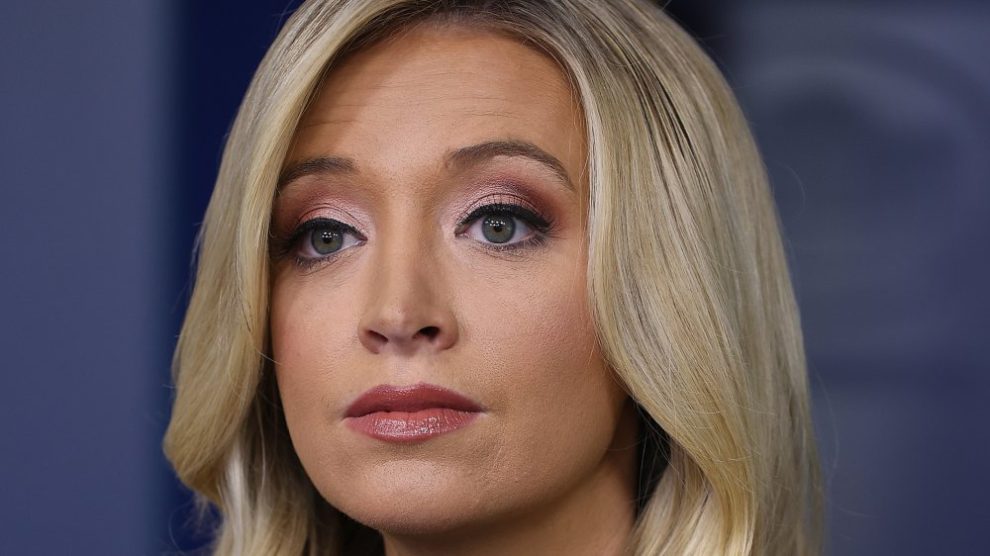 Kayleigh McEnany made a name for herself as Donald Trump’s last White House press secretary. Armed with binders of background information, and often using stinging video montages to rebuke the Democrats and their radical base, she handled the White House press corps with great poise. She used facts to support her answers and deftly batted back some truly stupid questions posed by the media, without ever breaking a sweat. Contrast that with the Biden White House press babes, simpering truth deniers who unravel at the most benign of questions from Fox News’ Peter Doocy.

McEnany now finds herself on the other side of the media microphone as a Fox News contributor and regular on its midday show, Outnumbered. Like Dana Perino, her counterpart on Fox’s The Five, McEnany brings a unique perspective to her role as commentator, often relaying how her experience working in the press shop of the White House informs her opinions on today’s news. She’s also not afraid to offer advice.

Take today, for instance. As the panel members of Outnumbered discussed election results, host Harris Faulkner brought up the topic of the 2024 presidential election. McEnany responded:

‘I know there’s a temptation to starting talking about 2024 — no, no, no, no, no,’ McEnany said on Wednesday’s edition of ‘Outnumbered.’

‘2022 is not over. Every Republican energy needs to go to grinding the Biden agenda to a halt, and that could go straight through the state of Georgia.’

When pushed by Harris if that included her former boss, Donald Trump, McEnany was emphatic in saying, “I think he needs to put it on pause, absolutely.”

Trump press secretary turned Fox host Kayleigh McEnany says Trump should put his campaign declaration on pause until after a Georgia Senate runoff, pointedly does not recommend he go campaign for Walker but says DeSantis should. pic.twitter.com/bklkjUxqa1

McEnany’s advice is aimed directly at the upcoming runoff race between Herschel Walker and Raphael Warnock for the U.S. Senate seat in Georgia. It could be a replay of 2020, when both Georgia senate seats went into runoffs, with control of the Senate at stake. We’re not quite there yet, as a few Senate seats are still to be decided, but the scenario is eerily familiar. The runoffs were a disaster for Republicans, with Trump urging the base to stay home and not vote as revenge for possible election fraud in their state. Enough of them did that the Dems took both seats and control of the tied Senate, with Vice President Kamala Harris acting as the tie breaker.

Kayleigh McEnany clearly wants to avoid another Georgia senate calamity by priming Walker for a win. The best way to do that, she says, is a lot more Ron DeSantis and a lot less Donald Trump.

Asked by Faulkner whether the former president should stump in the Peach State, McEnany replied: ‘I think we’ve got to make strategic calculations. Gov. DeSantis, I think he should be welcome to the state, given what happened last night. You’ve got to look at the realities on the ground.’

This will be a bitter pill for Trump to swallow. By all accounts, he’s eager to announce another run for the White House and not quite as eager to shoulder any responsibility for the GOP’s underperformance last night. McEnany knows Trump well enough to realize his 2024 announcement is likely his only priority at this point, with the possibility of it hamstringing Walker’s ability to win not much of a consideration at all. He could finally be the king-maker he wants to be simply by staying in the background, as McEnany suggests, at least until after the runoff on December 6.

Now, the question is: will Trump listen?